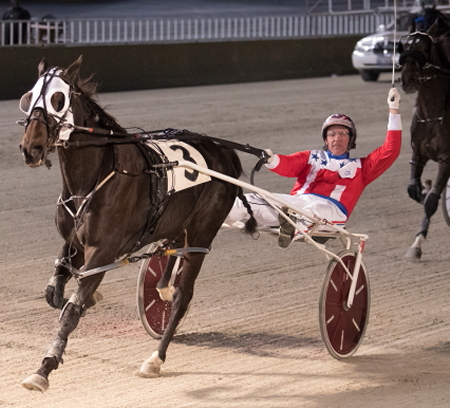 A three race losing skid at Hawthorne would get a yawn from most harness racing players but not when the pacer is the two-time Illinois Harness Horse of the Year Fox Valley Gemini.

The star of the Terry Leonard Stable is zero for three this year at the meet. The now five-year-old ICF gelding had never dropped more than two straight at Hawthorne going into this season.

In fact the Jim Ballinger owned standout won his first nine career starts on the mile oval and also rattled off a six and a four race winning streak last year on the local scene while on his way to his third consecutive Night of Champions title.

The “Two” is significant because it means that Castle Flight, a romping winner of the last pair of Hawthorne Opens, has been written out of Saturday’s feature and will be a spectator rather than a participant this weekend.

Fox Valley Gemini, allocated the four post in the five horse headliner, finished second best a week ago to Castle Flight. He’ll open as the 6-5 favorite.

The Jim Eaton trained Account Rollover (programmed 9-2), was assigned the five-slot after winning the meet’s Feb. 15 Open over Castle Flight and finishing second to the Derek Burklund trainee a week later. The now nine-year-old Account Rollover (Todd Warren) boasts 34 lifetime victories, a mark of 1:50 flat, taken at The Meadowlands at the age of five, and over $327,000 in career earnings.

Ponda’s Prospect has had past success on Hawthorne Opens. In 2018 the now six-year-old gelding captured four Opens and the gelding added another to his resume last season.

They’ll face some tough foes, including Spunky Bottom Girl (pp 1, Mike Oosting), a 1:57.1 victor last week and Pepin Coolie (pp 8, Casey Leonard), third in the same race, his first outing of the year. The latter was a four-time winner at the 2019 Hawthorne meet.