Homepage
You are here: Home1 / Mike Paradise2 / “Gemini” Back Outside and with Company

After three weeks of some well-deserved R & R the two-time Illinois Harness Horse of the Year Fox Valley Gemini returns to work Friday night at Hawthorne.

The pride of the Terry Leonard stable will carry a six-race Hawthorne Open Pace winning streak into the $12,000 headliner, when regular driver Casey Leonard takes the talented 5-year-old ICF to the gate for Friday’s fourth race.

With those six consecutive Open Pace triumphs and an amazing record of 26 wins in 27 starts, on what is obviously his favorite track, Fox Valley Gemini once again has been assigned to start from the 10-hole, this time in a six horse field. 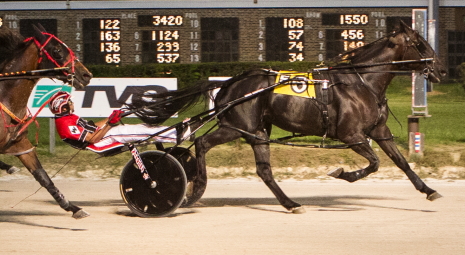 Stuckey Dote (Kyle Wilfong), was much the best in the July 20th Hawthorne Open and that performance facilitated the pacer to a nine-hole assignment for Friday night. (Four Footed Fotos)

However, unlike his previous three winning Open starts from the furthest outside slots, this time around Fox Valley Gemini will have company, and familiar company at that. His stable-mate Stuckey Dote (Kyle Wilfong), was allocated the nine-post by the Hawthorne Racing Office.

Stuckey Dote earned the “handicap” after demolishing the July 26th Open Pace field by one and one-half lengths, racing first over and did it well in hand at the end of a 1:51.2 mile. A week earlier, the six-year-old black gelding captured a $25,000 Minnesota sired preferred event at Running Aces in 1:51 flat.

It’s going to be a strange sight Friday night to see four horses inside going to the gate, a space of five slots, and then the Terry Leonard dynamic duo of Stuckey Dote and Fox Valley Gemini, with their noses on the starting gate in slots nine and ten, respectively.

One of the four inside horses is another Terry Leonard trainee. He’s Ponda’s Prospect (pp 2, Ridge Warren) and the five-year-old gelding owns a June 28th victory over Stuckey Dote.

Perry Smith’s six-year-old pacer, Rising To the Top, looks dangerous moving from last week’s eight post to the three Friday. The pacer usually comes home under 27 seconds and was a Hawthorne Open winner just a few weeks ago.

Feelnlikearockstar (Luke Plano), with the pole position, and Lincolnjames (Luke Plano), an Open winner on July 12th, could be the pacers sprinting away from the starting gate and either horse could be cutting the early fractions.

While Fox Valley Gemini’s tenth place finish in the $50,000 Dan Patch Free For All was disappointing, to say the least, I tossed the race out when handicapping Friday’s Open.

They’ll be thundering down the stretch on the Springfield mile oval Friday afternoon, when the State Fair begins its 2019 meet with a bevy of 2 and 3-year-old ICF stake eliminations and prep races. First post is 12 noon. (Four Footed Fotos)

“Gemini’s” fate pretty much determined when the horse landed the outside nine-slot in a 10-hotrse field with a “trailer” and plenty of early speed inside. As you can see, by the July 20th past performance line, they got down to the first quarter in a rapid 26.2 seconds and the race went in 1:50 3 on a five-eighths oval with “Gemini” really never in the hunt.

First post on the ten race card is 12 noon and wagering will be available on the ADW platforms in Illinois.

Just about all of the two-year-old leading point earners thus far in the various Night of Champions ICF stake series will make the trip to the Illinois State Capitol for a shot at next week’s ISCFC championships.

They’ll be joined by the leading drivers on the Windy City circuit. Most will “double-up” for the day and head back to Chicago to earn another paycheck competing on Hawthorne’s Friday evening’s program.