In this case the “He” is the talented three-year-old ICF pacer, Fox Valley Gemini, winner of his first 16 career starts before the Yankee Skyscraper was defeated in both of last month’s starts at the Springfield State Fair.

The Terry Leonard trainee was second best in his elimination and a particularly disappointing fourth place finish followed in the Springfield Final. Fox Valley Gemini was beaten three and one-half lengths by the 1:50.3 winner You’remyhearthrob while pacing a sluggish 29.3 last quarter for driver Casey Leonard. 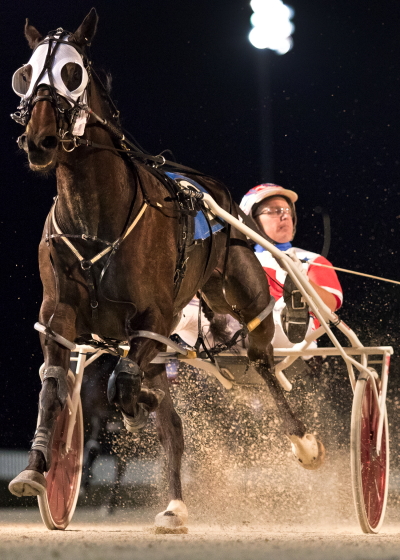 However, a month of R&R and some vet work, then saw the 2017 Illinois Horse of the Year, crush his Incredible Finale final series leg foes last Friday by widening seven plus lengths in 1:51.1, coming home in 26.4, under a firm hold with Casey’s whip tucked under his arm.

“Fox Valley Gemini picked something up at Springfield or before we got there,” said Casey. “We got him back home and took care of the problem and got his blood work straightened out. The rest also did him a lot of good. He came off the layoff and raced really well.”

Casey had Fox Valley Gemini in third, in last week’s fourth Incredible Finale leg, while the pacesetter Frontier Frank rattled off a quick 55.3 first half. Leonard tipped his horse out in the last turn, zoomed by the retreating leader, and won for fun, increasing the pacer’s career bankroll to $213,870 for Atwater, Illinois owner, Jim Ballinger.

Fox Valley Gemini will have to deal with You’remyhearthrob, and others, in Saturday’s $160,080 Incredible Finale Championship. Trainer Brett Wilfong, also had his homebred pacer ready to rumble in his series division, easily prevailing in 1:52.3.

Driver Kyle Wilfong had You’remyhearthrob on top before the first turn and with no challengers, the even-money favorite coasted to modest fractions of 28 flat, 56.3 and 1:25.2 before Kyle asked for anther gear and You’remyhearthrob delivered, pacing a 27.1 last quarter with more in the tank.

Stonedust Impresses: Another one of Casey’s potential winning drives in Saturday’s Night of Champions is the Hawthorne newcomer Stonedust in the $45,000 Robert S. Molaro for ICF male pacers age three and up. 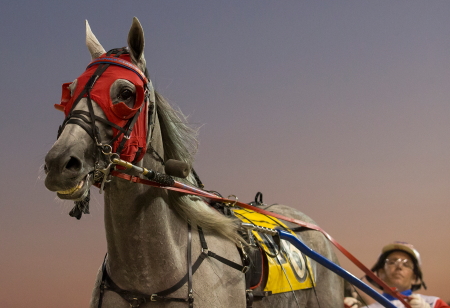 The striking gray pacer Stonedust (Casey Leonard), showed in his Hawthorne debut that he’ll be a force on Saturday’s Night Of Champions. (Four Footed Fotos)

Going into last Friday’s first Molaro elimination, Casey didn’t know much about the 4-year-old Tim Clevenger trainee. After the race was over, the 41-year-old Leonard knew he was at the lines of an eye-catching gray pacer with a wicked late move.

“Stardust has got a big late kick,” said Casey.” I didn’t realize how fast we were going. It was deceiving to me we covered the last quarter in 25.3.”

Unraced at two and with only four starts at three, Stardust has blossomed into a very good four-year-old for owners Tom Pollack (Venetia, PA.) and Jeff Cullipher (Pendlton, IN.). Last week’s victory was the Sagebrush gelding’s 10th in 27 season starts, and boosted his 2018 purse earnings to just under $100,000.

Stonedust is the 14th foal, of the broodmare April Ruffles and her sire was Laag ($642,005), one of the all-time elite gray pacers of our time.

Unlocked paced a quick 54.4 last half, in his half-length win, over the front-stepping Fox Valley Rebel (Cameron McCown),who also established himself as a force in the Molaro championship.

The other Molaro finalists are: He Gone Jack, Dakota Jack, Fox Valley Reggie and Sporty Redhot from the first elimination and Slzburgerslzburger, Dakota Roadster and Evergreen Elite from the second.

Earlier First Post: With 13 races on Saturday and the lowest purse a pair pf $25,000 Invites, Hawthorne has moved up its first post to 7 o’clock from its always scheduled 7:10 pm start.