Homepage
You are here: Home1 / Mike Paradise2 / Getting a Handle on Matters 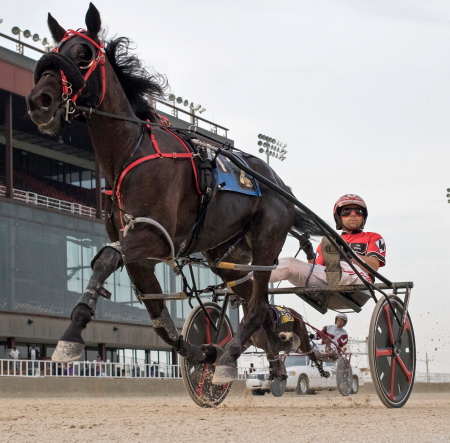 If you are a resident of the Chicagoland area you certainly have noticed a spike lately in the weather. While summer doesn’t official arrive until June 22 it has come about on the local scene weeks earlier.

And the weather isn’t the only thing has warmed up in recently in Illinois. I’m happy to report that the nightly Hawthorne mutuel handle has taken a upward surge as well.

On the recent Sunday May 30th program, the one million mark in handle was reached for the first time at the meet when $1,097,607 was wagered.

You might say that’s no big deal since most other tracks in the country don’t race on Sundays, however the next live racing card at Hawthorne also went over the one-million-dollar level as well.

Last Friday’s June 4th card saw $1,095,502 stream through the Hawthorne mutuel system. The previous Friday programs in May were in the $750,000 range, so that was a substantial jump handle-wise.

Obviously a larger than normal 14-race program helped that handle but Hawthorne’s move to a 6:30 first post, 40 minutes earlier than it had been for the first month of the meeting, no doubt hurt the horsemen’s purse account, at last weekend.

After a month of the meet with a 7:10 Sunday first post, I’m sure I wasn’t the only person in the dark concerning Sunday’s important switch to a 40 minute move up on Hawthorne’s first race starting time.

I’m still looking for the Hawthorne press release on the move to an earlier Sunday post.

Nothing at the USTA site. Ditto for the “press release” news button at www.hawthorneracecourse. There was a promo ad on the track’s website but when was it placed there?  By chance I saw that announcement last Sunday morning.

I have no problem with a 6:30 first post on Sundays. Balmoral had it and it worked out successfully for them. But fellas, let’s do a better job of informing the public when something as important as a 40 minute earlier first post is invoked.

The rise in mutuel handle coincides with the dark cloud of the Covid-19 catastrophic at long last being lifted. While normalcy isn’t quite here just yet, it’s getting closer, and many people just want to go out and enjoy themselves after being bombarded for over a year with doom and gloom narratives.

Is this the start of a summer romance of local sporting events?

Another Go Around: The $12,000 Open Pace returns tonight with past meet winners He’zzz A Wise Sky (Kyle Wilfong) and Fox Valley Gemini slugging it out for a fourth consecutive time.

Round one on May 8 went to “Gemini” however in their last two meetings He’zzz A Wise Sky has prevailed for trainer John Filomeno and owners Triple ZZZ Stable of Justice, Illinois.

Posts were drawn for groups in the eight horse sixth race feature with He’zzz A Wise Sky landing the outside eight-hole and the stat of the Terry Leonard Stable getting away one post further inside.