Homepage
You are here: Home1 / Mike Paradise2 / Hansen Hunkering Down During Crisis

Veteran horseman Gerald Hansen has seen his share of work stoppage though the years in our industry but unlike past disputes between horsemen and racetrack management that often concluded through hard fought negotiations, this current shutdown of Illinois horse racing can’t be ended by dialog.

The newest strain of the Coronavirus will have to run its course before some form of normalcy returns to our nation. Until then it has all of us nervous and unsure of its duration and its impact on human life.

We asked Hansen his thoughts on the present world-wide Pandemic and its effect on him and his horses.

“As far as this layoff and the uncertainly of just how long it’ll go on, I’m now giving my older horses every other day off. The young ones go out every day, as usual,” said Hansen from his farm in Crete, Illinois.

“I recently had lot of vet work on Bernie and Deb Paul’s two horses My Uptown Girl and Et Tu Brute. They are in top shape now but there’s no place to race them. I’m not going to Ohio while we’re not racing in Illinois. I’m hunkering down and riding this thing out.

“Like a lot of other people in the industry, this is affecting me pretty good. It’s tough and it’s probably going to get tougher. I’m just hoping this situation we’re going through lasts a couple of weeks and not a couple of months. If it does, it could put more people out of the business.” 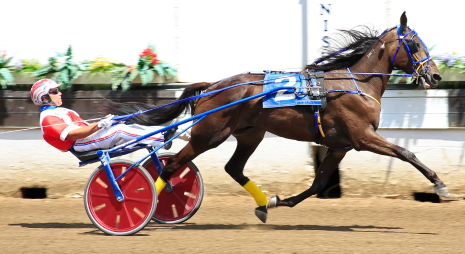 The Hansen stable’s talented ICF trotter Talk About Valor has thus far been on the sidelines at the Hawthorne meet. The now five-year-old trotter hasn’t raced since last September 12th when he was second in the Plesac stake preview, keeping his streak of all 18 consecutive starts in 2019 with a third-place finish or higher.

After going winless as a freshman and putting up modest numbers of two wins in a dozen tries with $17,294 in money won as a three-year-old, the new star of the barn blossomed at the age of four when he chalked up six victories and banked over $42,000 for his Monee, Illinois owner Shelley Steele.

Regrettably for Steele and Hansen, the Yankee Valor gelding, out of the successful late broodmare Heather Doreen, didn’t get his opportunity to go over the $50,000 plateau in earnings. He had to be scratched out of the $45,000 Plesac Final on the 2019 Night of Champions.

“Talk About Valor tore 15 per cent of a suspensory before Super Night (Hawthorne’s Night of Champions) last year,” said Hansen, twice the leading trainer (2000 and 2003) at Balmoral and also is a former titleholder at Maywood and Hawthorne.

“After we stopped with him we had it blistered three different times. I still didn’t like what I saw so we had it frozen and then blistered again. “Now he’s back to normal. He’s probably about two months away from racing. I’m giving him all the time he needs.”

“When Talk About Valor was a three-year-old he got a fracture of his cannon bone in a freak stall accident, so that put him way behind the other horses in his division,” continued Hansen. “He didn’t qualify until early August and only made about a dozen starts in 2018.

“It wasn’t until the horse raced a few times as a four year-old that he really began to come around. The horse’s improvement coincided with the death of his brother. It was like he knew “Picky” was gone. From that time on Talk About Valor just got better with every start.”