Trotters are the center of attention Sunday night with seven of the eleven races on the Hawthorne program for the diagonally gaited horses. Just as they come in all sizes and shapes so do tonight’s contests for them.

Everything from a bottom conditioned trot, to mid-level events, to an Open II showdown is on tap. In between we’ll be presented with the first legs of the Erwin Dygert stake series for ICF colt and gelding trotters and the Beulah Dygert for state-bred filly sophomores.

It’s the third race and returning from a week ago are the one-two finishers Topville Avatar (Dale Hiteman) and M T UR Pockets (Kyle Wilfong), along with Big Expense (Kyle Husted), am Open III winner at Hawthorne on May 13 and Jackie Goldstein (Jim Lackey) who needed his first start of the year last Sunday.

The new faces re Charles VII (Bob Smolin) and Pridecrest (Jared Finn), assigned the four and six posts, respectively. Both had been racing on the east coast and doing well.

Charles VII, the 9-5 Hawthorne morning line favorite, is a four-time season winner and comes out of $20,000 high-level trots at Yonkers while Pridecrest last raced in a $50,000 claimer at The Meadowlands. One of his two season victories came in two legs of the YR/SOA of New York $25,000 Bonus Series on the New York half-miler.

The Erwin F. Dygert drew a nine-horse field as will go as race six. 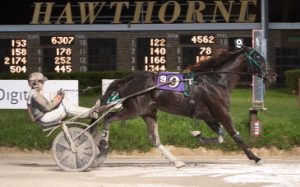 The favoritism will likely be split between the Steve Searle Stable’s Bands Houdini (Kyle Husted), winner of the recent Daryl Busse Series; Trixie’s Jethro (Jared Finn) who has a win, a second and a third, in his three season starts, all in open company from trainer John D Finn, and Totally Pazzazzed (Mike Oosting), runner-up in his last two Busse Series races for the Nick Giberson Stable.

Also likely to get plenty of play is Lousciper (Tim Curtin) out of the barn of Jamaica Patton, and last season’s Cardinal and Kadabra champion as a freshman, along with Picky Picky Valor (Brian Carpenter), a first leg winner in the Busse Series and third in the final

The gals take over the limelight in race nine when a full field of 10 fillies will go behind the starting gate for the $12,000 initial leg of the Beulah Dygert stake series.

Fox Valley Elana, winner of last season’s $75,000 Fox Valley Flan with Casey, was a solid second last week in her very first start as a 3-year-old. She’ll benefit from that outing and landing the one-slot again.

Sis’s Ellie Mae is 2 for 3 this year and did beat Fox Valley Elana last week. She likes to be in command and leaving from the two-post could find her there. 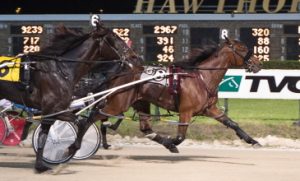 Daisy Lou Duke came out of the box ready to roll. She won her first start in almost eight months in an opening leg of the Late Closer Farber Series and was third in the final despite a strenuous trip. Note that ICF filly took on open company males in those Farber Series races.

Royale Big Guy was parked-out from the get-go and once he got alongside of the pace-setting Gabe Henry near the half-mile pole (:56.3) the Norm Parker trained gelding had to battle outside Gabe Henry through the third quarter.

Royale Big Guy ($4.00) then held off a late-charging Captain Rhett (Casey Leonard) by a half-length for the 1:53.3 win. Gabe Henry was third, less than one length behind the Pennsylvania invader owned by the Megan Rogers Racing Stable of Chicago. 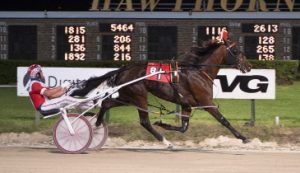 Leaving from the one-slot, the Nick Giberson trainee came out of the three-hole after the first quarter (29.3), brushed to the top before the half, reached in 58.1, and had more than enough left in the tank (26.2 last panel) to best In Your Eye by two-plus lengths. Fox Valley Herbie was third, another two lengths behind.

The win for Fox Valley Nemitz was his first in four tries as a 3-year-old for his owners and breeders Fox Valley Standardbreds of Sherman, Illinois.