To the surprise of no one the Hawthorne Race Office entry box was jammed packed and then some Wednesday morning with entries for this weekend’s restart of the local harness racing season.

With no purse money coming in for the last eleven weekends due to the destructive Covid-19 Pandemic lockdown there are only 47 nights of racing remaining at the Hawthorne meet, not a lot of time for Illinois horsemen to generate enough income in a effort to salvage their 2020 racing season.

That’s the reason an astonishing 551 horses were entered for this weekend’s races that took over 12 hours for horsemen to view an Overnight Sheet to see if their horses got in and if so, which day.

With a pair of 13-race weekend programs, a total of 259 pacers or trotters at long last will go postward for the first time in over two and a half months. Unfortunately another 292 entered horses will have to wait at least another week to try and rake-in some dough for their disappointed owners,

While the 551 entries probably exceeded expectations, you could almost see the huge numbers would be coming. 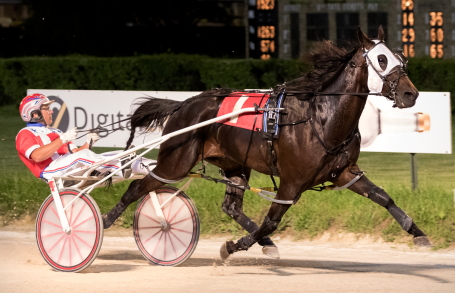 After all last Monday’s Hawthorne qualifiers had 154 entries, making it necessary to hold an extraordinary 22 qualifying races that lasted some five lengthy hours. Meanwhile Tuesday afternoon’s Springfield Preview at the State Fairgrounds saw 94 Illinois bred pacers or trotters compete in 17 different races, and that followed 17 Springfield qualifiers over last weekend.

With the vast majority of two-year-olds making their racing debuts in the next few weeks, six Late Closer series events beginning this Saturday and Sunday, and with ICF pacing and trotting stakes scheduled every weekend of June and July, you can expect the entry box to be spilling over most “double draw” days through the end of the decimated Hawthorne meet.

Nonetheless there’s a nice mixture of competitive races on Saturday’s stretched out 13 race card that has the potential of producing a good size mutuel handle.

The program is headed up by a 10-horse Open III Pace that will go as race eight with the 2019 Night of Champions two-year-old pace champion He’zzz A Wise Sky (Bobby Smolin) given the task of competing against much older and more season pacers.

The Don Filomeno trained standout was assigned the pole position, a small consolation since the youngster is asked to make his three-year-old debut after nine months off against a group of horses with lifetime marks of 1:51 and change or faster. The Open III headliner is a prep race for the ICF sophomore with only seven career starts. He’ll compete next weekend in the opening leg of the Robert Carey state-bred stake series.

The handicapped feature carries a modest $7,300 purse. That’s $800 less than the 12th race conditioned pace for mares that are non-winners of $40,000 lifetime (ICF $51,200). Also eligible for that $8,100 event are distaffers without four lifetime wins or ICF four-year-old pacing mares.

Maybe those two race purses in the future should be switched.

Saturday’s much anticipated match-up between Fox Valley Gemini and Castle Flight was a “no-go” and put on hold for at least one more week. Both horses were among the six pacers entered for the $10,500 Open I. However our top overnight event was scrubbed for a 10-horse field of $4,000 claimers.

It is a sad time in our industry when an Illinois race track substitutes quantity over quality.