Homepage
You are here: Home1 / Mike Paradise2 / He Gone Jack in Customary Role

The 5-year-old ICF pacer He Gone Jack will be cast in his familiar longshot role tonight, when he goes postward in the second and tougher of the two Open II Paces on Hawthorne’s card.

The star of the Ray Hanna staked, pulled off an upset last week in an Open II event, when he was given a very favorable second-over trip by his veteran driver Tim Curtin, popping at $36.60.

“That’s about as good a trip as you can get,” said Hanna.

He Gone Jack is having a very solid Hawthorne meeting. All six of his summer starts have been in one type of an Open Pace or another and he’s missed only one check while winning twice and being nosed out of another back on May 11th. 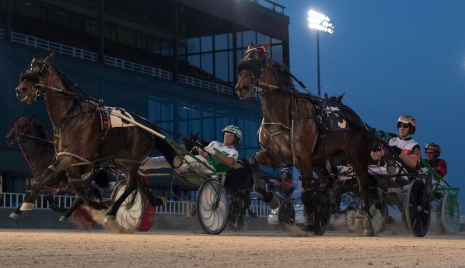 He Gone Jack (N. 3, Tim Curtin) got past Terror Of The Nite (Kyle Husted, outside) to pop at 17-1 in an Open II Pace last week, Both pacers are back in action Friday night. (Four Footed Fotos)

One week earlier, the Richess Hanover gelding, captured an Open III Pace for his owners and breeders Hugh  and Susan Lacey of Joplin, Missouri.

“He’s has good now as he has ever been . . . maybe a bit better,” added Hanna from his farm in Altamont, Illinois. “He’s not a very big horse. Since he was a 3-year-old he’s filled out bigger and he’s stouter now. He Come Jack loves to pass horses in the stretch. He can come home pretty good. If he keeps going the way he has been going, we’ll put in that big stake for older horses on the Night of Champions.”

He Gone Jack’s reward for winning last week at 17-1 odds was to draw for the two outside posts in this week’s fourth race Open II. He landed the six-slot, while the Terry Leonard Stable’s, Ponda’s Prospect, unbeaten in his three Hawthorne outings, gets his first outside post of the meet with the seven.

The classy Somestarsomewhere has spent the summer at Hoosier Park racing in either Invites or Open I or 2 events for trainer Tom Simmons. The 7-year-old pacer has a mark of 1:49.2, taken at Lexington as a 2-year-old. The winner of 25 lifetime races is closing in on $450,000 in career earnings.