Homepage
You are here: Home1 / Mike Paradise2 / Horsing Around with Stakes Names

Prior to 2016 when Hawthorne became the lone harness racing facility in the Chicago area after Balmoral and Maywood Parks went belly up, its Night of Champions events weren’t named after persons or horses that played significant roles in the state’s Standardbred industry.

Instead all the two, three-year-old and aged NOC events were designated after the pacer or trotter who won its championships the previous year.

In some cases the championship (a) honored a horse that went on to have a very successful career. Sometimes it feted a horse that (b) ended up with limited accomplishments, and on other occasions its ICF stakes series (c) flattered horses that had just a brief time to shine under the lights, usually because of future health issues. 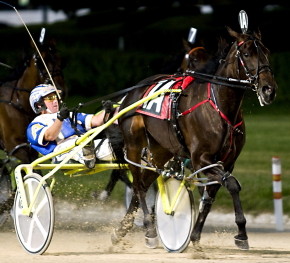 Some 13 years ago Hawthorne’s 2007 Night of Champions produced winners in all three of the above a, b and c categories. The most prolific champions career-wise were Sports Fancy, Booze Crusin and Thisbigdogwilfight,

The Homer Hochstetler trained Sports Fancy (Ryan Anderson) captured Hawthorne’s Determination Plus Final for ICF 3-year-old fillies. That same year she added the $150,000 Maywood Pace, the Cinderella, the Violet, a Balmoral Hanover and its $174,000 Grandma Ann Final on Super Night.

Sports Fancy would on to accumulate 46 first place finishes while taking a mark of 1:49.4 at the Meadowlands (2009) and chalking up over $1 million in lifetime earnings.

The Arts Conquest gelding would put $964,685 on his career card, while collecting 47 wins, and flaunting a mark of 1:49 flat, paced at Balmoral as a four-year-old.

The Jim Eaton trained Thisbigdogwilfight had his finest season ($264,638) at the age of four when he won Hawthorne’s Carey Memorial with Dave Magee. That same 2007 season the son of The Big Dog swept the Maywood Park Pacing Series (Cook County, Associates and Egyptian), along with winning four Chicago circuit Free For All events.

All told Thisbigdogwilfight visited a winner’s circle 56 times, raked in $978,789, paced a season mark of 1:49.1 twice and was the first Illinois bred pacer ever to post sub 1:50 winning miles five consecutive years, achieving that fete from 2006 through 2010. 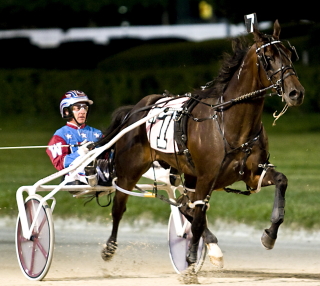 Maxter had back-to-back lucrative campaigns for trainer Roger Welch. The winner of Hawthorne 2007 NOC Plesac Final made over $153,205 as a two-year-old.

The Valley Victor gelding was the 2008 Illinois Trotter of the Year when he delivered over $230,000 in season revenues, proved best in 13 starts with 10 straight that included sweeps of the Cardinal, Hawthorne’s Thundercrack series, Springfield and Balmoral’s Su Mac Lad, while taking a mark of 1:55.1 in an state-bred 3-year-old stake that early August at Balmoral.

However, during the next for years Maxter raced only 36 times, went winless, and added only $30,210 more to his lifetime earnings.

She’s So Hot’s victory in the 2007 Broadway Tax championship with Dave Magee was one of her six consecutive victories as a freshman for trainer Rick Schrock. The Richess Hanover filly also annexed the Springfield and Violet titles while taking in over $157,000. 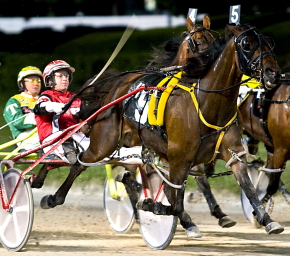 Thisbigdogwilfight (Dave Magee) fought his way to a NOC title in 2007 and went on to have a long and sparkling racing career. (Four Footed Fotos)

She’s So Hot made $75,986 as a three-year-old with much of that amount earned in the Maywood’s $100,000 Filly Pace in mid-June, one of her only two victories that year. The stake’s elimination was the other, at. The filly would never win another pari-mutuel race, losing her next 11 starts in 2008 and going 0-for-8 at the age of four before health issues ended her racing career.

Mogo On The Gogogogo followed her lucrative juvenile season of $94.676 in purse earnings for trainer John Butenschoen by coming away with Hawthorne’s Fox Valley Evita three-year-old filly trot title on the NOC . . . and never competed again.

Bob Phillips’ Lil Bit Tuff only had four starts as a two-year-old however the filly pacer pulled off an upset with Dave Magee in Hawthorne’s2007 Star Slinger championship. Over the next two seasons the Vaporize mare would manage only 15 more trips to the gate, and none was another triumph.

Roger Welch’s Thundercrack (Sam Widger) held off the field in Hawthorne’s 2007 Gumcorner Lad championship. On the other hand the Valley Victor gelding would have success in just three more races and made only 14more trips postward in a short career that ended the following year.

As you can see, fame can indeed be fleeting.

Additional information is available at Hawthorneracecourse.com.

Dept. Of Agriculture Stakes Due April 15 A Chat with Trainer Nelson Willis
Scroll to top