Through my 47 years covering harness racing in Illinois I’ve been asked many times about my favorite ICF pacer or trotter. I usually have replied that my preference was to make those choices at each Chicago circuit race track and from different eras.

In my first 18 years as the Director of Publicity when Sportsman’s Park was a five-eighths oval, I got to watch and write about such celebrated ICF horses as Incredible Finale, Gosox, Iggy Magoo, Taurus Bomber and Desperate Lady, just to mention a few.

Nevertheless the one Illinois bred from that time period who sticks out the most in my mind was Hothead, a publicist’s dream horse. 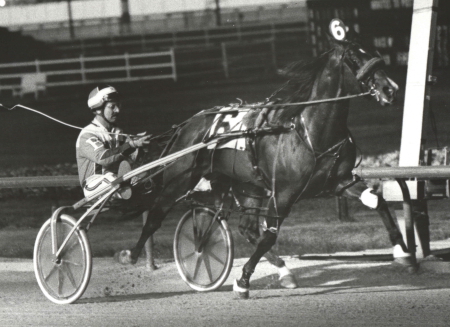 Hothead (Mike Borys) is shown here winning one of his victories at Sportsman’s Park when he was honored as the 1985 Illinois Harness Horse of the Year. (Pete Luongo Photo)

No he wasn’t the fastest horse that I saw race at Sportsman’s and he didn’t make the most money but his domination of the state-bred stakes as a 3-year-old and his gameness and tenacity that followed in his aged pacing years against the very best open company horses in the country, went a long way to draw attention to the then overlooked Illinois bred Standardbred program.

Hothead, a homebred colt of Centaur Stable (George Barounes) of Evergreen Park, was a son of Duncan Price’s stallion BS Skipper, Out of the Worthy Boy mare Two Step.

The stud pacer started off his marvelous career by capturing 31 of his first 35 races and going an amazing 29-for-33 as a three-year-old, including a sweep of Sportsman Park’s 1985 “Triple Crown” Illinois bred stakes—The Bye Bye Byrd, the Cardinal and the Langley for his late driver-trainer Mike Borys.

From 1985 through 1988 Hothead won 52 of 121 starts, a lofty 43 per cent winning percentage, and the ICF star of those seasons also raced at the Meadowlands against the very best pacers in the country. At The Big M Hothead took a new lifetime mark of 1:53 flat in 1987 and followed with his career fastest time of 1:52.2 a year later in New Jersey. He raced a busy 74 times at the age of 5 and 6 and collected over $400,000 in those two campaigns often taking on the nation’s elite pacers.

Hothead ended his brilliant racing career with a bankroll of $904,333, at that time second only to Incredible Final for an ICF pacer.

Ironically Hothead’s most memorable race may have come in defeat. It was his classic battle with driver Lavern Hostetler at Sportsman’s Park against the No. 1 pacer in the country Forrest Skipper in the 1986 U.S. Pacing Championship. 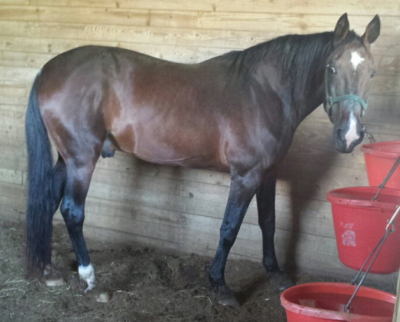 Thus author interviewed Hostetler about the unforgettable confrontation a few years ago and he recalled the Hothead vs Forrest Skipper face-off like it was yesterday:

One week later, the 1985 Illinois Horse of the Year, and Hostetler came back with a vengeance and zipped past in deep stretch to knock off the millionaire Chairmanoftheboard (John Campbell) in the $71,200 American National Aged Pace, thanks to some quick-thinking from

Remember in those days there was a hub rail at Sportsman’s Park and no “passing lane.”

“After the race Campbell told me: ‘Okay son, you out-smarted me that time but you’ll never do it again.’ Since then every time I ran into Campbell he always brings up the Chairmanoftheboard race.”

A video of the classic Sportsman’s Park race between Hothead and Forest Skipper is available via the old Chicago Harness Racing Show, co-produced and co-hosted by Eleanor Flavin and a much younger yours truly, from You Tube at:

If you’re bored while live racing at Hawthorne is not available at this time why not get some action by playing the horses through the Hawthorne Club app. It’s the only current source of income for purse generation during this Covin 19 shutdown.