Homepage
You are here: Home1 / Mike Paradise2 / How the NOC Freshmen Series Stands

We reached the half-way point last weekend in the race for a starting berth in the Night of Champions 2-year-old stake series. There’s still two more legs to go to reach a final Hawthorne’s show case evening of racing on Saturday, September22, so a lot of things can change in the next eight-plus weeks before the freshmen showdowns.

Let’s take a look on how at the point standings for the four juvenile stake divisions after two series legs. A series win is worth 50 points, then its 25 for a second, 12 for a third, 8 for a fourth, 5 for a fifth and one for starting. The championship fields are limited to the top ten point earners in each stake division. 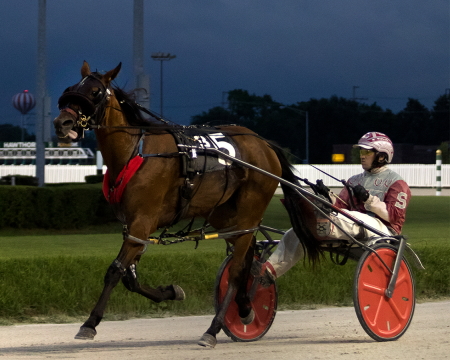 Brienne The Beauty (Travis Seekman), from the barn of trainer Clark Fairley, moved into a second place tie in the Incredible Tillie point standings with a victory last weekend. (Four Footed Fotos)

Second round victories by Perch and Brienne The Beauty boosted each filly to into a tie third and fourth place in the Incredible Tillie standings with 50 points each. Both youngsters weren’t ready to make their pari-mutuel debut in the June 30 first legs won by Yankee Joanie and Fox Valley Halsey,

The point totals in the 2-year-old Incredible Finale colt and gelding series shows five ICF youngsters within 12 points of each other for the top spot.

The Bucket’s victory last Saturday boosted the Ken Rucker trainee to 62 points, the same as first leg winner Meyer On Fire. Meanwhile The Bucket’s stable-mate Maximus shot up to fourth place with his second round victory.

Here a look at the Incredible Finale standings after two rounds: The Bucket and Meyer On Fire with 62 points, followed by Frontier Muffler (58) Maximus (55), Viola (50), Coming Up and Ryan Racketeer (26) and then a long jam with 13 points each for Cooter Luke, Holden Steady, Riley The Mooss and Fox Valley Julius.
The Nelson Willis Stable’s Fox Valley Pisaco has distanced himself from the others in the Kadabra series for freshman ICF trotting colts and geldings when he followed his earlier first leg victory with another Sunday.

Fox Valley Pisaco is on top of the Kadabra standings with a perfect score of 100 points. First leg champion Trixie Turbo made a costly break Sunday but managed to come from 22 lengths behind to be third and is second with 62 points.

With back-to-back Fox Valley Flans series triumphs E L Game On from the barn of Mike Rogers sits atop the 2-year-old filly trotting division with her flawless 100 point score. 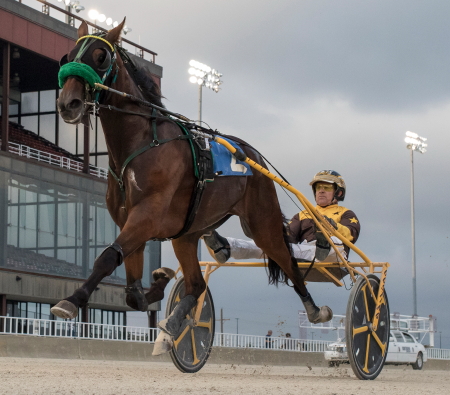 Encantado and Louzotic are in great shape with 75 points each after they have traded series victories and second place finishes with each other. Heidi High is all alone in fourth with 37 points, then its Notanangel (26), Lousslataire (24), Lous Scion Lou (17), Skippmalou (16) and Puddin Cheeks and Joe Joes Violet both withe 9.

Sophomores Take Over: It’s round three this weekend for ICF sophomore pacers and trotters on their march to the Night of Champions. The Robert F. Carey division for freshman pacing colts and geldings will go on Friday evening.

On Saturday the gals will fight it out in likely two pacing divisions of the Plum Peachy and Sunday the second season trotters take over the spotlight with matchups in the Beulah Dygert for fillies and Erwin F. Dygert for their Illinois bred male counterparts.

With The Springfield and Du Quin State Fair meets the Illinois Standardbred industry’s center of attention during the month of August, the third leg of the freshman Night of Champion series won’t take place at Hawthorne until September 7th and 8th.