The 28-year-old Husted was one of three drivers who were sent tumbling down on the racetrack when a spill occurred last Friday night. The other two unseated drivers Casey Leonard and Tyler Shehan suffered bumps and bruises but were back driving the next evening.

However, Husted is still sidelined but says “I’m feeling better every day.”

“I landed on my left knee when I went down and it’s the same knee I had reconstructed surgery on over the winter. It’s still pretty sore. The hospital people told me to see a specialist to determine if it’s just banged up or if another surgery is needed. I plan on see one Monday. Hopefully it’s just a sprain and I’ll be back driving soon.” 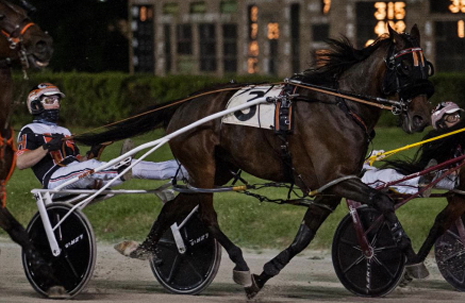 Fox Valley Exploit will be back in action Saturday night when she tries to stay unbeaten as a three-year-old in a $15,000 division of the Plum Peachy stake. Her regular driver(and trainer) Kyle Husted has been sidelined and Casey Leonard be at the lines of the filly tonight. (Four Footed Fotos)

Meanwhile Husted’s talented sophomore filly is in the capable hands tonight of the meet’s leading driver Casey Leonard, a spot the Harvard Illinois horseman has secured at Hawthorne the last four seasons.

While Husted’s fitness currently is not where he would like it to be his filly Fox Valley Exploit has been healthy and hearty, going three-for-three at the meet with a trio of state-bred stake triumphs.

No Peachy Surprises: Thus far at the meet the first two rounds of the Plum Peachy have gone as anticipated.

Last season’s ICF Filly Pacer of the Year Fox Valley Exploit was anticipated to be a strong candidate to her march to the Night of Champions and she’s been just that for the Kyle Husted stable and in some observers eyes, even better than excepted.

The Sportsmaster filly has been perfect, a confident winner in the Violet pace and both rounds of the Plum Peachy. Fox Valley Exploit has hauled in over $35,000 in her first trio of outings for Husted, who shares ownership of the filly with Michigander Dave Bringham. “Exploit” was sent off at overwhelming 1 to 9 odds in the June 27th Plum Peachy and returned a meager $2.10 mutuel.

The filly’s rivals Sleazy Gal and Sign Her Up had solid freshman campaigns and were projected to be Fox Valley Exploit’s strongest challengers in 2020 and they are living up to that billing.

Amazon Princess with 25 points and Style And Spirit with 20 currently occupy the fourth and fifth spots, respectively and a purse check finish tonight would solidify one, or both, to a starting berth on the Night of Champions. You’ll need a crystal ball to determine the possible remaining Plum Peachy finalists.

Top Three Square Off: Saturday’s first $15,000 Plum Peachy will see the three leading point earners in the standings square-off in the sixth race. They’ll leave from the three middle posts in the seven-horse field with Sleazy Gal (Kyle Wilfong) getting the three, Sign Her Up (Juan Franco) the four, and Fox Valley Exploit (Casey Leonard) starting from the five.

While the eighth race second Plum Peachy doesn’t have the charisma of the first, there’s another $15,000 pot on the line and a chance for some fillies to make a lot of hay, and I don’t mean the kind they eat.

With 50 points going to the division’s first place finisher, 25 to the runner-up and an even dozen for the third horse, and so on, there is an opportunity for some gals to zoom up the point standings and maybe secure a starting berth in the Night of Champions final.

Carey Results: He’zzz A Wise Sky $2.10) had no trouble winning last night’s first $15,000 Robert F. Carey stake series with a 1:53latc locking. Driver Bobby Smolin had the heavy favorite in fifth and last through the 57.2 first half and when asked for another gear, the Don Filomeno went from last to first in a quarter of a mile and was hand driven to the finish wire.

Western Perch (Kyle Wilfong) was second best, ending up one and one-half lengths behind the winner. Illini Force took third.

When the pre-stake favorite Fox Valley Ren was scratched due to sickness, the second Carey split suddenly became a wide-open affair. The Kimberly Roth trained Bagman ($10.40) came off the pace with driver Todd Warren and won the $15,000 event in 1:54.2, two full lengths ahead of runner-up Ryans Ambassador (Jim Molitor). The favorite RG’s Tracer was third, almost another two lengths behind.