The first leg of the Plum Peachy stake series for 3-year-old ICF pacing fillies is the focus point of Friday’s 12-race card at Hawthorne. A pair of $12,500 divisions will be contested in the first step to secure a starting berth in the Night of Champions Final on September 10.

The sixth race first division could see Hosea Williams Lexington Lady go off as a heavy favorite. I’ve got her at 9-5 in my line. The Lexington Legend filly earned over $75,000 for her Chicago owner and trainer as a 2-year-old winning 9 of 14 starts to go along with 4 seconds. 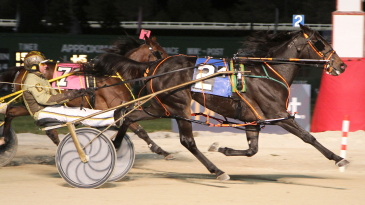 Landing the one-slot tonight after her first two season starts came from outside posts in open company events should boon well for Lexington Lady (pictured) who had the misfortune to draw the 10-hole on Super Night when she ended up the bridesmaid in the  $155,000 Filly Orange and Blue.

The second $12,500 split looks to be very intriguing. Quad Racing of Chicago’s Char N Marg (Casey Leonard) will open as the 2-1 favorite after a banner first season campaign when she raked-in over $126,000 for the Quaid brothers—Patrick, Brian and Daniel—highlighted by the filly’s O&B Filly Super Night championship.

A daughter of Sportsmaster, the filly was a $5,000 yearling bargain price at the 2014 Walker Sale. Char N Mark also annexed Maywood’s Violet Final.

She has some stiff challengers Friday night, including Mini Me freshman champion Likeafireaballshot (4-1, Jared Finn) and Ron Knupp’s Whiskersonkittens (3-1, Todd Warren) who wasn’t staked as a 2-year-old.

The Kim Roth trained filly has shown she deserves a shot this year against the best in her division after a sweep of a winter Late Closer Series at Hawthorne. This will be the filly’s first race since early February.

New to the local scene is the Ron Burke Stable’s Art Angel Baby who spent her first three sophomore starts racing at Mohawk against open company distaffers. The Florida owned daughter of Sagebrush certainly knows how to find a winner’s circle. She visited it 8 of 9 starts in 2015.

Seven of those triumphs came on the Illinois Fair Circuit when she was owned by Bridgette Williams and Freedom Hill Farms, her breeder. The filly was sold in early August and sent to Tioga Downs in Nichols, New York, which borders northern Pennsylvania, where she breezed in 1:55.2 for her new connections.

A Stunning Opener: It didn’t take long in the opening rounds of the 3-year-old ICF trotting stake series to have a surprise winner. It came in Thursday’s opener when Roma Falls, nicely handled by driver Matt Krueger, popped at a $51.80 mutuel for trainer Ray Hanna.

The even-money favorite Powerful Princess (Casey Leonard) broke on the move just as she got her head in front of the Roma Falls on the backside and ended up a non-threatening fourth. Meanwhile Krueger was content to let Vengeful (Todd Warren) take over the lead but it took a quick 27.3 second quarter for the 8-5 second choice to do it.

In the lane Kruger pulled Roma Falls out of the pocket and his filly zoomed past for a 1:58.3 winning mile in the first division of the Beulah Dygert stake for sophomore fillies.

The third race second division saw the 4-5 favorite Rocknprincessabbie (Todd Warren) battled Surviver DI (Steve Searle) through the second half of the 1:59 mile and proved best by three-quarters of a length for trainer Nelson Willis.

Ryleigh Marie made a strong move in the lane and appeared to be getting to the leaders in the late going but went off-stride and ended up last.

In the first division of the Ervin S. Dygert Memorial stake series for ICF sophomore colt trotters the 6-5 favorite Mr. Strata (Casey Leonard) was all out to gain a nose decision over Wrightwood (Todd Warren).

Another Nelson Willis trainee, Mr. Strata is now 3 for 4 in his second season and his 50 points for winning his opening leg of the stake puts him in good early position to gain the championship on Hawthorne’s Night of Champions Night on September 10.