With the first day of harness racing at the Springfield State Fair less than a week away a number of ICF 2-year-old pacers are prepping for next Friday’s stake eliminations by racing tonight at Hawthorne.

Meanwhile a bevy of other state-bred freshman pacers and 2-year-old Illinois bred trotters stayed sharp by competing in the Illinois Stallion Stakes on the Charleston, Illinois Fair Track Wednesday evening. Four freshman stake divisions were contested with each split into divisions and many were won by familiar names to followers of the Chicago Circuit.

The Steve Searle Stable had two of its youngster’s breeze to victories. Fox Valley Flan leg champion Trotting Grace (Kyle Husted) was over 8 lengths the best in a trotting division of his 2-year-old Illinois Stallion Stake in 2:02.2 on the half-mile fair track. Later in the evening stable-mate The New Americana (Steve Searle) drew off by a half-dozen lengths in his freshman colt pace stake division in 2:00, the fastest mile of the night.

Trainer Tom Simmons sent out both division winners of the 2-year-old colt and gelding stake. Tripoli Stable’s Mykonos won for the third time in a row (2:00.4) while Nancy and Donald Musillami’s Bootleg Island took the second split in 2:01.1. Mike Rogers drove both of Simmons winners.

The second filly pace division went to the Freddie Patton Jr. trained and driven juvenile Fox Valley Zola (2:00.4) who is now 8 for 9 on the Illinois County Fair Circuit. 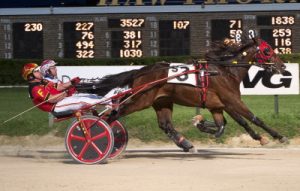 Fox Valley Winnie (Kyle Wilfong) cruised to a 4 and 1/2 length triumph in the second split of the filly trot for trainer Curt Grummel.

You can expect to see most, if not all, the Illinois Stallion Stake champions to compete in various races at the Springfield State Fair.

Friday night’s fifth race at Hawthorne is for ICF 2-year-old fillies and several of the starters are likely Springfield bound as well.

Lex Two (pp 4, Juan Franco), from the Nelson Willis barn, comes into Friday’s race fresh off a late-charging victory in an Incredible Tille division two weeks ago, while Gary Rath’s Shelby Rae (pp 5) has been first or second in 4 of her first 6 career starts.

Friday’s first race opener for 2-year-old male pacers brought out Dane May’s Lambo (Casey Leonard), winner of his $12,000 division of the Incredible Finale a couple of weeks ago in 1:55.2. It came in his third career start. Lambo’s first was a third-place finish in the Cardinal on July 1.

Attention Horsemen: Entries will be taken at the Hawthorne Race Office this upcoming Tuesday at 10 o’clock in the morning for the first two days of racing at Springfield (Friday, Aug. 11 and Saturday, Aug. 12). Horseman can call at (708)780-3690 to enter or can enter online.

The two-year-old stake eliminations will go on opening day and if a division isn’t split, a prep race will be written for it. A horse must race in the prep to compete in a championship. A $200 entry fee is required on all 2 and 3-year-old Springfield ICF stakes.

Training Triple: The Nelson Willis Stable sent out three winners on last night’s 10-race program at Hawthorne, posting victories with Parklane Official in the first, Talents Marvel in the sixth and Extravagant Art in the tenth.

Either Way Will Do: Driver Travis Seekman changed tactics with the often late-rushing Let’s Drink On It and the 4-5 favorite responded with a comfortable one-length victory in the $13,500 Open Pace. The pocket horse Coal Hanover was second in the 1:52 flat mile.