Last Friday we took a look at some of the ICF two-year-old pacers nominated this year to either or both the Cardinal and Violet events and later the Springfield and Du Quoin State Fair stake races.

This time around we’ll focus on the state-bred two-year-old trotting colony whose owners have aspirations of winning one of the Illinois Department of Agriculture’s summer major stake events.

The ICF freshman trotter most likely to get the most amount of scrutiny is Fistfullofdollars, a Lous Legacy colt out of Lima Sunlight. Fistfullofdollars was the 2019 Illini Classic sales topper at a more than expected price of $52,000. The youngster is being prepared for his first season of racing by the veteran Springfield based trainer Mike Brink.

Fistfullofdollars is the full brother of Encantado (1:54.2), the Jim Eaton trainee who captured the 2018 Springfield and Violet filly crowns, along with a leg of that year’s Fox Valley Flan. Fistfullofdollars is owned for the Illinois quartet of Mark Brown (Chatham), Darin Tournear (Liberty), Jeffrey Clauson (Macomb) and Brink (Springfield).

Interestingly, the well-regarded youngster sold as a yearling by Flacco Family Farms under the name Lous Obsession. The colt’s moniker change to Fistfullofdollars by his new owners does seem fitting, doesn’t it?

Brink will also unveil the $19,000 buy Salute The Hero, another juvenile son of Lous Legacy co-owned by Brink and All-Wright Racing of Morton, Illinois. Salute The Hero’s broodmare Whatsmata Hanover was sired by the former champion trotter Muscles Yankee ($1.4 million) 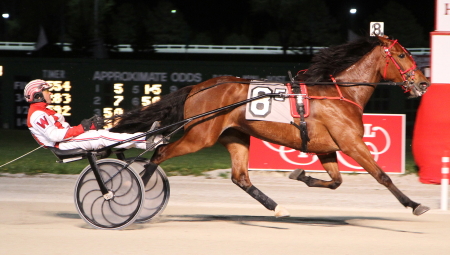 Another Lous Legacy colt ICF stakes bound is the youngster Cool Luke from the barn of Dane May. You might remember his productive broodmare Sara The Spy (1:54), a multiple ICF stakes champion in the middle of this decade. Cool Lou is her first foal.

Other Lous Legacy daughters include Myonly Sin, a $20,000 yearling acquisition and the sister of Loussolataire, a mare who trotted in 1:55.2 in a last season loss, and there’s Ting Ting, a daughter of Liebchen, a Yankee Glide mare who sold for $30,000 last year.

Conditioner Mike Brink snared the Cassis filly Flirtin With Fame for his long-time Illinois owner Bill Wright for a price of $21,000. Mississippi native Charles Arthur was the high bidder at $16,000 on Bal-Linda, a New Balance filly. The Yankee Valor gal Lucky Valerie was a $15,000 purchase for the barn of trainer Gerald Hansen.

You can expect to see most, if not all, of these young trotters compete in summer stake events ahead.