Homepage
You are here: Home1 / Mike Paradise2 / ICF Two-Year-Olds in Their “Dash for Cash”

Labor Day is already behind us and in another three weeks the 2017 harness racing meeting at Hawthorne will come to a much-too-soon end.

There are only an even dozen racing programs racing left on the Chicago circuit before the industry shuts down, until sometime in early January, if the Illinois Racing Board gives its blessing for Hawthorne’s request to have a 2017 winter harness meet.

Hawthorne’s thoroughbreds are expected to begin racing in the first week of March, therefore, a winter harness meet would most likely be of the short-term variety, maybe six weeks or so.

We’ll know for sure, if and when, a winter harness meet starts up in January, when the I.R.B. meets at 10 am on Tuesday, September 26th for its Date Hearing at the James R. Thompson Center in downtown Chicago.

What we do know, is that the ICF 2-year-olds, both pacers and trotters are in their “Dash for Cash.” For many youngsters it already started at last week’s Du Quoin State Fair meet. For some it’ll begin with this weekend’s quartet of freshman stake series at Hawthorne.

Round three of the Incredible Tillie for ICF 2-year-old pacing fillies and the Fox Valley Flan for filly trotters, will head-up Friday’s card. On Saturday, it’s the third leg of the Incredible Finale for juvenile colt and gelding pacers and the Kadabra for first season male trotters.

Round four of Hawthorne’s freshman stake series is next weekend. The Night of Champions with its lucrative finals, along with $20,000 stake consolations, is a week later, on Saturday, September 23rd.

That means those 2-year-olds who competed at Du Quoin will be asked to go full throttle four times in 25 days. 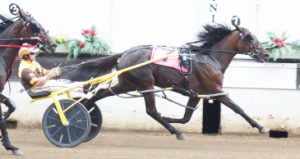 Division leaders, like the 2-year-old colt pacer Fox Valley Gemini from the Terry Leonard Stable and the freshman filly The New Americana, from the Steve Searle Stable were held out of the Du Quoin stakes, so they’ll make three trips postward in 18 or 19 days after receiving two-plus weeks off going into this weekend’s ICF stake series.

With only the top 10 points earners in each division advancing to the Night of Champion finals, for some late-bloomers or those who didn’t make their career first start as soon as others, a high finish in this week’s third round of the stake series would be essential if they are to move along to the championships.

The draw is out for the gals for Friday and both the trot and pace stakes were split into two divisions.

The first Fox Valley Flan for freshman trotters will go as race one, with a seven-horse field that consist of Fox Valley Unleash, Powerful Temtrist, Frontier Jackie, Trotting Grace, Lous Silver Star, Undeniable Emotion and Good Design, in that order.

The fifth race, second Tillie grouping, is the tougher of the two with the three leading fillies in the division: Rollin Coal (pp 1), The New Americana (pp 7) and Fox Valley Jazzy (pp 8), aiming for the winner’s share of its $16,000 purse.