Jim Ballinger’s Fox Valley Gemini, the unbeaten ICF freshman who went on to be named the 2017 Illinois Harness Horse of the Year, makes his 3-year-old debut Saturday night at Hawthorne.

While the star of the Terry Leonard Stable hasn’t been postward since his Night of Champions victory in the $195,000 Incredible Finale Final last September, Fox Valley Gemini showed more than enough in his May 13 qualifier at Hawthorne that he’s ready to begin his sophomore campaign and extend his nine race undefeated winning streak.

The son of Skyscraper out of the Cole Muffler broodmare Epona easily won his Hawthorne qualifier in 1:53.3 with regular drive Casey Leonard, pacing rather effortlessly the last quarter in 27.3. 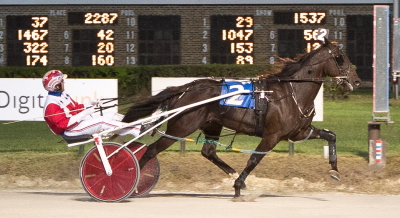 Fox Valley Gemini leaves from the pole position in an $8,000 ICF prep with Backstreet Lawyer on his right. The Tom Simmons trained does have the benefit of a start a week ago, breezing in 1:54.2. Molina, Fox Valley Hijinx, Dandy Dude and He’s A Real Shooter are the other challengers.

There’s also an $8,000 prep race for 3-year-old state-bred fillies on the Saturday card that is made up of a strong quartet from last season’s freshman distaff crop including the 2018 debut of Fox Valley Jazzy (Ridge Warren), winner of Hawthorne’s $175,000 Incredible Tillie.

Rollin Coal, Allbeastnobeauty, and The New Americana, the two, three and fourth place finishers on the Night of Champions finale will take on the Dale Kanitz trained Fox Valley Jazz, an eight-time winner in her first season.

Also going to the gate in the fourth race filly pace is Party Belle, JB’s Shooting Star and Sheincrediblenasty.

A sizzling 26.2 last panel saw Pretty Image eke out a neck decision over Narcian Jewel in the initial Open distaff pace of the meeting. 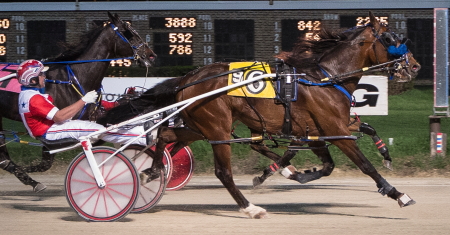 Still to be decided are the finalists for next weekend’s Bob Larry Late Closer Series Final. First leg victors Sagebrush Shocker and Beach Shooting Star have locked up a starting berth in the final with their first round wins and they’ll meet in the third race Bob Larry split against Sheriff Coffey, Rocknroll High, Skyway Fireball and You’remyhearthrong.

The second leg of the Mike Paradise Series will go as a single division this time unlike last week’s first leg. The sixth race does have 11 starters including first round winners Sports Analyst (pp 2, Jamaica Patton) and Special Sauce (pp 6, Ryan Anderson).

Both of the first leg Paradise winners will advance to next Saturday’s showdown. Hoping to join them are Herecomesmagotta, Sagebrush Sharp, Piscotty, U Makin Me Wait, Ricky The Flash, Dandy’s Phoenix, Fox Valley Brutus, Fox Valley Sinful and Fox Valley Jala who starts tonight in the second tier.

Coming Out Ready: A three month layoff didn’t make a bit of difference to the Terry Leonard Stable’s Trashytonguetalker’s in Friday night’s $10,000 Open Handicap pace feature, The 6-year-old gelding sped to a 1:51.3 clocking for driver Casey Leonard as the 7-5 public’s choice.

The 10-1 longshot Gabe Henry (Ridge Warren) shook loose in the lane just in time to nip He Gone Jack by a nose in the $7,200 Open III Pace with a 1:52.2 clocking. Trained by Tom Graham Jr, the 4-year-old ICF homebred uncorked a blistering 26.1 final panel for his Salem, Illinois owner Carol Graham.

In second round action of Friday’s Late Closer events, Ryan’s Mistress ($6.40) made it two-for-two in the Dave Magee Series, again nicely handled by driver Juan Franco. The 1:57 flat mile was a career fastest for the ICF 3-year-old filly trained by Roshun Trigg.

A few races later Totally Pazzazzed ($11.60) from the barn of Rodney Freese pulled off a mild surprise at 4-1 odds in round two of the Bea Farber trot for driver Tim Curtin with a 1:57.3 mile in front-stepping fashion.

The 4-year-old gelding too command t the first quarter pole and then had to hold off a game effort by the first over Broadway Mojo (Isaac Love) as the Trenton Watson trained trotter battled the 3-5 winner the length of the stretch.

In the tenth race Walter Paisley series the 14-1 longshot Princess Oshie made up 10 lengths in the last quarter of the mile and popped at $30.60 with her trainer Richard S Finn at her lines.

The 1:54.4 mile was a career fastest for the 5-year-old mare owned by Walk On Water Racing. November Rain was second, beaten 1 and 1 /2 lengths. The 6-5 favorite Fox Valley Catwalk went off stride and ended up distance.