Live racing at Hawthorne resumes on Saturday, June 6th and Sunday June 7th. Horses that raced at Hawthorne between Friday, March 6 and Sunday, March 15, need not qualify. They can but it’s not mandatory.

Hawthorne Qualifiers are scheduled for Monday, June 1st at Hawthorne and also on Wednesday, June 3rd. Monday’s qualifier entries must be declared by 9 am Sunday, May 31st. Wednesdays entries are due Tuesday, June 2nd, also by 9 a.m. Online entries are encouraged.

Few, if any, long-time followers of Illinois harness racing would dispute that Plesac was the No. 1 ICF trotter to compete in this century.

The John Butcheshoen trained star ended his six year racing career in 2003 with over $2.5 million in purse earnings and 36 wins in 87 career starts, often against the best trotters in the country for Richard Balog of St. Charles, Illinois.

Those are mind-blowing numbers for any trotter, not just an Illinois bred. While the son of Armbro Charger, out of Balog’s Speed Bowl mare Astute Yankee, trotted his way to stardom, Plesac wasn’t the state-bred trotter to become a millionaire in the early 2000’s and also warrant national recognition.

The Joe Anderson Stable’s Million Dollar Bye was the other.

Plesac was a 1997 foal, Million Dollar Bye, also sired by Armbro Charger, was foaled one year earlier. Both were bred by Fox Valley Standardbreds of Sherman, Illinois. 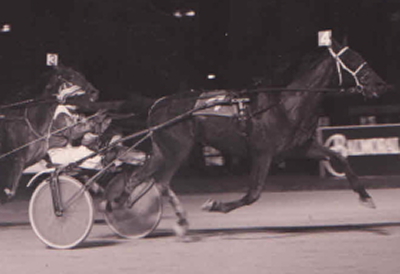 Million Dollar Bye became an Illinois bred trotting millionaire for the Joe Anderson Stable in the first decade of this century. (REB Photo)

In a lengthy racing career Million Dollar Bye hauled in $1.27 million dollars in purse earnings. He made winner’s circle stops a remarkable 66 times. The Anderson trainee competed against such top-notch aged trotters as Magician, Plesac, Fool’s Goal, Goodtimes, and Spitfire Ranger in out-of-state added money events, Invites and Opens. The Illinois-bred luminary took a mark of 1:53.3 at Lexington as a four-year-old and the horse went to the gate for twelve long years, his last in 2009 at the age of 13.

Those are indeed exceptional figures.

Million Dollar Bye was a $33,000 yearling purchase at the Walker Standardbred Sale in 1997 by the Anderson Racing Stable, John Leahy of Naperville Illinois and Tom Lewandowski of Portage, Indiana when he sold under the name Fox Valley Ice.

The new owners decided to rename the colt Million Dollar Bye. If my memory is correct, the name change was to draw attention on how the State of Illinois $1 million dollar bonus was being awarded.

At that time an ICF two or three-year-old horse had to win 3 of 4 designated state-bred stakes to receive all, or a share, of the $1 million incentive award. No small task but it was made easier when the Race Office decided in some instances to just let the highest earning horse or horses draw a bye into a championship rather than compete in short-field eliminations and earn their way into the final.

As it turned out in 1999 Million Dollar Bye did share in the Illinois Department of Agriculture’s $1 million incentive award and he didn’t need any help “byeing” his way for a shot at the big bucks. The gifted gelding swept at Springfield, swept at Du Quoin, crushed his Su Mac Lad elimination foes with a 10 length romp and then cruise by six lengths in the $107,900 championship as well.

Those designated stake triumphs were part of an eight race winning streak for the talented trotter who went on to finish second in both the $100,000 Galt at Maywood Park and the $168,488 Matron final at Dover Downs in Delaware. Million Dollar Bye would win 11 races that year and deliver a bountiful $408,914 payoff to his happy owners.

Million Dollar Bye had five seasons where he earned six figures and might have had more if health issues didn’t limit him to only seven starts in 2002 and just five in 2004.

As a five-year-old in 2000 Million Dollar Bye started off the season on the east coast at the Meadowlands in Free for All and Invitational events and then was shipped all the way to California to Los Alamitos for the Staley stake series where he captured its $137,250 final with “Little Joe” at his lines. Later in the year he won Opens at the Red Mile in Kentucky and at The Big M in New Jersey.

The gelding raced the first two months of 2001 at the Meadowlands taking on their best trotters. He competed in that year’s prestigious Classic Series at Dover in Delaware, Woodbine in Canada and back at the Meadowlands. He took on the best in Illinois for most of his last 18 season starts with stops in Indiana and Kentucky Open trots.

More high-level races at the Meadowlands were the norm in the mid-2000s for Million Dollar Bye who gave it one more gallant, but unsuccessful, try in 2009 at the age of 13 before his well-deserved retirement began.

Hawthorne’s Late Closers Pushed Back The Wait is Over. Live Racing Returns
Scroll to top