Illinois harness racing picks up where it left off at the Hawthorne meet with programs on two afternoons a week for the next three weeks on Springfield’s state fairgrounds.

They’re non wagering events sponsored at Hawthorne and the first card, a 13-race program, gets under way at noon today.

The headliners are the fifth race Open trot and the ninth race, a division of the Autumn Allowance for horses that last raced at Hawthorne. It’s not called an “Open,” but it very well could be because three of the six horses going postward last raced in a Hawthorne Open and another (Millenial, Gabe Wand) did early on last month.

While the card is non-wagering I went ahead and did a line with some comments to add some spice to the $8,000 event, and the other 12 races. That line can be found elsewhere on this harnessillinois.com site. 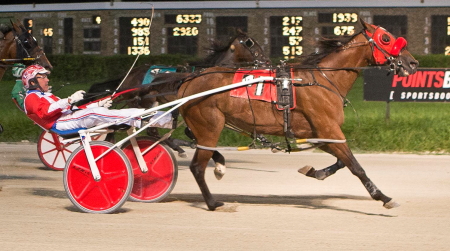 Primo Giovanni (pp 3, Casey Leonard), Hidden Assassin (Rick Schrock) and Rock N Republic (Cordarius Stewart) each were “regulars” in Hawthorne Opens all summer long and the first two horses mentioned both have an Open victory on their season list of accomplishments.

Primo Giovanni was a fast closing (26.2) third last week for Northbrook, Illinois owner Marty Engel, beaten less than one length, while Hidden Assassin’s fifth place finish was the only time this year in 12 outings the four-year-old didn’t hit the board.

I labeled Primo Giovanni the Terry Leonard stable’s “other Open horse.” The nine-year-old has raced in the shadow of his illustrious stable-mate illustrious Fox Valley Gemini, a three-time Illinois Harness Horse of the Year and last weekend’s $62,000 Robert S. Molero Memorial winner to keep the horse a perfect six-for-six on Hawthorne’s Night of Champions.

“Fox Valley Gemini is just a class horse,” said Casey last weekend. “He just shows up on every Night of Champions.”

But what about his much less heralded stable mate?

“Primo Giovanni gives you all he’s got when he’s out there,” replied Casey. “He’s all racehorse. The horse always tries hard and can give you some fast last quarters.”

Sub 27 last panels is the norm for Primo Giovanni who has put almost $35,000 on his season card. The Big Bad John veteran gelding has made over 200 career starts and banked nearly $435,000. He was acquired by the Engel Stable of Illinois LLC at the end of 2020 and joined the Leonard barn soon thereafter, making just short of $40,000 at the age of eight. Primo Giovanni took his mark of 1:50.3 at Hoosier Park as a six-year-old.

Solid Open Trot: Today’s $9,000 Open Trot is a good one.  Three of six participants are coming out of a Night of Champions final—Reign N Shine (Cordarius Stewart) in the Carl Becker Memorial for fillies and mares, and Primed N Powerful (pp 5, Jamaica Patton) and Heath Bar (pp 6, John Lewis), both from the Patton stable) are out of the Plesac.

Cash Hit (pp 2, Kyle Husted) and Rock Party (pp 4, Casey Leonard) have been frequent Open trotters at Hawthorne’s meet, and both are coming off a strong victory in high-level conditioned events. He Tricked Me (pp 1, Mike Brink) completes the field.