Homepage
You are here: Home1 / Mike Paradise2 / Is Sweet 16 Next for Fox Valley Gemini?

By now the 3-year-old ICF pacer Fox Valley Gemini might be thinking that when his race is over a stop for a winner’s picture is automatic before he gets to go back to a stall for some well-earned rest.

After all in each of his 15 career starts the pride of the Terry Leonard stable as done exactly that, get his picture taken in a winner’s circle alongside Atwater, Illinois owner Jim Ballinger and his happy entourage before driver Casey Leonard takes state-bred star pacer back to the paddock. 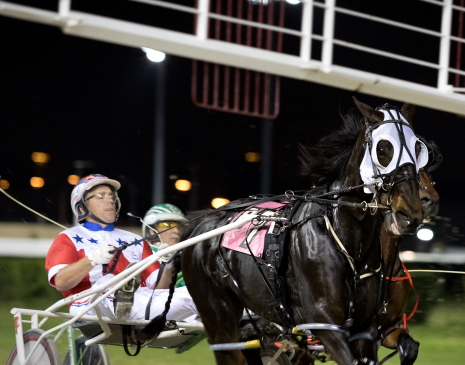 Casey Leonard will be taking the unbeaten 3-year-old ICF pacer Fox Valley Gemini to the gate again Friday night. This time the Terry Leonard trainer pacer goes after his 16th in a row without a loss. (Four Footed Fotos)

After five consecutive victories by an average winning margin of 3 and 1/2 lengths, two weeks ago Fox Valley Gemini notched his 15th in a row by less than one length to You’remyhearthrob (listed at 4-1) who figures to be hustled out by his driver Kyle Wilfong from the outside nine-slot.

Nevertheless Fox Valley Gemini paced the mile in a new lifetime mark of 1:51 flat, showing no signs of any crack in his armor. The talented pacer has the eight-post tonight and Casey has a few options knowing his horse is versatile and can get the job done racing up close or from out of it.

This will be Fox Valley Gemini’s seventh outing as a 3-year-old after going a perfect 9-for-9 in his juvenile campaign when he was named the 2017 Illinois Harness Horse of the Year. A16th consecutive to tonight would boost the pacer’s earnings over the $200,000 plateau.

Second Carey Wide-Open: With the top three Carey point earners all tangling in the eighth race the tenth race second split is there for the taking with no clear-cut standout. Frontier Frank (Kyle Wilfong) is programmed at 5-2. With first-time Lasix user Al’s Briefs (Travis Seekman) at 3-1, Cool Casper (Tim Curtin) at 7-2 and M T Gunslinger (Casey Leonard) at 5-1.

Seeing Stars: Sandwiched in between Friday’s two Carey series showdowns is a nine-horse Open Pace with posts drawn by groups. The red-hot Somestarsomewhere (Kyle Husted) was assigned the outside eight-slot after three straight rather easy victories for trainer Tom Simmons.

Posts four through seven were drawn separately and will be manned by Fox Valley Reggie (JamaicaPatton), Tookadiveoffdipper (Kyle Wilfong), He Gone Jack (Tim Curtin), and Account Rollover (Casey Leonard), another Open starter seeking his fourth in a row at Hawthorne.