There are two certainties for this evening—the sun will set some time tonight, and He’zzz A Wise Sky will be on the front-end in the $50,000 Robert S. Molaro Memorial Summer Final.

The two-time Illinois Horse of the Year is having another banner season and will be a heavy favorite to show his heels to only three Illinois bred challengers like he did in last week’s prep.

If you’re curious why He’zzz A Wise Sky will motor out at the start and go as fast as he needs to be in command, his trainer John Filomeno will reply: “The horse races more relaxed on the front end. He really doesn’t like to race out of a hole.” 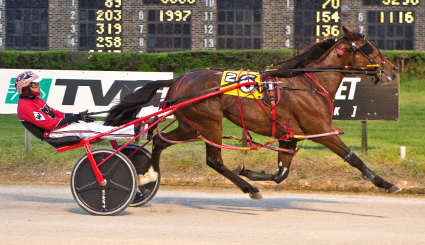 With over $420,000 banked in three and one-half years of racing, it makes sense to race He’zzz A Wise Sky where he’s best and that’s on the lead for Triple ZZZ Stable of Beecher, Illinois.

“I want to race He’zzz A Wise Sky in Illinois as much as I can. The horse is not a good “shipper.” He ships better if I have another horse with him. I try to pick a time where I can avoid traffic and make the trip as short as I can.”

Sometime this year “Illinois best” will head back to Ohio.

“He likes it there with one more turn and a shorter stretch than in Indiana. He loves the turns. He probably can go as fast in a turn than he can on a straightaway.”

Too bad Maywood Park isn’t around anymore. He’d be a terror there.

With just four horses in the Molaro He’zzz A Wise Sky and driver Kyle Wilfong will be leaving from a strange place tonight—inside with the two hole. It’s been a long time since the horse sprinted out from the left of center behind the gate.

I Am Will (Archie Buford) has the rail, Holden Steady (Juan Franco) has thee and Fox Valley Gemini (Casey Leonard) the four.

Catch Him: The Molaro isn’t the only $50,000 championship on the line tonight. Two events later (race six) it’s the $50,000 Plesac championship for older male trotters. 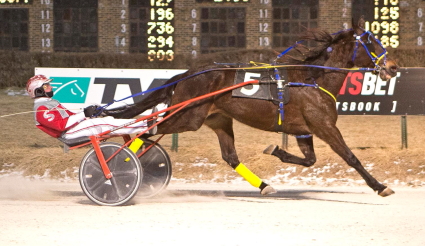 The draw couldn’t have gone any better for last week’s prep winner Talk About Valor (Tavis Seekman). He’ll power out from the one-slot in search of his sixth win in his last seven starts and will be a heavy public’s choice to provide a big boost to his purse earnings for Monee, Illinois owner Shelley Steele.

Trot Stake Prep Finales: Also on Friday’s card are a couple of “Dygert” preps for next week’s three-year-old finals.

That final race on the program is worth the wait.