Homepage
You are here: Home1 / Mike Paradise2 / It’s All in the Family

When it comes to acquiring a yearling the obvious emphasis is on the horse’s breeding. There are other aspects to consider such as size and confirmation nevertheless the youngster’s dam and sire always weigh heavily on a potential buyer.

Sometimes the brothers and sisters of successful pacers and trotters pay off handsomely for their new owner, but sometimes not.

In the case of Fox Valley Triton, one of the contenders in Friday night’s featured eighth race, the Sportsmaster came through in a big way in his first season of racing for his Illinois owners Dandy Farms Racing (Glenview), Ft Racing Stable (Glenview) and Peter Kouchis (Palos Hills). 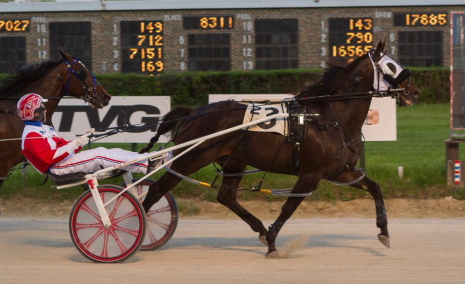 Fox Valley Triton, a son of Sportsmaster, out of the Western Hanover mare Pacific Sister K. was honored last December as the 2019 Illinois Three-Year-Old Male Pacer of the Year after earning $107,374 while annexing the $109,000 Robert Carey Junior Memorial Final on the Night of Champions and earlier the Dudley Hanover stake at Du Quoin.

Mystical M J swept both Illinois State Fair championships in 2011 for trainer Erv Miller while Earndawg was the Orange and Blue final champ on Super Night 2014 and also proved best in the Cardinal (Balmoral), Abe Lincoln (Maywood) and a division of the Madison (Hoosier) that same year for conditioned Roger Welch.

However, it also should be pointed out that Fox Valley Triton’s half-sister MJ’s Sista made only a little over $22,000 in her racing career and siblings Fox Valley Pamela (2013) and Sararuth (201) never made it to the races.

So like I said, you never know how these things will work out.

I do know that we won’t see any of Fox Valley Triton’s brothers or sisters win Hawthorne’s Night of Champions final anytime soon. Both fillies (Roll On Sis and Foxy Fuji) were bred to the Indiana studs Time To Roll and JK Endoffanera and sold to Hoosier owners.

Tonight will be Fox Valley Triton’s second start as a four-year-old. The horse raced inside in his season debut on February 15 that followed three and one-half month vacation and finished fifth, lacking racing room.

Fox Valley Triton was slated to race one week later on February 22 but was scratched sick, so he has missed the last three weeks. The obvious question is: Does he also need tonight’s race? We’ll know the answer later.

Seven of “Triton’s” nine foes have triple digit lifetime earnings, with the ICF seven-year-old He Gone Jack (Ryan Anderson) topping that list with $464,897. Every horse in the $7,500 conditioned pace is older that Fox Valley Triton.

Traffic Jam: There’s a current logjam in the Hawthorne driver standings with Mike Oosting on top with 14, Kyle Wilfong at 13, both Casey Leonard and Todd Warren with 12 and Brandon Bates at 11.