This Friday and Saturday at Hawthorne could be signified as
“D-Days” for a number of two and three-year-old Illinois bred pacers and trotters.

In this particular case the “D” stands for the word “Designate.”

For some horses their finish in one of this weekend’s final legs of Hawthorne’s Night of Champions series will either designate that their subsequent start will be in a lucrative stake final next Saturday evening or in one of the ICF stake consolations races on the ensuing Sunday card.

Interestingly, Hart’s Heart, the recent winner of both the $30,000 State Fair championship and the $29,000 Director’s Award showdown, won’t be competing in the $85,000 (est) Incredible Tillie final on the Night of Champions.

Hart’s Heart was entered for Friday’s final series leg but was declared by the Hawthorne Race Office not to be eligible to race in it. It turns out the talented freshman was never nominated to the Incredible Finale and a look at the stake’s nomination listings on the Hawthorne web-site does verify the ruling is correct. It also opens the door for one or more freshman fillies to gain the stake championship 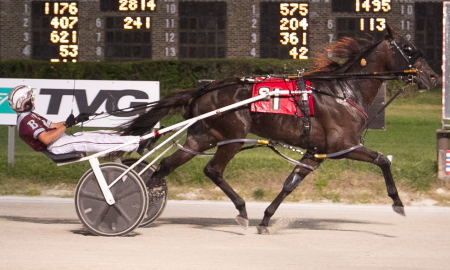 Tonight’s first race opener is a $15,000 elimination race for next Saturday’s $45,000 Tony Maurello Memorial Final. The first eight finishers in the 10-horse field will move on. Awaiting them will be Lilly Von Shupp and Valar Morghulis who received unwanted byes based on having the most season earnings at strictly the Hawthorne meeting.

The 8-5 morning line Maurello elimination favorite is Allbeastnobeauty, the 2019 Illinois Aged Pacing Mare of the Year who spent most of the season in Ohio. She came to Illinois at the end of July and joined the Todd Warren stable.

Allbeastnobeauty has breezed in her last three outings that include a pair of ICF State Fair events for older ICF mares and a Hawthorne Open. Her $54,000-plus season earnings is more than “the bye” mares Lilly Von Shupp and Valar Morghulis have made this year combined.

The last round of the Kadabra stake series had 11 juvenile colt or gelding trotters entered, making it necessary to split the race into two divisions (races six and seven). The Curt Grummel stable’s Bobalou, victorious this summer in six consecutive races, is taking a well-deserved night off to prepare for next week’s championship.