Double Parked and A Girl Named Jim, strong winners in their respective opening legs of the Incredible Tillie for ICF pacing fillies, will have to wait for another night to tangle for the first time.

They drew into different $22,225 divisions of tonight’s Violet stakes for Illinois bred freshman gals. Both fillies are listed as heavy 4 to 5 program favorites in their corresponding events but let’s not forget they’re just 2-year-olds without much racing experience.

A Girl Named Jim, driven by her trainer Jamaica Patton, is in the tougher of the two Violet events. The daughter of Sportsmaster cruised in her Incredible Tillie field with a 1:56.2 debut for Illinois owners Ron Phillips (Athens) and Louis Leinberger (Springfield). 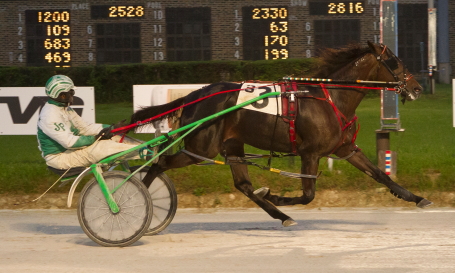 A Girl Named Jim’s principal threats appear to be Fox Valley Vixen, from the barn of veteran trainer Nelson Willis, and the first time starter Sleazy Gal, one of only a few ICF youngsters still under the care of former Illinois based trainer Erv Miller.

Fox Valley Vixen was a fast closing runner-up to Double Parked last week, pacing a 27.2 last quarter. Illinois perineal leading driver Casey Leonard chose to drive Fox Valley Vixen over Sleazy Gal. Another Sportsmaster filly, “Vixen” did rattle off a quick 26.4 last panel in her June 7th qualifier and obviously was hindered in the Incredible Tillie when A Girl Named Jim wasn’t seriously challenged while on the lead.

If you put a lot of stock in breeding when you handicap 2-year-old races, then Sleazy Gal (Kyle Wilfong), owned and bred by the Marty Engel Stable of Northbrook, Illinois should get your attention.

The homebred Sagebrush filly is out of the very successful ICF dam Sleazy One, making her a full sister to Sleazy Does It ($317,916) and Thesleazyprincess (302,287), both past Illinois 2-Year-Old Filly Pacers of the Year for Engel.

Looking to pull off a surprise victory in the fourth race second Violet split are Sign Her Up (Cordarius Stewart), Mollie Hotspur (Juan Franco) and Locked On It (Travis Seekman).

Double Parked, owned by her Tennessee trainer Leroy Hunt, has been bet down to odds of 3 to 10 in both of her first two starts, pacing last week in 1:56 flat after being hand driven in the Incredible Tillie when she draw off by almost a dozen lengths.

New Gal in Town: Tonight’s Open pace for fillies and mares came up big in both numbers (nine) and quality. Coming in from Hoosier Park and assigned with the outside nine-slot if JD’S Chancey Gal, owned by his Ohio trainer Pasko Vucinaj). Tyler Shehan got the catch-drive behind the 5-year-old mare who has gone to the gate 12 times this year in either Ohio or Indiana Opens and came out on top on three occasions. 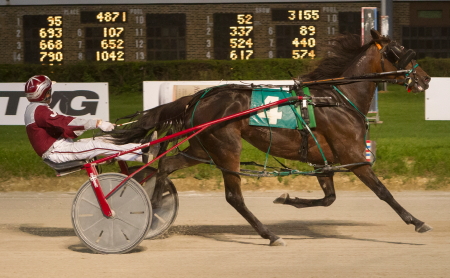 No Help Needed: Not that Illinois’ No. 1 Standardbred needed any assistance but things could not have gone any better for Fox Valley Gemini and his driver Casey Leonard last night in the first of a pair of $12,000 Open’s.

Once again dropping in last from his assigned 10-hole in a five-horse field, Casey watched three different pacers have command by the half-mile pole.

First Royale Rose took the field to 28.1 first quarter, and then He Gone Jack come out of the pocket and grabbed a brief lead before Rising To The Top powered by and took over at the half, reached in a rapid 54.3.

Casey patiently waited with the overwhelming 1 to 9 favorite, tipped the pride of the Terry Leonard stable out in the last turn, and Fox Valley Gemini gobbled up about six lengths in the lane and pulled away to a 1:50.1 victory, a new lifetime mark.

Rising To The Top was second, beaten two lengths and He Gone Jack finished third, another three lengths behind.

Cardinal Outcomes: One race later Casey was back in the winner’s circle with another Jim Ballinger own, Terry Leonard trained pacer as Canadian Mountie captured the first $21,825 Cardinal stake for 2-year-old ICF pacers.

The Ronnie Roberts trained RJ Wulfy ($3.80) easily made it 3-for-3 to start his racing career with an impressive 1:55.2 best mile time in the second Cardinal division with Ryan Anderson in the bike. The 50-1 longshot Ryans Ambassador (Jim Molitor) was second best, 2 and 1/2 lengths behind