RG’s Tracer (No. 1) and Mighty Tony Mac (Np. 5), the one-two finishers in a $21,450 division of last week’s Cardinal Pace, will be back in action this week. RG’s Tracer competes Friday night in round two of the Incredible Finale Stake Series for ICF three-year-old pacing colts and geldings. (Four Footed Fotos)

We’re only a few days away from the start of July, one of the hottest months of the year, however the parade of ICF stake races have already been sizzling at the Hawthorne meet and this weekend they could boil over in sheer numbers.

Not only will there be stake races contested for three-year-old state breds for a third consecutive week but we’ll also get our first look at the ICF freshman class with the opening rounds of the juvenile Night of Champions series.

Some of those babies are on display tonight in the first leg of the $17,500 Incredible Finale stakes series for pacing colts and geldings.

We have some information on tonight’s juvenile field that is worth noting:

Ideal Big Guy, one of two Terry Leonard trainees in the race, was bought for $19,000 and his brother is Ashlee’s Joy (1:54.2) while his stablemate Partyatmosaplace (pp 1) is the Watson Stable home-bred brother of Mimosa Party (1:52.3).

One advantage this year’s crop of ICF two-year-olds will have over past freshmen classes is that they won’t be bothered by the distraction of crowd noises since now a days we  have no spectators.

Nevertheless some of these youngsters could be skittish as they go postward in a pari-mutuel race for the first time. So expect the unexpected, especially at this time of the year, for these babies who have a lot to learn racing-wise. 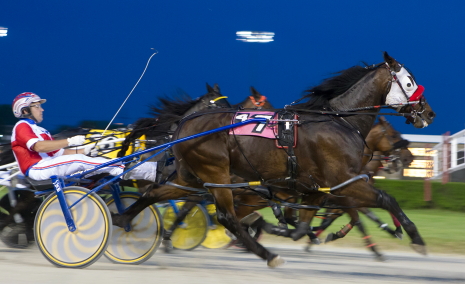 Not This Time: The current top two ICF three-year-old male pacers Fox Valley Ren and He’zzz A Wise Sky have already given us two classic battles this season and while they’ll be in action Friday night, it won’t be against each other.

Thus far the score is two to one in favor of Castle Flight, from the barn of Derek Burklund, but it was all Fox Valley Gemini when the pair met two weeks ago. The pride of the Terry Leonard finished more than two lengths ahead of his rival who changed tactics and came from out of it and finished third after winning his two March Open’s on the front-end.

Fox Valley Gemini (pp 7) is programmed at 7-5 while Castle Flight (pp 6) is at 9-5 first flash odds. Inside of them are (from the one post out) Account Rollover (Scott Robbins), On Duty (Jim Lackey), American Chrome (Todd Warren), Backstreet Lawyer (Kyle Husted) and Bass Player (TravisSeekman).

Now under the care of trainer by Steve Searle, Backstreet Lawyer last competed in Illinois in 2018. He was the third place finisher in the Carey championship racing for the Tom Simmons stable.

Early Post: With a larger than normal 15 race betting card first post tonight has been moved up to 6:30 pm.