It’s round two Friday night of the Plum Peachy stake and after the first ICF 3-year-old pace series the only certainty is that their will be some owners getting a restful night’s sleep while others could be doing a lot of tossing and turning.

The Plum Peachy opening legs produced not one but a pair of shockers in the two $12,000 divisions raced. First the Kim Hamilton Stable’s Fancy Creek Jolene (Matt Avenatti) popped at odds of 45-1 and then a few races later Filly Forty (Jamaica Patton) lit up the tote board at odds of 58-1.

Earlier this month I wrote here about Filly Forty so this time around I’ll focus on Fancy Creek Jolene, the Frank Marcolini owned filly who began her career in what can only be described as in dreadful fashion. 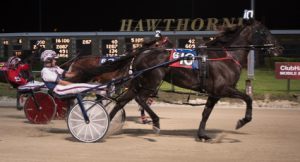 In five starts as a freshman, all in ICF freshman stakes, Fancy Creek Jolene made a scanty $825 as a 2-year-old and that amount came in just one check, a fifth place in round one of the Incredible Tillie and it was a far-back fifth place finish at that.

Fancy Creek Jolene went off stride in that first leg and she also went off-stride in the second leg. She did manage to stay flat in the third round but finished ninth and was distanced, beaten some 25 lengths. In her final Tillie Leg she starting running again instead of pacing and earned zip. In her final 2-year-old start, the “Tillie” Stake Consolation, she, you guessed it, went off stride.

With her $3,000 sale price as a yearling, her $1,250 Incredible Tillie nomination fee, her $200 starting fees in each of the four series legs and her normal training and vet bills Fancy Creek Jolene might have had her South Chicago, Illinois owner seeing red. For sure the bleak first season campaign put her owner’s most recent horse racing venture in the “Red”

In her mid-April season debut at Hoosier Park the filly couldn’t stay on stride and finished up the track again. However she did have a strong qualifier on the Indiana track a couple of weeks later, winning in 1:55.2 with a 27.3 last quarter.

So things were looking up for the Sportsmaster filly but alas, not for long.

Jolene was nominated for Hawthorne’s Dave Magee Late Closer series but went off stride in her first leg on opening night (May 11). A week later in her second Magee outing, it was more of the same, so after three starts as a sophomore she had earnings of zero dollars.

As they say “that was then and this is now” and now she has $14,600 on her card by turning things around in a big way. The turnabout actually began in her start before the first $12,000 Plum Peachy with Matt Avenatti at her lines for the first time.

“Jolene” was ninth, ahead of only a breaking horse at the three-quarter pole and still ended up second best at 91-1 odds. In the Plum Peachy she had the 10-hole and was 10th at the first quarter, a dozen lengths behind. She was ninth at the half, eighth at the top of the lane and then unleashed a 26.2 last quarter to pop with a 1:55.1 mile.

Since then “Jolene” added another victory, this one in an ICF non-winners of two event, and was a close second, dropping a head decision, in another NW 2 against some open company fillies.

As it turns out Fancy Creek Jolene’s size was the primary reason for the unfortunate start to her racing career and her owner’s patience with his filly is now starting to pay dividends.

“She’s a big mare and she just wasn’t fully developed as a 2-year-old, said her Momence, Illinois trainer Kim Hamilton. She has a lot of speed but she just couldn’t handle her speed.”

“She has really matured but even at the beginning of her 3-year-old year season she still had a lot of learning to do. Hopefully she has it figured out and can keep it going forward,” said the Iowa native.

With 24 entries for Friday’s Plum Peachy the second leg of the series was split into a trio of $12,000 divisions with Fancy Creek Jolene (pp 2, Matt Avenatti) set to meet the other first round stake series winner Filly Forty (pp 1, Jamaica Patton) for the first time. The latter was a recent purchase by A Piece Of The Action (Culver City, California) and now races out of the barn of conditioner Donna Holt.

Lady’s Party (pp 1, Casey Leonard) fresh off a romping 3 1/2 length victory a week ago in her first start for trainer Terry Leonard is expected to be the first division (second race) heavy favorite.