Homepage
You are here: Home1 / Mike Paradise2 / Kudos Hawthorne for “Right Thing to Do”

When was the last time you saw a horse on the Chicago circuit win five consecutive Opens or Free For All events and not told to leave town?

I’ve been covering Illinois harness racing for a very long time and I never saw it happen. A dominant horse winning at the track’s highest level is usually given the heave-ho by a Chicago circuit race secretary after three in a row, maybe four straight at the longest.

Nevertheless, Fox Valley Gemini, the most popular pacer in our state with back-to-back Illinois Harness of the Year honors, will go after a sixth consecutive victory tonight for trainer Terry Leonard and owner Jim Ballinger of Atwater, Illinois. 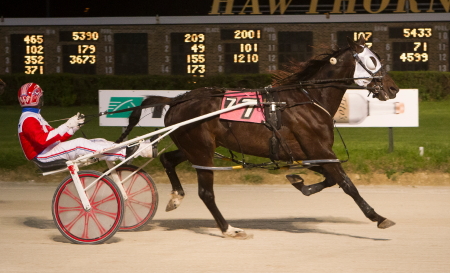 Here’s a familiar sight from a week ago. It’s Fox Valley Gemini (Casey Leonard), winning at Hawthorne. The much heralded ICF 4-year-old goes after his sixth straight victory in one of two $12,000 Opens tonight. (Four Footed Fotos)

As usual, Casey Leonard will be in race bike behind the now four-year-old star ICF pacer, who has racked up an amazing 25 wins in 26 starts at Hawthorne and the last pair coming from the 10-hole in first a field of five, and last week a seven horse field.

Casey should be used to the 10-slot starting point. It hasn’t mattered a bit to Fox Valley Gemini, he’s been much the best in both “handicapped” outside starts and I’m confident he will be again.

Kudos to Hawthorne’s race secretary Robin Schadt for figuring out yet another way to keep Illinois best horse racing in his home state. Robin did so this time, by offering two $12,000 Open’s.  A draw determined which horses would face Fox Valley Gemini and those competing in another Open for an identical pot although, that one would be “Gemini-less ”.

Coming up with another way to keep a star ICF horse racing at in Illinois “was just the right thing to do,” said Robin. “I know the horse will be leaving soon for an out-of-town stake and then he’ll be back. I wanted to make sure he keeps racing here before he leaves for a few weeks.”

Fox Valley Gemini is headed to Running Aces in Minnesota for its $50,000 Dan Patch championship. Eliminations (or a prep) will be on July 15th with final on the 22nd of July.

Unless it’s for an open company stake, an ICF pacer should never have to leave the state to get raced, and that’s even more imperative nowadays.

The long overdue passage of “Slots at the Tracks” bill is about to be fulfilled once the governor puts his signature on the document. It will finally eliminate Recapture, bring slots and table games to Hawthorne, ensure a huge financial boost is forthcoming for ICF races, and provides for a much needed new Standardbred only racetrack, (ala Racino), in the south suburbs that will most certainly rake-in quite a bit of dough for future purses.

The last thing we want to do is discourage owners from buying ICF yearlings.

Do we want to send the message to prospective owners to go ahead purchase a state bred yearling, race the pacer or trotter here, but don’t let your horse get too good once he or she turns four or it’s persona non grata in Illinois.

Does that make sense?

All horses sooner or later will get sick, or get sore and may go lame. Just like human athletes they don’t stay on top forever, so let’s enjoy them here while they are at the pinnacle of their game.

Is there another sport that boots its best participants off the team or told to leave town for being too good?

I don’t think so.

If Fox Valley Gemini’s connections want to race their horse for about half the money less in their home state than elsewhere in the Midwest, they should be able to do just that and be lauded by those of us in the Illinois harness racing industry.

And the Hawthorne Race Office should be applauded for an innovative way to make it possible to do so. 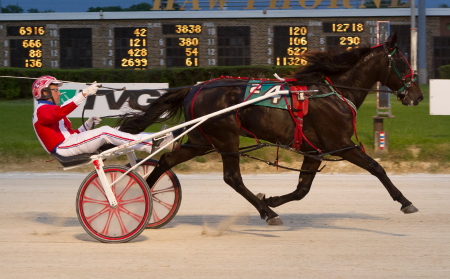 The Ronnie Roberts trainee R J Wulfy was almost a dozen lengths the best in a first leg of the Incredible Finale with Casey Leonard. Ryan Anderson gets the catch drive tonight for the second division Cardinal stake. (Four Footed Fotos)

Cardinal for Freshman Pacers: A pair of $21,825 divisions of Cardinal stakes for 2-year-old ICF colt and gelding pacers is on Friday night’s 12-race program.

The only first-time starter in the division is the Nelson Willis stable’s Fox Valley Ren. The colt is a half-brother to the very good ICF pacer Fox Valley Jazzy (1:52.1). A son of Sportsmaster, Fox Valley Ren sped to a 27.1 last quarter in his winning 2:01.2 qualifier at Hawthorne.

Those Babies Are Back “Governor Signs Our Jobs Bill.”
Scroll to top