We won’t have to wait long to see how the second legs of a pair of Late Closer Series come out tonight. They’ll go as the first three events on Saturday’s 11-race card.

The most intriguing appears to be the second race, first division of the Mike Paradise Series for ICF pacers. Six of the seven starters who put on a spirited battle a week ago will slug it out again.

It was Ima Skydancer from the Mike Brink Stable who got his neck in front at the end of a 1:57 flat mile with Mike Oosting, thanks to a rapid 26.3 last panel. Landing the rail tonight should bode well for the Skydancer Hanover gelding.

Ima Skydancer followed up the live cover of In Your Eye (Ridge Warren) in leg one when that Mike Brown trainee was only a neck short. While Ima Skydancer leaves from the inside one slot In Your Eye starts from the outside seven post.

In between those two ICF sophomores is No. 4 Zone Blitz, only a length behind the winner after showing a strong move on the backside when he went from fifth to first in the second quarter.

Then there’s the Bob Walker Stable’s Kid Rocky (Kyle Wilfong, pp 2). The youngster was given a pocket trip by Kyle but there’s no passing lane at Hawthorne and Kid Rocky never did find racing room, ending up fourth, beaten less than two lengths.

Sullivan, another Mike Brink trainee, is the 3-year-old to beat in the second Paradise split after cruising to a 1:55.4 front-end triumph with his trainer in the bike a week ago. Casey Leonard takes over his lines tonight and he leaves from post four in a compact field of six pacers.

Sullivan’s stablemate Causway (Mike Oosting) could be a major threat if he can remain on stride this time. The Yankee Skyscaper gelding has been having trouble staying flat for the mile.

A break before the start proved costly to Commondiscourtesy (Kyle Husted) in leg one as the 4-5 favorite. The black colt trained by John Zawistowski still took second behind Sullivan.

JD Jay Dee (Kyle Wilfong) wasn’t far off last week, finishing third, two lengths in back of the winner and that was his first race since last September. JD Jay Dee drew nicely with the one-slot. Daddy Let Me Drive (Trenton Watson) and Trail Blazer (Ridge Warren) are the other Paradise hopefuls in the third race. 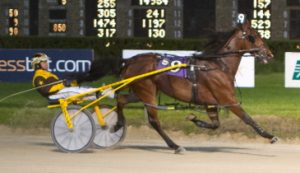 The pre Bob Larry Series favorite Hot Rod Dylan lived up to his billing last Saturday when he breezed to a snappy 1:52.3 victory with Oosting,  even though the gelding had to work fairly hard to make the top from the nine-slot. The Nelson Willis trainee got to the the half in a time of 56.1. He was then backed down (29.2) in the third quarter and drew away in the lane with a 27 flat final quarter.

With eight season wins already and a previous Late Closer Series Final win to his credit this season, (that came in Ohio back in April) we can expect Oosting to have Hot Rod Dylan on the move early again. He’ll open at even-money.

His main threat looks to be the ICF pacer Fox Valley Nemitz, who could relish the move from the 7-slot to the rail for driver Casey Leonard and is the 9-5 second morning line choice. Now trained by Nick Giberson he was almost 11 lengths behind Hot Rod Dylan last week and after a slow third quarter had no chance to catch the heavy favorite.

It was also Fox Valley Nemitz first race as a 3-year-old. As a freshman the Richess Hanover gelding captured two legs of the Incredible Finale stake series but had the misfortune to get locked-in and pushed back in the $100,000 Final on Hawthorne’s Night of Champions when he raced out of the barn of trainer Joel Smith.

Looking to pull off an upset in the Bob Larry are Fourboltmane (Tim Curtin), Bowedfortyova (Kyle Husted), Sporty Redhot (Kyle Wilfong), All In No Out (Bob Smolin) and Slzburgerslzburger (Ridge Warren). 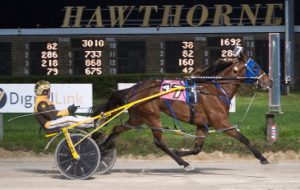 Bands Houdini ($10.00) overtook last week’s Daryl Busse series winner Picky Picky Valor in the lane when that trotter went off stride. Driven by Kyle Husted, the Steve Searle trainee was a comfortable three lengths in front of Totally Pazzazzed at the end of a 2:00.2 mile raced on a “good” track.

I Could Care Less ($5.60), driven by his 70-year-old Michigan owner and trainer Keith Crawford, stormed up the center of the track to take leg two of the Bea Farber series in 1:58.4 over a tiring Energy Bar by 1 and 1 /4 lengths. BC’s Da Winner was third. Leg one victor Daisy Lou Duke made a break near the start and was a non-factor.

The Ken Rucker Stable’s Evergreen Elite ($5.00) was clearly the best Friday night in the featured $15,000 Open Pace Handicap. Driven by Mike Oosting, the 5-year-old gelding was parked out to a 27.2 first quarter on the off track, had to put away a strong bid from Account Rollover in the middle-quarters (28.1 and 28.2), and still had enough left to pull away from the pocket horse Yankee Bounty in the 1:53 flat mile.