When Ridge Warren rallied Connie On The Go to victory in last weekend’s Violet Pace a bit of history was made in the Illinois Department of Agriculture’s long running two-year-old stakes program.

Ridge’s Violet triumph followed a winning drive by his father Todd Warren a night earlier in the Cardinal Pace making it the first time that a father and his son were the winning drivers in the same season during the 36 years of the State sponsored ICF freshmen stakes.

For the 31-year-old Ridge his Violet victory behind the Jamaica Patton trained filly had to be particularly sweet because he “loves” beating his dad on the racetrack and it came just one day after his father earned the family’s bragging rights by bringing home the 10-1 longshot Frontier Charley to his win in the Cardinal stake. 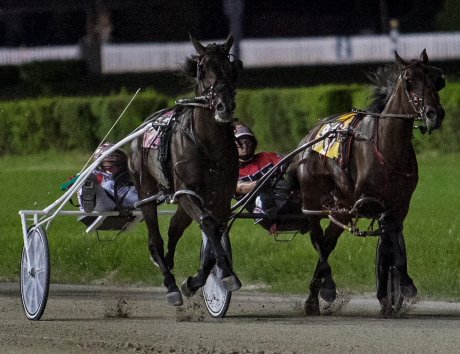 The Warren’s Rule: The senior Warren also won with Frontier Charley ($7.40) in last night’s second leg of the $17,500 Incredible Finale stake series when he gave the Jim Eaton trained freshman a shrewd pocket trip. The front-stepping Mekka’s Big Guy (Tyler Shehan) had to settle for second, beaten a half-length in the 1:57.1 mile.

Nonetheless, Friday evening belonged to Ridge, who drove five winners on the card, matching his dad’s achievement of a couple of weeks ago on a Hawthorne card. Four of Ridge’s wins came in consecutive races (third through the sixth) which included Ponda’s Prospect upset victory over his Terry Leonard stable-mate Fox Valley Gemini in the Open Pace.

Sent off at 14-1, Ridge pushed the early pace (27 flat first quarter) with Ponda’s Prospect ($31.80) before taking the two-hole behind Castle Flight. When the pace-setter tired in the late going Ponda’s Prospect’s 26.4 final panel was enough to hold off the fast closing (26 flat) “Gemini” by a neck in the 1:51 mile.

Princess Eyes Altar: While the Jamaica Patton trained home-bred Connie On The Go has received much of the division’s accolades with her back-to-back stake triumphs while already putting $30,000-plus on her first season card for owners and breeders Ron Phillips (Athens) and John Carver (Rock Island), the Gary Rath Stable’s Princess Mooss has given “Connie” all she can handle in their first two meetings.

Princess Mooss has dropped close decisions in the first two stakes, beaten less than a length in the first leg of the Incredible Tillie and by just a neck in last weekend’s Violet. The Rath trainee has already made over $15,000 for her Berwyn Illinois owner Al Beals who dished out $31,000 to acquire the daughter of Ashlee’s Big Guy at the 2019 Illini Classic Sale when her name was Ashlee’s Chanel.

Kyle Wilfong will again guide Princess Moose tonight as the filly looks to shed the bridesmaid role and step up to the altar for her maiden victory. She’ll leave from the four-slot and opens at 9-5 odds.

Clearly The Bomb (Todd Warren), third in the two recent juvenile stakes has the seven post and is listed at inviting 10-1 odds in the program after she raced without cover in last week’s Violet.

Also looking to bank the winner’s share of the $17,500 “Tillie” pot are Movie Sage (Kyle Husted), Age Of Sage (Casey Leonard), Kadi’s Fortune (Freddie Patton Jr.), Scorecard Dandy (Juan Franco) and Dandy Duchess (pp 8, Tyler Shehan), a stable-mate of Connie On The Go who is in great shape starting with the pole position opens at odds of 6-5, which sounds about right.

No Ordinary Qualifier: A number of Illinois bred pacers and trotters are staying sharp for next weekend’s Night of Champions stakes series events by racing this weekend. However a couple of notable absentees are last season’s two-year-old pacing champions Fox Valley Ren and Fox Valley Exploit.

Their trainers instead entered their prize ICF three-year-olds in Saturday’s qualifiers and they ended up in the same race, the first that goes at 5 o’clock. Fox Valley Wren is 4-for-4 this season and is atop the Carey standings for colts and gelding while Fox Valley Exploit, 3-for-3 as a sophomore, sits on the top spot of the Plum Peachy series for fillies.