A trio of five figure “Summer Series” finals are the center of attentions on Friday’s 12 race Hawthorne card.

The Bea Farber trot final brings together last week’s elimination winners Reign And Shine (Jordan Patton) and Rockyroad Aldo (Kyle Husted), along with the second through fifth place horses in each elimination. 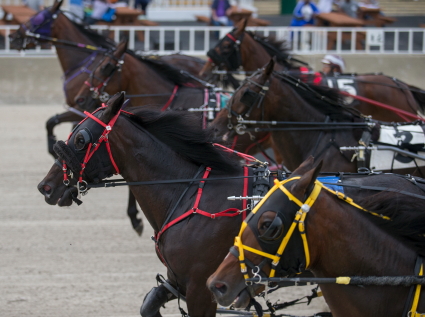 Horses will be off and pacing, or trotting, in a trio of Summer Series finals tonight at Hawthorne. (Four Footed Fotos)

The Bea Farber elimination conquerors got to the winner’s circle in much different circumstances. Reign and Shine, driven by 23-year-old “P” driver Jordan Patton, had to come from far out of it while Rockyroad Aldo (Kim Roth) had a much easier time drawing off on the front end for driver Kyle Husted,

Reign And Shine was in sixth most of the way and turning for home looked to be too far back however the home-bred put on a strong stretch drive and knocked a full second (1:58.3) off his previous fastest mile.

Beaten one-length, the second-place finisher Really Renee (Tyler Shehan), was stuck inside, got out late and had to regain his best stride.

Interestingly, while Reign And Shine was sired by the Illinois based trotter Cassis, the Mr. Carroll and Diane Hays owned, bred and trainer mare’s dam Faith And Trust was a pacer, as was her sire Ft Apache Hanover.

One race later Husted put the Kim Roth owned and trained Rockyroad Aldo on the lead and the slender driver watched as one by one, several other trotters go off stride. By the head of the stretch the outcome wasn’t in doubt only the winning margin, which turned out to be over 10 lengths at the end of the 1:57.2 mile.

Last week’s Busse elimination winners RSVP (Kyle Wilfong) and Skyway Beebop (Tyler Shehan) landed the two outside posts, the nine and ten, in that order, making their task of a return trip to the winner circle more difficult. However, both have shown in the past that they have gate speed when it is called upon.

The other Busse hopefuls are The Black Beauty, Look At Dat Kat, Awaysbmygg and She Loves To Jiggle.

Looking to light up the board at expected double-digit odds in the Paisley are Dirtylittlelies, Ashlees Fine Girl, Dancin Eyes, Pootie Cat, Yankee Joanne, Style And Spirit and Sister Said.