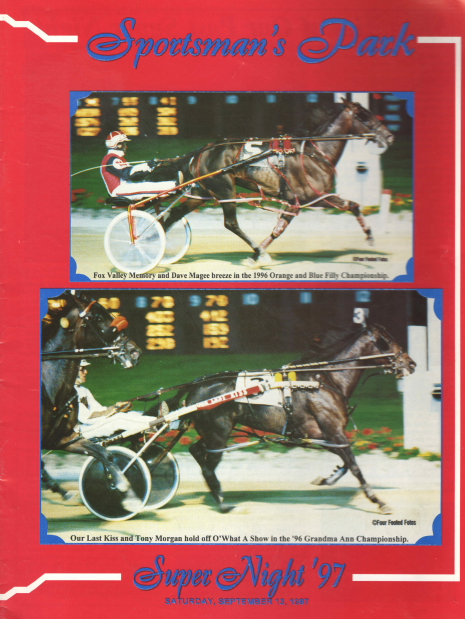 A look at the front cover of Sportsman’s Park 1997 Super Night program.

What began at Sportsman’s Park as an evening of championship ICF Standardbreds in mid-September of 1989, evolved into the richest and most successful night in the history of Illinois harness racing.

Super Night became the most anticipated racing program on the Chicago harness racing circuit for its fans, horsemen and their owners. It was expected to remain at the Cicero, Illinois facility for decades.

Instead, Super Night at Sportsman’s Park only had a run of nine racing seasons. Unexpectedly, Super Night 1997 on Saturday September 13th, a 12-race card with $2.15 million in purses on the line, was the racetrack’s final one.

Balmoral Park would take over Super Night in 1998, but not before some of the crème de crème ICF pacers gave a jam-packed Sportsman’s crowd some cherished memories in 1997, its final season of harness racing.

Ohyouprettything and Big Tom, a pair of two-year-olds from the always powerful barn of Joe Anderson were the expected stars that evening. Both freshmen dominated their respective ICF divisions all season long and were listed at 2 to 5 in the official program.

Ohyouprettything was two and three-wide the first half mile, at 10 cents on the dollar to make the front, but once there she cruised.

Ohyouprettything’s victory in the 1997 Filly Orange and Blue 2-year-old filly final was one of three championships won by driver-trainer Joe Anderson on the last Super Night program at Sportsman’s Park. (Four Footed Fotos)

In a post-race interview “Little Joe” had this to say: “There’s more pressure on you when you like up at 1-5 or 2-5. A lot of times you’re forced to over-drive your horse and sometimes that can make it real tough. I feel I have an obligation to the public to give my horse the best possible shot even if it gets you into a bad situation. The horses don’t know the odds. Only the drivers do.”

Anderson drove both Ohyouprettything and Big Tom to their Super Night titles and picked-up a third championship drive that night when he brought home Hooked On A Feeling to a 1:52 flat victory in the $185,000 Pete Langley Memorial Pace, overtaking the favorite Hot Chilli Pepper in deep stretch.

The other three Super Night 1997 champions were the Greg Lance Stable’s Fox Valley Memory (Dave Magee), in the $151, 000 Grandma Ann 3-year-old filly pace, trainer Dave Isaacs’ Shady Veil (Jim Curran), in the $100,000 Ann Vonian for mares and Sjoken In The Hole (Dave Magee), from the barn of trainer Ron Anderson in the $100,000 Dan Patch for older horses and geldings.

Fox Valley Memory had an easy time in the Grandma Ann for owners Arch S. Golden Stables, drawing off more than four lengths in 1:52.4 and it gave her back-to-back Super Night victories. The Incredible Finale filly also won the 1996 Filly O&B Final as a two-year-old.

Needless to say, she was certainly worth the wait for Isaacs, who was back in the winner’s circle with Shady Veil on Super Night 1998 at Balmoral Park. 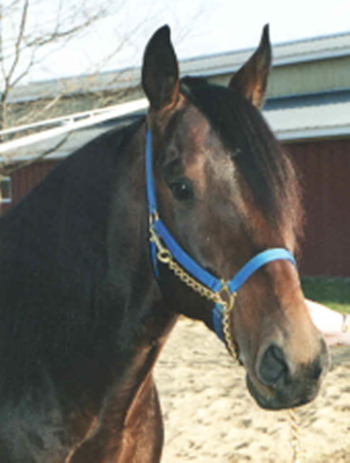 The Joe Anderson Stable’s Big Tom was much the best in the $300,000 Colt Orange and Blue freshman championship, the last Super Night race contested at Sportsman’s Park.

The backers of Sjoken In The Hole, had a lengthy wait before learning they would be able to cash their winning tickets on the pacer who only two weeks earlier was plucked out of a $16,000 claiming race by trainer Ron Anderson for new owner Alex D’Onofrio,

The betting favorite Jeffrey’s Pet (1:53.1), finished first in the Dan Patch Final, but impeded Sjoken In The Hole in the stretch and was placed second by the stewards.

Sjoken In The Hole was indeed a Cinderella story for his Medinah, Illinois owner. The 4-year-old gelding was racing in $8,000 claimers earlier that summer at Sportsman’s and the $16,000 claim to a new barn came just one week before the Dan Patch eliminations.

In a pre-race program story, trainer Ron Anderson said: “We didn’t claim him to have a Super Night horse. In fact we hadn’t even thought about the Dan Patch until the last minute. The elimination just looked like a good place to race him so we did.”

Sjoken In The Hole knocked off two and 2/5’s seconds off his previous best mile with a winning 1:52.3, clocking in his elimination. “Now that he won his elimination and made the final anything can happen” said his trainer.

And it did with the 1997 Dan Patch championship, the last at Sportsman’s Park.