Homepage
You are here: Home1 / Mike Paradise2 / Looking Back with Lavern Hostetler

Through the past decades Illinois Harness Racing Hall of Fame horseman Lavern Hostetler has had many memorable nights of racing in his driving career nevertheless there are two that standout above all others:

Lavern’s drive in the summer of 1986 behind the Illinois champion Hothead against the eventual national Horse of the Year Forrest Skipper in the Sportsman’s Park leg of the U.S. Pacing Championship and . . .

. . . When Hostetler stole the show on Super Night 1989 at Sportsman’s in the inaugural program of what would become Illinois showcase evening of harness racing for the next 30-plus years.

Back then the U.S. Pacing Championship was a three-leg series where the very best pacers in the country knocked heads on a half mile track (Roosevelt), a mile track (Meadowlands) and a five-eighths (Sportsman) with a lucrative bonus going went to its champ.

Forrest Skipper won the first two legs of the series by a combined hard-to-believe 31 lengths and was expected to an easy winner in the last leg raced at Sportsman’s. As it turned out, it was far from easy.

Hothead and Hostetler gave the No. 1 horse in the country all he could handle that summer night, dropping a head decision after a thrilling side-by-side duel the length of the stretch. Plus the heavy winning favorite had to survive a foul claim.

To view the race, and the great call of track announcer Gil Levine go to: https://www.youtube.com/watch?v=aMygKcKvre4

The video was taken from the old Chicago Harness Racing program where a much younger and much thinner author of this story produced and co-hosted the nightly TV show with Maywood Park’s Eleanor Flavin. 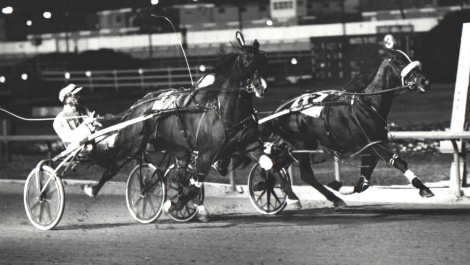 Hothead and Lavern Hostetler gave 1986 Harness Horse of the Year Forrest Skipper (inside) all he could handle in a memorable U.S. Pacing Championship at old Sportsman’s Park. (Pete Luongo Photo)

Hostetler recalled the Hothead vs Forrest Skipper race like it was yesterday:

One week later Hothead, the 1985 Illinois Horse of the Year, and Hostetler came back with a vengeance and zipped past in deep stretch to knock off the millionaire Chairmanoftheboard (John Campbell) in the $71,200 American National Aged Pace, thanks to some quick-thinking from Lavern.

“After the race Campbell told me: ‘Okay son, you outs-smarted me that time but you’ll never do it again.’ Since then every time I run into Campbell he always brings up the Chairmanoftheboard race.”

As far as the first Super Night program Hostetler was very optimist about his drives even though none of his horses were the favorite.

“I still thought I had a chance to win with six horses,” said Lavern, who would tally with five on that 1989 September evening and earn the tile as “Mr. Super Night” with four championship victories and one consolation stake winner. 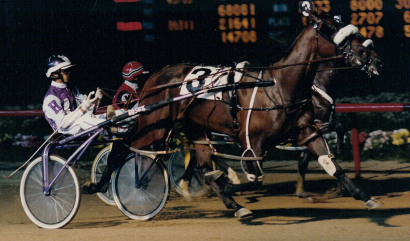 “I had a horse in the first race (Sir Wolf) with my friend Lou Tatone and I told Lou I was going to use his horse as a guinea pig to see if the track that night was front-end or back-end. I took Sir Wolf out and got an up-close trip but the horse stopped in the lane. I came back after the race and said to Lou: “That’s it I’m driving all my horses tonight from the back.”

Hostetler’s then proceeded to win the Ann Vonian with the late charging Dinero Two, the Grandma Ann with the 30-1 longshot Lady At Work, coming from far out of it, the Pete Langley Memorial from the second tier 11-slot with Son Of A Cup and finished off the memorable night with his beloved Gosox in the Orange & Blue colt championship.

Laverne also made a trip to the winner’s circle that first Super Night with Dr. Walker in the Dan Patch Consolation stake.

The slender Elkhart, Indiana native with over 3,600 career dash winners and over 540 trainer wins sort of stumbled into a harness racing career where horses he’s drove won over $1 million in 12 consecutive years (1980-1991) and he posted more than 115 winning drives 18 consecutive seasons (1980-1996).

I’ll let Lavern tell you how he got started in the Standardbred industry:

“I was working in a factory as a teenager on mobile homes. One day it was 75 degrees outside and asked myself ‘what am I doing here.’ I hated working inside. I was an outdoor person, so that day I quit my job after lunch and headed out to my favorite spot to buy myself a Cherry Coke. I drove past a horse farm every day to work that was owned by Dwayne Pletcher and he was out there jogging a horse that day. I said to myself: ‘that looks interesting’ so I stopped and went up to him, and asked him for a job.

“He said he needed some help and hired me right on the spot. He wanted me to start right then and there but I told him I would be back in the morning to begin work. I still had a Cherry Coke to get.

“I worked for Dwayne for seven years starting from the bottom mucking stalls and progressing on from there before I left to go on my own.”

Hostetler’s first professional drive came in 1975 at Balmoral Park. By 1977 he was up to 120 drives and 13 winners, Three year later he steered 1,189 horses and posted 203 first place finishes. The rest, they say, is history.

I don’t know about you but for some reason a Cherry Coke sounds good right about now.