Homepage
You are here: Home1 / Mike Paradise2 / Looks like a Winning Saturday Recipe

The first Saturday card of Hawthorne’s summer meeting has all the right ingredients to make it an entertaining and competitive 12-race card.

The winning recipe for the evening begins with an earlier-than-normal 6:30 pm first post, a conditioned trot with two different 2017 Night of Champions stake winners in the mix.

Then you first add a well-balanced Open III pace for older mare pacers, followed by a wide-open Open III trot. Blend in a pair of first round divisions of two Late Closer Series with no clear-cut favorites.

Sprinkle in more competitive conditioned and claiming races to complete the program with a last race scheduled to go off at 10:32 pm and enjoy. 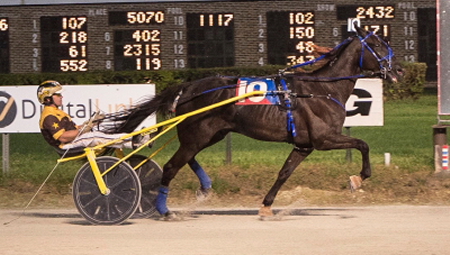 The fifth race, Open III pace for fillies and mares will line up from the pole position out with, I Dance U Prance (Kyle Wilfong), Narcian Jewel (Casey Leonard), Night of Champions victor Bucklegirl Bobette (Kyle Husted), Pretty Image (Tim Curtin) and Sweetshadyshark (Travis Seekman). Barcian Jewel won a Open I Pace this past winter at Hawthorne.

The Brett Wilfong Stable’s You’remyhearthrob (pp 1, Kyle Wilfong), is listed as heavy 7-5 odds in the ninth race ,second Bob Larry split, after a strong second place finish at Hoosier in her sophomore debut.

The Mike Paradise Late Closer divisions will go as races seven and ten. It’s strictly for ICF 3 and 4-year-old pacers without $10,000 in career earnings going into April 1st of this year.

Never Say That (Kyle Wilfong), overcame the 10-hole last night in the first leg of the Daryl Busse Series and was all alone at the finish wire. (Four Footed Fotos)

Sent off at 22-1 odds the Roshun Trigg trotter went right to the top from the pole position and never looked back, trotting a 1:58 flat mile at a $47.20 winning mutuel in the second race.

Despite leaving from the 10-hole in a 12-horse field Never Say That ($7.60), was an easy winner in the first round of the Daryl Busse trot. Driver Kyle Wilfong left with the Bret Wilfong trainee, avoided first a breaker going into the first turn and then another coming out of it and went on to lead at every pole in the 1:59.1 mile.

Fox Valley Catwalk ($4.40, Tim Curtin ), was all out to extend her winning streak to six in a row in the Walter Paisley opener, edging Princess Oshie by only a head with C Far right there third, a half-length behind in the 1:56.1 mile.

Juan Franco rallied the 27-1 longshot Ryan’s Mistress ($57.60), to her victory in the first round of the Dave Magee series for trainer Roshun Trigg. The 3-year-old filly covered the mile in 1:58.1 with a quick a 27.1 last quarter.

Frontier Red nudged-out the favorite Piana for second, beaten a little more than one length.