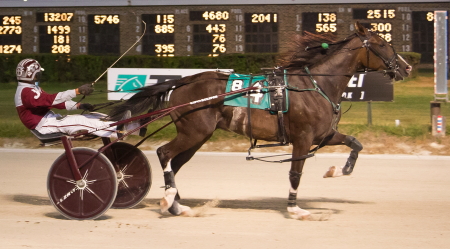 Franco had Lou raptor trotting in fifth most of the way while the assigned 10-hole certainly hurt Annas Lucky Star who raced in eighth throughout and was 10 lengths behind the front-stepping Classic Venture at the half, reached in 57seconds.

Lousraptor had a fourth length advantage over the 4-5 favorite heading into the last quarter of the mile and ended up three lengths the best in 1:54.4, winning for the fifth time this season for owners Flacco Family Farms of Alexis, Illinois.

Annas Lucky Star’s 27.2 last panel enabled her to finish a half-length ahead of the third place trotter Scramble Camp, a 60-1 longshot. Lousraptor was sent off at 7-1and paid an even $17.00

Todd Nearing 5,000th: Driver Todd Warren is closing-in on a major milestone in his profession. The 55-year-old Illinois native goes into Sunday night just 8 winners away from 5,000.

Todd is currently third in the Hawthorne driver standings. Warren had been spending his recent summers competing at Hoosier Park but made a decision earlier in the year to remain on the Chicago circuit this year to be closer to his home in the south suburb of Manhattan, IL

The trainer’s race likely will go down to the final weekend. With nine racing cards left Mike Brink had sent out 41 first place horses. Terry Leonard was close behind at 40 while Steve Searle was right there with 39 winners.

Five Isn’t Enough: With only five horses entered for Sunday’s scheduled Open filly and mare pace the event was scraped for this weekend. Instead a high level pace for distaffers will highlight the 12-race program.

The three-year-old Illinois bred filly Sign Her Up (Juan Franc) will also go postward in the eighth race, her seventh start in the last six weeks for trainer Charles Arthur.

The Sagebrush filly has already locked up a starting berth in the Plum Peachy Final on the September 19th Night of Champions for her Mississippi owners and is the only horse to beat the division’s leader Fox Valley Exploit this season. A win Sunday night would boost Sign Her Up’s first two seasons of purse earnings over the $100,000 mark.

Let the Bidding Begin: The 22nd annual Illini Classic Yearling Sale will be held this Monday at the Illinois State Fairgrounds in Springfield.

The Labor Day auction begins at 11 am in the Horse Show Arena, located immediately west of the Coliseum. On-Line bidding is accessible through Proxbid which will also offer live sale video.

Pedigrees of the sale horses and further information can be found at www.illiniclassic.com