When Major Bliss made his local debut at Hawthorne back in the second week of May for trainer Herman Wheeler I couldn’t help but notice that the pacer was making his first career start at the age of six and I asked myself:

“Why is this horse just beginning to race at that age?”

As it turns out it was because Major Bliss was a riding horse at a time most horses are in their prime racing careers. Despite his very much belated start the horse is having a banner first racing season at the age of six for Herman. 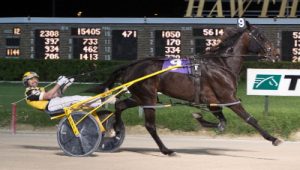 Major Bliss climbed up the Hawthorne conditioned-race ladder by rattling off seven consecutive wins before a second place finish in late July. He quickly rebounded from his first defeat by going to Ohio and capturing a $25,000 Open on the five-eighths track at Scioto Downs with a quick 1:51 flat mile.

The horse came back to Illinois and finished third in his first attempt in a $13,500 Hawthorne Open a couple of weeks ago when he was beaten less than a length by Let’s Drink On It.

The Wheeler trainee immediately got back to winning races last week, nailing down his ninth triumph in 11 tries, this one coming in a high-end Hawthorne conditioned race. All eight Hawthorne wins have come with driver Bobby Smolin .

Wheeler purchased Major Bliss from his Shreveport, Louisiana friend Benjamin Choyce in early April of this year and the horse has gone on to reward Herman with $50,479 in purse earnings in his first season of racing and the late-bloomer isn’t not done yet with five more weeks of racing to go at Hawthorne’s summer meet.

“He’s been a blessing,” said Herman, who has a farm in his hometown of Monroe, Louisiana.

“My friend got him a couple of years ago from a guy in Texas who was using him as a riding horse. The horse began to show some potential so he called me and asked me to come over and take a look at him, which I did. He was big and looked pretty good and I did end up going back to his place and picked-up the horse.

“I told my friend I wanted to jog the horse for 30 days before I made my mind up if I wanted to buy him. I did and the horse showed me he had some speed and had potential. When I looked up his pedigree I saw that he had good bloodlines, so I took a chance on him. I don’t know if the horse had any serious health problems before he came to me but he was in good shape when I got him.

“Major Bliss was just very green and he’s still green. He doesn’t know yet what to do out there but he likes to race other horses. He always tries hard. That 51 mile he paced in Ohio impressed me but I still don’t think he’s bottomed-out yet. I believe he’s got more in him.”

Major Bliss has a half-brother who raced briefly on the Chicago circuit a few years back. Paradise Ragtime competed for trainer George Anthrop at Maywood and Balmoral in 2014 after the pacer won in 1:51.4 at Colonial Downs that summer.

Paradise Ragtime, a son of The Panderosa, went on to post 31 lifetime wins and did some racing on the Illinois County Fair Circuit for horseman William (Larry) Binkley of Charleston, Illinois in 2015 and 2016. The horse is currently owned by Jill White and Chris Brown, also both of Charleston.

Major Bliss has another half-brother with 37 career wins and is still racing at the age of 14 at Saratoga in New York. His name is Paradise Willie (1:53.2, $294,185). A son of Artsplace, he was the first foal Ballroom Bliss. An Ohio bred, Major Bliss is her eighth foal and he sold for only $2,000 as a yearling at the 2012 Blooded Horse Sale in Ohio.

Considering he has a brother still racing as a 14-year-old maybe at the age of six Major Bliss is just starting his own long racing career for the Herman Wheeler Stable. The end of this remarkable horse story could be years down the road.

The 39-year-old Harvard, Illinois native is well on his way to a second straight driver title at Hawthorne. He’s more than 30 winners ahead of his nearest competitor.

Casey had an even dozen winners at the four-program meet at Springfield when he made it back-to-back leading driver titles at the Illinois State Fair.

All the Way: The Jim Ellison Stable’s Vintage Babe was a front-end winner in Friday’s $13,500 Open Pace for filly and mares.

Driver Jim Lackey got Vintage Babe to the top at the first quarter (28 flat) and the 4-year-old mare went unchallenged through a pair of modest 29 quarters. The winner’s 26.4 final quarter was enough to hold off Fox Valley Charm (Mike Oosting) by three-quarters of a length in the 1:52.4 mile.

The Price is Right: John D Finn gave Pridecrest a ground saving trip and the 11-1 longshot came up the inside to win the $13,500 Open Trot by two-plus lengths in a career fastest time of 1:55.2.

Big Expense rallied for second while Bo I See Time came from far back to be third.

All About Cowboys sped to a 28.1 first quarter when he was pushed by Primed N Powerful. As expected the even-money favorite Banker Volo was sent out from the 10-hole but never could make the top and was parked out most of the mile before fading to eighth.