Perfection is what we all strive for in most everything we do. While it’s not realistic for a racehorse to be perfect throughout his or her career, staying flawlessness for as long as possible is always the goal.

For Curt Grummel’s filly trotter Marvelous Mystery staying unbeaten one more night would do a lot of for youngster’s first season earnings. A $25,000 deposit into her purse account awaits the talented two-year-old if the youngster can win tonight’s $50,000 Fox Valley Flan summer championship.

The Curt Grummel trained filly already has $28,222 on her card and thus far her best time of 1:59 flat, recorded in her elimination, is at least one second faster than any other filly in the Fox Valley Flan championship.

Early in her racing career, Marvelous Mystery has put up the credentials to come out on top once again. The filly has gone to the starting gate six times and greeted a track photographer for the winner’s circle picture each stint after every race.

Last week the daughter of Lou’s Legacy, out of the Tom Ridge broodmare Caitrin Hall, pulled away by more than five lengths at the finish of her Fox Valley Flan elimination for Carrollton, Illinois owners Curt, Craig, and Leo Grummel. 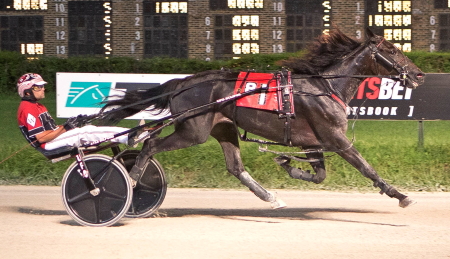 Marvelous Mystery will be guided tonight by her regular driver Kyle Wilfong when she scoots away from the five post. She’ll likely be pounded down at the betting windows just as she has been in all her pari-mutuel starts. The filly was sent off at 10 cents on the dollar a week ago and is listed at 4-5 in tonight’s morning line..

Among those trying to stop Marvelous Mystery from making it seven straight victories, is the Mike Brink stable’s Dawn Of Creation (pp 1, Casey Leonard), who won her elimination last week and was a strong second a start earlier in a Violet division.

Other serious threats appear to be the Roshun Trigg trained El Brae Brea (pp 6, Jamaica Patton), winner of five season starts and runner-up to Marvelous Mystery last week, and Fox Valley Lisbon from the barn of trainer Amy Husted. The latter raced without cover last week and could be a smoother journey away from pulling off an upset win.

“Tillie” a Competitive Final: The second $50,000 champion on the Saturday card is the seventh race Incredible Tillie final for ICF freshman pacing fillies.

U R My Shiningstar (Kyle Wilfong), Rags To Riches (pp 9, Wyatt Avenatti) and Lots Of Sass (pp 10, Archie Buford) are the longshot aspirants.

My Daddys Revenge is undefeated in four career starts for trainer Mike Brink and dominated her “Tillie” elimination field and her Violet division a start earlier.

The Magical Woman, with 2 wins and 3 seconds in 5 starts, has been a heavy betting favorite in every Hawthorne start, while Rona Mae, a stable mate of My Daddys Revenge, was passed in the lane last week and fought back for a 1:56 flat victory.

When the dust settled Fox Valley Jasper (Atlee Bender) stayed unbeaten thanks to a strong stretch rally in the Incredible Finale showdown for juvenile male pacers and Goomster (Kyle Wilfong) was the surprise winner of the Kadabra trotting final.

The 7-5 co-favorite Fox Valley Jasper was in eighth through the first half (57.4) as the other 7-5 betting choice Fox Valley Langley (Kyle Wilfong) made a bold move on the backstretch and took command before the field was halfway home.

Bender had Fox Valley Jasper rolling however the Erv Miller trainee had about seven lengths to make up. Fox Valley Langley looked like he was going to hold on in deep stretch but in the final stride it was Fox Valley Jasper ($4.80) who persevered for Illinois owners Bowie Racing (Shorewood) and Engle Racing of Illinois (Northbrook) and his now four-for-four in his young career.

Patience Pays Off: Patiently driven by Kyle Wilfong the 7-1 longshot Goomster ($16.60) wore down the 3-5 favorite Nico Man (Kyle Husted) to capture the $50,000 Kadabra summer championship for two-year-old male trotters by three-quarters of a length.

Wilfong (pp 3) dropped the Dennis Gardner owned and trainer youngster into fifth on the early going. When Nino Man came out of second to take over command on the backside, Wilfong had Goomster on the move as well.

Goomster raced without cover from before the half mile marker, reached in 58.3, and still was about two lengths behind the favorite at the sixteenth pole but put on a late surge to win it in 1:58.1 by three parts of a length for his West Salem, Illinois conditioner and proprietor.

Easy Does It: Hidden Assassin ($2.40), nicely rated by Travis Seekman, was an easy front-stepping conqueror of Friday’s $12,300 Open Pace in 1:514. The pocket horse Warrawee Veloce (Todd Warren), at 14-1, was second, beaten three lengths by the Rick Schrock trained winner.

Heath Bar (Jamaica Patton) was seventh at the three-quarter pole and still got up in time to capture the $12,300 Open Trot by one and one-half lengths in 1:55 flat at 12-1,