Congratulations go out to long-time horseman Tom Simmons who will soon attain a very rare milestone for an Illinois based trainer.  When Kelly D won Friday night’s first race it put Simmons one win away from his 2,000th winning horse as a trainer to go along with more than 2,000 winners as a driver.

Tom has 3,319 driving wins in his a long and distinguished career.

Simmons is the first Illinois horseman to achieve the fete since Joe Anderson accomplished it in the early part of this century when he was based in Illinois and dominating the trainer standings on the Chicago circuit and driving the likes of Big Tom, Ohyouprettything, Falcon Dakota, Million Dollar Bye, and Bingo Johnnie, just to name a few.

The 69-year-old Simmons began his driving career in the late 1970’s and by the mid and late 1980s he was operating a small stable while becoming a driving force in the Prairie State. 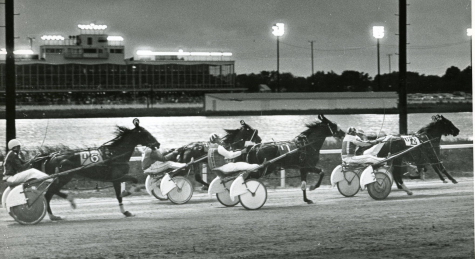 The Missouri native finished on top of the driver standings at Quad City Downs four consecutive years, 1983, 1984, 1985 and 1986 until some blonde kid from Wisconsin came to East Moline, Illinois and became new kingpin. His name: Dave Magee.

Simmons was always near the top of the driver and trainer standings at Fairmount Park, before the Collinsville, Illinois (near St. Louis) facility closed its doors to the Standardbred industry in 1999.

It was at Quad City Downs that Tom met his wife Benita, a track concession worker (the popcorn lady) and a big fan of her eventual husband of 37 years.

“We had seven horses in that night, so I had to turn down a TV interview (Chicago Harness Racing) because I was so busy,” said Benita. 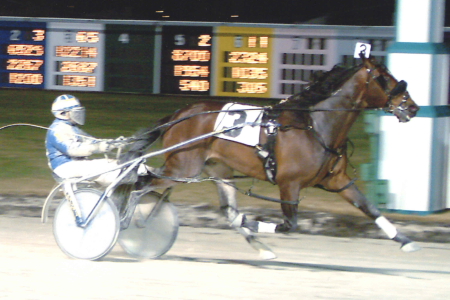 Constant Change gave Tom Simmons 38 training victories in an illustrious career with most of them coming at Maywood Park where the ICF pacer flourished on its half-mile turns. (Maywood Park Photo).

Simmons trained one of my favorite Maywood Park horses to write about in my 12 years there and that would be the ICF pacer Constant Change who loved the half-mile oval.  Tom also had Glass Pack; a one-time Maywood Park record holder.

“Constant Change is my favorite horse,” said Benita. “He could really get around those Maywood turns.”

The son of the late Illinois stallion Cole Muffler earned almost $600,000 in his seven or so years of racing for Simmons and took his mark of 1:49.4 as a four-year-old at Springfield, where the Tom and Benita reside.

Simmons was inducted into the Illinois Harness Racing Hall of Fame in 2006.

A Winning Return: The Donna Holt trained Rock It Out (Kyle Wilfong) made a successful return to Hawthorne last night when she captured the $10,000 Open II Pace in 1:53 flat.

Rockin Image ($4.60) is owned by D and R Racing Stable of Benton, Kentucky.

A couple of out-of-state gals are back in town with sights set on padding their bank account Saturday night at Hawthorne.

Those “gals” would be the Hoosier Park pacing invaders Rock It Out and U’ll Learn, both past winners at the local meet competing in the top Open.

This time around they’ll take on six other fillies in mares in a $10,000 Open II.

The seventh race feature is for filly and mare pacers written so it basically excludes seven-time Hawthorn Open winner Maggie Rhee who was scratched sick a week ago and missed her first opportunity to compete at Hawthorne in over a month.

Without “Maggie” tonight’s headliner looks like most of the play at the betting widows will go to the three outside horses in the field of eight, drawn by groups (1-6) (7-8) and that would be U’ll Learn (pp 6, Travis Seekman), Rock It Out (pp 7, Kyle Wilfong) and last week’s Open I winner Rollonbeauty (pp 8, Atlee Bender). 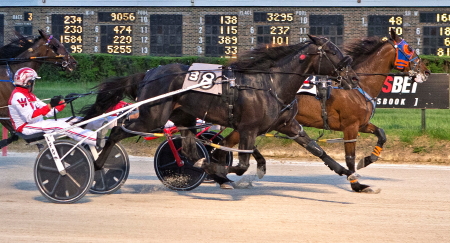 Rock It Out (inside) is shown here holding off Maggie Rhee (outside) in a May filly and mare Open at Hawthorne. The Donna Holt trained Rock It Out returns to the local scene for tonight’s Open II headliner. (Four Footed Fotos).

You might remember Rock It Out from earlier in the Hawthorne meeting. The four-year-old Donna Holt trained mare posted back-to-back Open I wins in the latter part of May, defeating Maggie Rae both times, with Kyle Wilfong at her lines.

Wilfong is back tonight to guide Rock It Out after steering Rollonbeauty to her Hawthorne triumph last weekend. Rock It Out does her best racing up close and probably will be hurrying out from the get-go tonight.

U’ll Learn, like Rock It Out, has spent most of the summer racing at Hoosier, nevertheless she did well in Hawthorne Opens in June and again in July, winning a mid-June headliner and earning purse checks in her other four local starts.

In her June 12th Open win the six-year-old Hector Herrera trained mare beat both Maggie Rhee and Rock It Out with a 1:51.3 clocking, pacing the last quarter in a quick time of 26.3, a nifty mile for a mare that was racing a year earlier in Ohio $6,000 claimers.

The three Illinois bred aged mares in the Saturday feature—Allbeastnobeauty, Dune Dame and My Uptowne Girl—are all likely candidates to return next weekend for the Night of Champion eliminations (or a prep) of the Tony Maurello Memorial stake, an event won in 2020 by the Todd Warren trained Allbeastnobeauty. 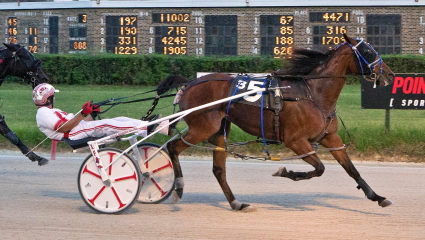 Staying Sharp: Speaking of the September 25th Night of Champions, quite a lot of state-bred pacers and trotters are participating on the Saturday card to stay sharp for Hawthorne’s showcase event on the final weekend of the 2021 meeting.

The most intriguing of those preps comes in the first race, a ICF two-year-old trot open to both fillies as well as colts and geldings with the females drawing inside.

The Charles Arthur trained filly Armbro Lark, currently the top point earner in the Fox Valley Flan Series, has the two slot with Arthur in the bike, while the top three point earners in the Kadabra trot for males—Lousdobb (112, Casey Leonard), Fox Valley Cairo (109, Ridge Warren) and First and Goal (100, Kyle Husted) landed the eight, seven and four posts, respectively.

Awesome Aussie: The Australian bred Braeview Bondi A (Atlee Bender) made it two-for-two at Hawthorne by winning last night’s $12,000 Open Pace with a quick 1:49.3 mile.

A fast early pace was anticipated but not expected was seeing Fox Valley Gemini (pp 5, Casey Leonard) getting command and the speedball He’zzz A Wise Sky (p 7, He’zzz A Wise Sky) having to drop into fourth in the early going.

Fox Valley Gemini took the seven-horse field to a 27 flat first quarter and a 55.1 first half before Bender took Braeview Bondi out of third. Racing first over with He’zzz A Wise Sky right behind him, the six-year-old Erv Miller trained gelding grinded his way to be along side “Gemini” turning for home.

In the lane the Braeview Bondi ($6.00) found another gear, pacing the last panel in a snappy 26. 2 and pulling away by almost two lengths from Fox Valley Gemini at the finish wire

Primo Giovanni (Todd Warren) was third as the 6-5 favorite He’zz A Wise Sky came up empty in the stretch and faded to sixth.

Braeview Bondi A is owned by Bowie Racing LLC of Shorewood, Illinois.

After knocking off the three-time Illinois Harness Horse of the Year Fox Valley Gemini a week ago the Australian bred invader Braeview Bondi A. takes on this year’s No. 1 Hawthorne Open pacer He’zzz A Wise Sky tonight.

He’zzz A Wise Sky ended Fox Valley Gemini’s streak as the “Top Gun” of ICF horses last year when the John Filomeno trained pacer took over the honor while competing as a three-year-old.

The way He’zzz A Wise Sky’s four-year-old campaign has been going the horse is the likely favorite to repeat as the best harness horse in Illinois for the 2021 season.

A victory in tonight’s Open Pace could go a long way for the pride of the Triple ZZZ Stable (Justice, IL) to repeat. Nonetheless, He’zzz A Wise Sky could have his hands full if last week’s strong winning performance by Braeview Bondi is any indication.

The heralded “Down Under” pacer was an impressive winner in his Hawthorne debut, taking air from the backside on before pulling away to a 1:49.3 mile for driver Atlee Bender, who along with his wife Hannah Miller Bender have been very successfully running the 50 horse Midwest Division of the Erv Miller Stable.

The Indiana based stable is second in wins at the Hoosier Park meet, however is first where it counts the most—in money earned with over $1.1 million in purse earnings. The Miller stable’s 27.3 per cent winning clip at the Indiana track is currently second best.

The newlywed couple (they tied the knot back in March) are also enjoying a banner meet at Hawthorne. The Miller barn is fourth in wins (28), third in money won ($209, 359) and first in winning percentage (23.7). 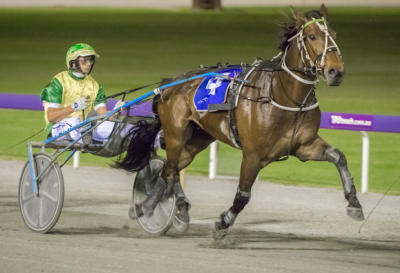 A Long Journey: To say that the seven-year-old Braeview Bondi has gone a long way in his five years of racing would be a bit of an understatement.

Up until March of this year the “Awesome Aussie” campaigned in Western Australia at the city of Perth, some 11,000 miles away from the Midwest portion of the United States.

Most of Braeview Bondi’s success in Australia came at Gloucester Park, quite a different harness racing venue than that of Hawthorne’s. The Australian track is a half-mile oval with a stretch of about 574 feet, compared to Hawthorne’s full mile track with a much longer 1,320 feet stretch.

Twelve horse fields (maximum of nine across in what they call the “front line”). Multiple tiers are commonplace in Australian races.

Strong Impression:  Driver Atlee Bender loved what he got from Braeview Bondi a week ago.

Maybe that’s because the mile distance might seem more like a sprint to him, I said half kiddingly. After all, longer distances of more than a mile are the norm in Australia and New Zealand racing.

No wonder Braeview Bondi wanted to keep “going, and going, and going.” That’s what the horse had been doing for his first five seasons of racing before making the long journey to the United States.