When the Merv Chupp Stable’s veteran trotter Pine Dream was retired prior to the 2022 racing season, his owner and conditioner faced a tough assignment replacing who I called the barn’s “money-making machine.”

Acquired for $27,000 at the 2018 Blood Horse Sale, the now 10-year-old Pine Dream raked-in over $300,000 for Merv and his wife Kelly, more than 10 times what they dished out for the Pinetucky trotter who Merv calls “probably the best sale buy I ever made.”

Pine Dream ended his racing career with 48 first place finishes, a mark of 1:53.1 taken at the age of six at Ohio’s Miami Valley Raceway, and earnings of $458,144, with much of that amount for the Chupp’s. 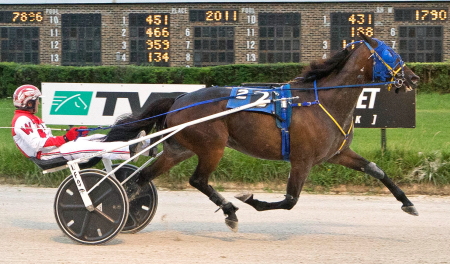 “The horse went through a surgery and a long layoff, and it was just time to retire him,” said Marv. “He’s earned it.”

Merv might have hit another sale goodie with last fall’s $14,000 purchase of the trotter Rock Party who will bring a three-race winning streak into Friday’s Open trot at Springfield.

The five-year-old son of Cantab Hall, out of the Muscles Yankee dam Scream And Shout (1:53.1, $302,734), has been perfect for the Chupp family on the Illinois State Fairgrounds dirt track with its sweeping turns, going 4-for-4 there this year.

Thus far in his first season for the Crete, Illinois based stable, Rock Party is a seven-time winner, mostly in Midwest track Opens, and is nearing the $50,000 plateau in purse earnings.

“Rock Party is a good trotter, but I don’t think he’s another Pine Dream,” added Merv. “He’s hard-headed but he has been better lately.”

Rock Party made just under $100,000 in his first three racing seasons and was highly regarded as a yearling, going for $90,000 at the 2017 Lexington Select Sale, so his successful 2022 campaign for Chupp isn’t exactly a bolt from out of the blue.

“I’m concerned about him after Springfield closes though,” continued Merv. “He’s not good in the turns. Hawthorne and Springfield are mile tracks that suit him.”

It Won’t Be Easy: Rock Party’s winning streak at Springfield landed him the assigned outside eight-post in today’s fifth race $12,300 Open and there are plenty of tough foes starting inside of him.

A surprise starter is the talented three-year-old Illinois bred filly Funky Wiggle, a strong candidate of the state’s 2022 Harness Horse of the Year award with her gaudy record of 9 wins in 11 starts and a 1:51.4 mile at Du Quoin, the second fastest ever for any ICF trotter. The streaking (eight in a row) Curt Grummel trainee was assigned the one-post against a field of older and more seasoned horses.

The “lock” for this year’s ICF 3-year-old male trotting honors will take on a small but solid field that includes the Dygert runner-up Fox Valley Cairo (Kyle Wilfong) and Reign And Shine (Travis Seekman), who drops out of Illinois Opens.

That’s It: The curtain comes down on harness racing in Illinois for this season today and it won’t return to the Land of Lincoln for nine long months. When it does in June of 2023 it will be at Springfield for another non-wagering meeting.

The return to Hawthorne and pari-mutuel betting in Illinois unfortunately won’t take place until next September.

A horse’s four-year-old campaign is often a pivotal one. Many horses don’t do as well the first go around against older horses as they did as a three-year-old. Some do. Rarely are they even better.

“Scorecard Dandy hasn’t had a bad race all year. The mare is always up to the challenge,” said trainer and part-owner Gregory Kain.

After making $35,622 as a freshman and over $60,000 as a sophomore, the Sportsmaster mare out of the Artiscape broodmare Mahna Mahna as added $123,090 to her card at four, finishing third or better in 24 of 31 starts with ten victories. 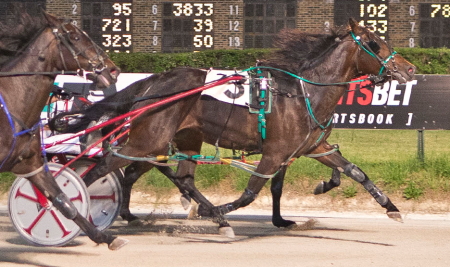 Scorecard Dandy has missed only one check in her nine-month campaign that started in early January at Hawthorne, making her a candidate for ICF aged pacing mare division honors along with its defending champion Fox Valley Exploit, the pride of the Kyle and Amy Husted stable.

“I really wanted to beat (Kyle) Husted’s horse on the Night of Champions,” said Gregory. “We had the lead in the stretch, but she got us at the wire. That’s how it goes in racing. We did beat her in the first Maurello final earlier in the summer, so we split the two ICF mare championships.

Scorecard Dandy will be after for her third consecutive win in today’s opener on the Illinois State Fairgrounds. Assigned the outside eight-slot. The mare is in pretty tough.

“She’s up against a good field Thursday, especially with Late Night Date back in Illinois for it. That mare was really good at Hawthorne, but we did beat her earlier in the season at Hoosier, so we’ll just see how things playout in Thursday’s race,” said the Green Acres (Beecher, IL) proprietor who shares ownership of Scorecard Dandy with Mike Klimas of Oak Lawn, IL.

Scorecard Dandy’s race today at Springfield will be her last for the 2022 season.

“I’m going to give her a deserved time off after Springfield closes” continued Kain.  “She’s been at it all year and I want to turn her out while the weather is still warm. I want to bring her back as a five-year-old and give her the opportunity to be even a little bit better next year.”

Scorecard Dandy has had no extended time off all season long.

The mare made10 starts at Hawthorne’s winter meeting that started in January, winning twice and then went straight to Hoosier Park in late March where she made nine more trips to the starting gate, with three victories including the $22,000 Mike Weller Memorial Final in 1:52.1 with Mike Oosting driving at 13-1 odds, beating Late Night Date with a new lifetime mark.

Scorecard Dandy went two-for-two in June at Springfield with Juan Franco at her lines. When Franco chose a different mare for the summer’s $50,000 Tony Maurello Memorial prep and final, Kyle Wilfong took over the driving chores in early July, winning with the mare three times to go along with a pair of second place finishes and a trio of thirds.

Two-time defending Illinois Harness Horse of the Year He’zzz A Wise Sky returns to the races Thursday afternoon at Springfield after a two-week layoff to make his second start in the last five weeks and his first since he was upset in the $62,000 Robert F. Carey Jr Memorial on Hawthorne’s September 10th Night of Champions.

“He’s about 90 to 95 per cent healthy right now,” said his trainer, John Filomeno. “When I send him to Hoosier, I want him at 100 per cent. Let’s face it, the competition at Springfield will be a lot softer. He’ll need to be sharp to take on the better horses in Indiana. ”

The pride of Triple ZZZ Stable of Beecher, Illinois, the Illinois bred speedball was caught in deep stretch by three-time ICF horse of the Year Fox Valley Gemini as the prohibitive favorite two weeks ago after missing the Carey prep event a week earlier with a fever.

“I almost scratched him out of the Carey final,” revealed Filomeno. “I didn’t make up my mind to start him until the morning of the race. The horse was a little short on the race but don’t take anything away from Fox Valley Gemini’s win, he’s an Illinois champion and has shown time and time again to be at his best in the big races. He was the better horse that night.”

He’zzz A Wise Sky’s problems starting a few weeks earlier in a $100,000 race at Scioto Downs.

“What could go wrong did go wrong in that race,” continued Filomeno. “He had a new driver who had the horse three-wide to the first quarter (25.4), ducked him into fourth, took him out, and then parked him out the rest of the way.”

He’zzz A Wise Sky ended up with a sixth-place finish and things didn’t get better for the homebred soon after.

“My horse was running a temperature, so I had to scratch him out of the prep. The reason for the fever was an abscess in his foot. We had to get it popped and healed before he could race again.”

Competing on all dirt Springfield oval should be helpful to He’zzz A Wise Sky, and for that matter any horse with a sore foot. The dirt track isn’t as hard as the clay and limestone surface at Hawthorne, which some drivers complained was often too hard this summer.

This will be only He’zzz A Wise Sky’s third lifetime start at Springfield and the five-year-old’s first since 2020. Since then, he’s lowered his mark to 1:48.3, taken earlier this year at Oak Grove in Kentucky, while his career purse earnings are closing in on the half a million-dollar plateau ($486,677) in less than four years of competition.

With over $167,000 in season earnings, and certainly more to come before he’s finished racing this year, and a 1:48.3 mile to his credit, don’t write off He’zzz A Wise Sky’s chances of a “threepeat” for Illinois Horse of the Year honors quite yet.

“He’zzz” back and he’s ready to start rolling again.

Filemeno plans on racing He’zzz A Wise Sky through the winter. “He won’t be starting every week. Maybe every other week or so,” said the 53-year-old Melrose Park, Illinois native. “The horse can pace as fast in the turns as he can on the straightaways so the extra turns on the Ohio tracks will suit him.”