Having quality and quantity is a good thing, especially with horses, and there’s no doubt that trainer Perry Smith as both going for him in the Late Closer Series for $5,000 male claimers.

The veteran conditioner has the morning line favorite in both divisions of tonight’s opening rounds with the former Illinois stakes champion Mystical Walter (Todd Warren) in the sixth race first split and the 11-year-old pacer Dontgetbyme (Ridge Warren) in the eighth.

In fact Perry might have the second morning line favorites in each series event and perhaps even the third betting choice as well.

All seven series hopefuls are also owned by Perry and will slug it out for the winner’s share of a $7,000 purse and finish high enough to gain points to earning a start in the series $9,000 Final slated for Thursday, May 6.

With the coupling of horses in a harness race seemingly a thing of the past on the Chicago circuit you’ll have to determine which one of Perry’s horses will prevail, or for that matter, which other non-Smith trained starter will prove best.

A second $7,000 round of the series is slated next Thursday. With the final field determined by money earned in the series, a victory tonight would lock-up a starting berth in the finale.

Did Perry foresee having four of his horses competing against each other in one and race three more in another?

“That wasn’t my plan when I nominated them,” he answered. “I was hoping there would be more than two divisions but that didn’t materialize. Maybe we’ll get more horses entered in for the second round.

In 2014 Perry annexed the leading trainer titles at both Balmoral and Maywood Parks. Last year he went over the 1,500 plateau in career trainer victories.

Not to be outdone, Springfield based trainer Mike Brink “one-up” Perry with right horses among the three divisions of  tonight’s opening round of the series for ICF trotters who are non-winners of two races as of April 1, 2016 or $10,000 lifetime.

Brink’s Prince Simba (Pat Curtin) is the 5-2 favorite in race one in my line where he’ll be joined by stable-mate Fox Valley Diamo (6-1, Casey Leonard). I’ve listed Brink’s Hail Caesar (Seekman) 7-2 behind Surviver DI (Steve Searle) at 5-2 in race three. He’ll drive his Chocolate Hare (8-1) in race 3 and assigned Pass The Plate (8-1) to Matt Krueger,

In race four I’ve got Brink’s filly Awfully Emotional (Seekman) at 7-2 while barn-mates Powerful Father (Todd Warren) is at 4-1 and Praise Singer (Pat Curtin) is at 6-1. 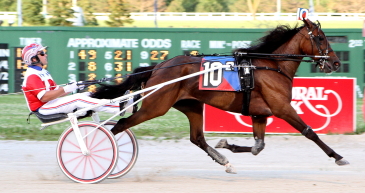 It’s only the first weekend of Hawthorne’s summer harness racing meeting but there had to be a lot of smiles at the in-town race track after a mutuel handle for its opener was better than most anticipated.

Almost $1.2 million was bet on the opening 12-race program and lets me honest, the card wasn’t exactly a knockout to entice the betting public with its trio of low-end trots, a couple of bottom conditioned paces, and a filly and mare feature that carried a modest $7,000 pot.

However, the track was able to card the large fields gimmick players love, and the Chicago area Standardbred fans, horsemen and owners had been waiting three long months for harness racing to start back up in Illinois.

Hawthorne’s racing office did the best with what it had to card the opening weekend programs with the vast majority of top-quality horses in the Midwest competing at the Casino enriched venues in Indiana and Ohio with purses that dwarf those in Illinois.

Nonetheless I wasn’t surprised by Hawthorne’s substantial handle numbers. I’ve never been a fan of a Chicago circuit season going 2 or 3 nights a week for 11 or 12 months instead of an opening and a closing of a meet with a number of racing months in between.

If a 2 or 3 day a week schedule dragged out for months was the way to go why wouldn’t the NHL or the NBA been doing it?

Also, a mile track racing basically in  Chicago (the city boundary ends across the street from Hawthorne Race Course), is going to bring in more fans and handle more money than a half-mile track near the city with its huge population or a big track in the far south suburban boondocks with its small populace.

The fact that The Meadowlands wasn’t racing and that about 10 of the other racetracks in the country going against Hawthorne at this time are either half-mile or five-eighths ovals, made the Chicago circuit track product a more attractive venture for the nation’s harness horseplayer dollar.

Fast Start for Casey: After nailing down his first Hawthorne driving title during the winter meet Casey Leonard started the  summer session with a four-bagger on Friday night, winning with Exclusive Design in the fifth, Jiggles The Clown in the seventh, Carmen O in the eleventh and Extravagant Art.

The 38-year-old Harvard, Illinois native didn’t waste any time visiting the winner’s circle on Saturday. Casey drove the 17-1 longshot Red Dog Ryan to his maiden win in the opener.

Later he won with the Leonard stable’s Dunside Sport in race 7 and Caffeine Kid in race 10. 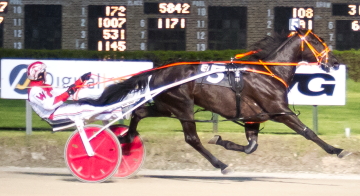 Somestarsomewhere was second best, beaten two-plus lengths in the 1:52.4 mile. The victory was Freedomformysoul’s fifth of the season.

The last four qualifier winners were all driven by Casey. Jewel Maker, and ICF freshmen champions Char N Marg and Dan D Dune, each are trained by Nelson Willis.