Homepage
You are here: Home1 / Mike Paradise2 / Miller Stable Looks to Double Up at Du Quoin

The Can’t Afford It filly is owned by Bowie Racing (Shorewood, IL), Engel Stable of Illinois (Northbrook, IL) and Mystical Marker Farms (Portage, Indiana) and Bowie and Engle Racing also share ownership of unbeaten Somestarsomewhere offspring Fox Valley Jasper, the ISFCS champ who will be gunning for his seventh victory without a loss in the $27,000 Director’s Award in the two-year-old male pace championship with Atlee Bender back at his lines.

Both champions were bred by Fox Valley Standardbred of Sherman, Illinois, quite a rare breeding fete. 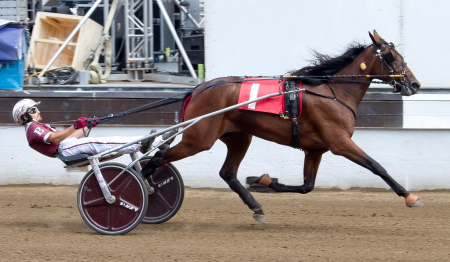 While Fox Valley Shana’s triumph over Marvelous Mystery can be considered an upset, the writing was on the wall going into the ISFCS showdown.

“Shania” drew nicely with the rail; Marvelous Mystery landed the dreaded nine-hole in a 10-horse field. Also, The Erv Miller youngster who didn’t make her first start until the July 23rd Fox Valley Flan elimination, was showing signs she had talent.

In the Springfield championship she was only beaten a half-length by the 40 cents on the dollar favorite and raised more than a few eyebrows with a rapid 26.3 last quarter, a very quick time from a state-bred freshman fill trotter.

“She got a little later start than most of the two-year-olds, said Atlee Bender. “She just wasn’t ready until later in July.

We knew she had ability, so we wanted to keep going with her and it paid off at Springfield. She really liked their dirt track. She’ll like Du Quoin’s as well.

Fox Valley Shania landed the pole position again Saturday while her rival Marvelous Mystery is in much better shape with the five post this time.

Meanwhile her stable mate Fox Valley Jasper was unbeaten going into the Springfield final, however his last two wins were photo finishes, the latter by his stablemate Illini Jetset (Todd Warren) who gave “Jasper” all he could handle a week ago. 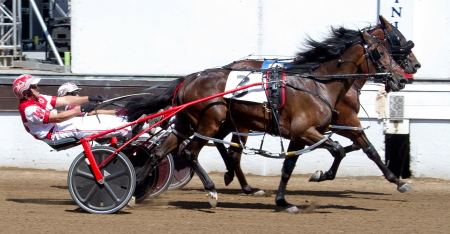 Fox Valley Jasper (inside, Atlee Bender) was a nose better than his stable mate Illini Jetset (outside, Todd Warren) in the Springfield championship to remain unbeaten. (Four Footed Fotos).

Jasper prevailed by a scant nose in a race that had plenty of action with five lead changes, three by Miller stable juveniles in the 1:52.3 mile.

“They keep on coming at us at different angles (in a race) but Jasper just hangs in there and gets it done,” said Attlee.

Bender knows he needs a big effort from Fox Valley Jasper if the youngster is to add a Du Quoin championship to his first season stake triumphs. It’s a gifted group of two-year-old Illinois breds this year and the stable’s Illini Jetset is one of them.

“He’s just a little smaller than some of his (freshman) stable mates but he has a powerful move,” added the 30-year-old Indiana native who this year has driven horses that have earned over $1 million.

Interestingly, both Miller freshman champions were bought for $9,500 by their ownership—“Shania” at the 2021 Walker Standardbred Sale and “Jasper” at the Illini Classic Sale.

With 15 entries the Director’s Cup was split into a pair of $25,000 Saturday divisions. Most fans will like the fact that the division leaders all landed in the first division.

The $7,000 aged trotting championships for ICF females and males are on the line tonight. Springfield distaff winner Reign And Shine (Jamaica Patton) and runner-up Annas Lucky Star (Kyle Wilfong) square off in race five while one event later Springfield champ Heath Bar (Jamaica Patton) looks to extend his current winning streak to four in a row in the horse and gelding division.