The abbreviated two-day harness racing meet at the Du Quoin State Fair comes to an end Wednesday but not before five more ICF championships are decided on an 11-race program that gets under at 11o’clock in the morning.

The $7,000 ICF pacing championships for older horses will go as races seven and eight with horses and geldings ages four and up going postward first. The seven horse field brings the first three Springfield championship finishers—Fox Valley Reggie, He Gone Jack and Fox Valley Nemitz in a seven-horse field. Looking to spring an upset are Cole Heat, Unimaginable and Dinky Dune.

The eighth race will crown the Du Quoin State Fair filly and mare pacing titleholder and it will consist of Cowgirl Too, Fox Valley Charliz, Prettyfaceuglyways, Susan Sage and Powerful Intense.

A trio of $25,000 stakes for younger ICF horses will follow as races nine, ten and eleven. They are:

Four freshman trotters—Louscardamon (pp 5, Mike Oosting), Lousraptor (pp 6, Ronnie Gillespie), Trixie’s Turbo (pp 7, John D Finn) and Big Garcia (pp 8, Casey Leonard) will get the vast majority of the public’s support and they should. Ths quartet of freshmen between them have won 19 of 32 starts and most of the major state-bred stakes.

Lousraptor flew down the lane at Springfield to take that championship in 1:56.4 and did it from the second tier, The Roshun Trigg juvenile previously had been racing on the County Fair circuit.

Louscardamon has been tough to beat when he stays on stride. He didn’t in his Springfield elimination but did when he won its Consolation and a Kadabra leg earlier for trainer Steve Searle.

Trixie’s Turbo, who can show gate speed, was second best at Springfield and the younger brother of Captain Greedy has never been worse than third in his six career starts for trainer Heather Stell. The freshman was a first leg winner of Hawthorne’s Kadabra stake series.

Big Garcia Vega is another who can leave in a hurry and he stayed sharp with an easy victory Sunday night at Hawthorne. The youngster was third in the Springfield final for trainer Roshun Trigg.

Meyer On Fire’s romping victory in this division’s Springfield Final along with the absence today of rival The Bucket has this Erv Miller trained sophomore at opening odds of 4 to 5. Mike Oosting is back at the son of Sagebrush’s lines.

Mr P M, driven by his trainer Cliff Bell, was third at Springfield and looks like one of Meyer On Fire’s main threats. Another is Maximus (Kyle Wilfong) from the barn of trainer Kim Roth. Maximus did beat Meyer On Fire in their Incredible Finale series leg on July 21 but drawing the second tier (post 10) pretty much put a damper on the freshman’s chances in the Springfield Final. 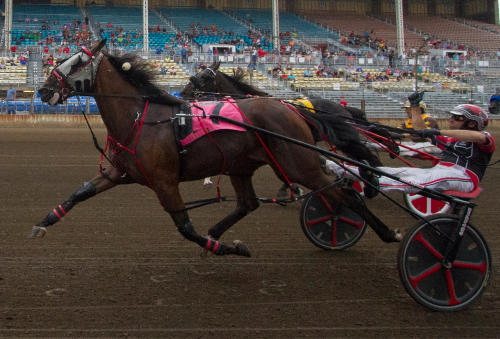 How fast of a first quarter will it take for a freshman in here to have command at the first quarter pole, probably a sub 27 first panel. That’s what it took in the Springfield showndown by You’remyheartrob when he left from the seven-post. Today he has the eight.

Outside of the Brett Wilfong speedy two-year-old trainee who ended Fox Valley Gemini’s unbeaten streak at 16 in a row in their Springfield elimination and again beat him in the final with back to back 1:50.3 miles is Al’s Briefs (Travis Seekman), third in the championship.

Springfield runner-up Backstreet Lawyer (Mike Oosting) is in the second tier (pp 10) behind the one-horse Song Cycle Senese (Kelcy Perymond), with No. 11 Sheriff Coffey outside. Can Backstreet Lawyer avoid traffic woes from his unfavorable post? A saving grace for The Tom Simmons trained freshman is that Song Cycle Senese can get away well and the pacer is sharp now.

Fox Valley Gemini, winner of 16 of his first 18 races, did not make the journey to Du Quoin and instead is getting some well-deserved rest.

First Day Wrap Up: Tuesday’s opening day Du Quin card was raced under sunny skies and hot temperatures (in the 90’s) with a strong stretch headwind of about 20 mph.

In the first of five ICF $25,00 stakes for either 2 or 3-year-old the Springfield champ Fox Valley Halsey took advantage of a pocket trip from driver Casey Leonard and proved fastest in the lane for trainer Nelson Willis in the Director’s Award stake for ICF freshman filly pacers.

The pace-setting Valar Morghulis (Juan Franco), another Willis trained filly, held on for second while Perch (Kyle Wilfong) came on for third in the 1:55.1 mile.

Leonard was content to take the two-hole behind Valar Morghulis who took the field to a 56.1 half. Fox Valley Halsey found racing room in the stretch with the inside lane, zipped through nicely, and won by a half-length for the third time in nine careers start for Illinois owners Cynthia Kay Willis (Beecher) and Ronnie and Jerry Graham (Salem).

Next up was the Shawnee for first season trotting fillies where E L Game On pulled off an upset victory for trainer Mike Rogers and owners Donald and Sherri Huddleston of Palmer, Illinois. The 7-1 winner was driver Kyle Wilfong’s fourth of the afternoon.

Driver Mike Oosting did a masterful job of getting the 6-5 favorite Louzotic to the lead going into the first turn from the second tier by lining his trotter up behind No. 4 Puddin Cheeks but his filly’s quick 27.3 initial quarter proved to be costly in the lane. Puddin Cheeks got a two-hole trip through the 57.3 half while E L Game On came out from the middle of the pack to race first up. 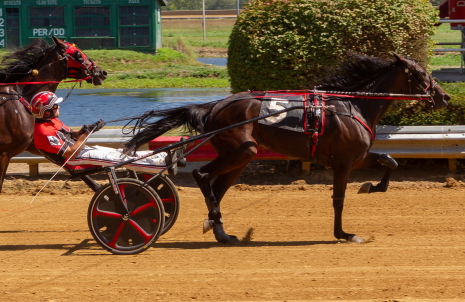 E L Game On ($15.80) kept grinding away, worn down a tiring Louzotic in the lane and put away a bid from runner-up Puddin Cheeks to pick-up her third season win in nine tries. Louzotic held on for third.

Allbeastnobeauty (Mike Oosting) followed her Springfield championship with the Time Dancer title and she was all-out to hold off Party Belle (Travis Seekman) to do so in the 3-year-old filly pace event.

Oosting had the prohibitive 1 to 2 favorite on the move on the backside where the Sportsmaster filly collared and passed the pacesetting The Sis Master at the 56.2 half and pulled away from the field by about six lengths.

However Allbeastnobeauty started to shorten her stride in the stretch when the filly went in to a strong headwind and was just a neck better than Party Belle at the wire. It was the third consecutive win for Allbeastnobeauty and her owner’s trainer Mike Brink (Springfield, IL), Josh Cater (Williamsville, IL), Mark Brown (Chatham, IL) and Lawrence Crawford (Port Joe, FL).

Driver Kyle Husted changed tactics in the Windy Skeeter with front-stepping Springfield victor Trotting Grace but the end result was the same, another championship for the 3-year-old trotting filly trained by Steve Searle.

With the 8-slot in an 8-horse field Husted took Trotting Grace back at the start while stable-mate White Pants Fever grabbed the lead and trotted a 56.4 first half. Trotting Grace followed up cover, went three wide in the last turn and then drew off for owners Bill Wright (Morton, IL), Mystical Marker Farms (Valparaiso, IN) and trainer Steve Searle.

The 2-1 second choice Maui Mama (Casey Leonard) was bottled up inside most of the race, doing well to shake loose in the stretch and put-close New Queen (Juan Franco) for second.

The 3-year-old ICF colt and gelding trotters were next in the Pronto Don stake and it had three different horses have command before the first quarter (29.2) with Illinimight (Casey Leonard) eventually taking control.

Majistic Caprice (Tyler Shehan) settled in second behind the Springfield champ Illinimight and later powered past in mid-stretch to prevail in 1:57.2. The Malabar Aqua sired winner is owned by Mississippians D & J Racing Stables (Terry) and trainer Roshun Trigg (Brandon) and now sports nine wins this year and 16 in less than two seasons of racing.

Anna’s Lucky Star (Kyle Wilfong) easily made it a sweep of the State Fair championships for ICF aged trotting mares. The Nelson Willis trained 4-year-old cruised to an eight length victory in 1:54.1 in the second non-wagering event.

In the first non-betting race Picky Picky Valor (Casey Leonard) held off a fast closing Dr Spengler (Mike Oosting) by a slim nose in 1:55.4 to capture the $7,000 ICF championship for ICF male trotters, age four and up.