The “He” we’re talking about Fox Valley Gemini, the pride and joy of the Terry Leonard stable, who is well on his way to a third consecutive Illinois Harness Horse of the Year title.

Fox Valley Gemini made the move to the older pacer category this season, a step up that many four-year-old pacers have found difficult, but not so for this ICF champion. Thus far he’s been just as dominant at Hawthorne in 2019, as he was there at the age of two and three.

In fact, he’s almost been too good at Hawthorne Race Course, where the son of Yankee Skyscraper has lost just once in 24 starts through his first two and one-half years of racing. 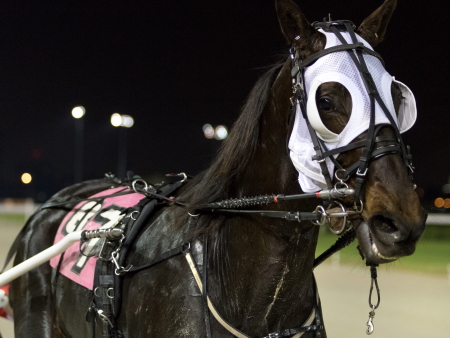 But make no mistake about it, Fox Valley Gemini loves Hawthorne. At one time “Gemini” captured 18 consecutive races on the big one-mile oval, all with Casey Leonard driving for Atwater, Illinois owner Jim Ballinger.

That streak was snapped in his initial pari-mutuel start as a 4-year-old, a race he needed after the winter off, but since then he has rattled off four consecutive Open victories against the best that Hawthorne has been able to offer.

On May 19 “Gemini” proved best by a hard-to-believe 10 and 1/2 lengths in that Open, and two weeks ago he was handicapped by the Hawthorne Race Office, with the 10-hole in a five-horse race and went from last to first in the lane in a 1:51 mile by motoring home with a sizzling 25.1 final quarter.

That assertive win earned “Gemini” a week without racing at Hawthorne in what could be called a “Time-Out” if he were a toddler. In this case, he wasn’t being punished for being bad instead he was reprimanded for being too good.

Once again Fox Valley Gemini will have to give the opposition basically a head-start. Tonight you’ll see six horse across, a space of three slots, and then the ICF star with his nose on the outside 10-slot.

The new wrinkle this week is that, the other six starters in the seventh race feature, are all 2019 newcomers to a Hawthorne Open, so this will be the first time “Gemini” will take them on as a 4-year-old.

Late Night Joke is a 9-year-old veteran, who had a number of very good years for the Ron Burke Stable. The Western Terror gelding was acquired in mid-April of this year by Dandy Farms Racing and FT Racing Stable, both of Glenview, Illinois. The horse boasts 31 career wins and over $358,000 in purse earnings.

Account Hanover is no stranger to Hawthorne. Last year as a 7-year-old the Rocknroll Hanover gelding split his time in 2018 in Ohio, Indiana and at Hawthorne where he picked-up 5 of his 8 season victories, including three in Opens, all with different drivers (Kyle Husted, Casey Leonard and Juan Franco).

Most times last year when Account Hanover looked over his back, he saw a different person in the bike. In 24 trips to the gate he had extraordinary 13 different drivers. California based driver Luke Plano will be at his lines for the first time tonight.

Tim Curtin Remembered: Friday’s sixth race tonight is the Tim Curtin Memorial, honoring the long-time Illinois horseman who passed away last week at the age of 61.