There’s a new number one atop the Hawthorne Open trot division and his name is Burrow, trained by Ross Leonard.

The Ohio bred four-year-old made an auspicious local debut last weekend, not just wining the Open Trot, but pulling away by more than three lengths in 1:55.4 with Casey Leonard at his lines.

A one-time $20,000 yearling purchase, the Uncle Peter gelding took advantage of a heady drive from Casey. Fortunate to land the pole position in his Hawthorne bow since he had six-figures in earnings on his card in his first three years of racing, Burrow was settled into third in the early going.

However, Casey didn’t wait long to take his trotter out and sickly grabbed command while Talk About Valor, winner of the previous two local starts, was taken back at the start, falling more than eight lengths behind the leader at the 58.3 half.

The lack of an early move by the Illinois aged champion pretty much determined the Gerald Hansen trained trotter’s fate (he ended up seventh, beaten over seventh lengths). 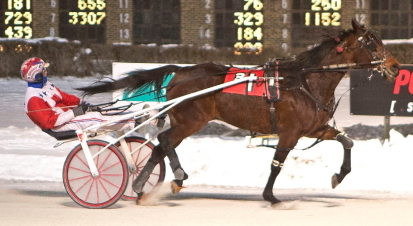 “I drove Burrow a couple of times last fall at Hoosier,” said Casey, “so I knew he was a good horse. As far as his first start this year in Ohio, I tossed that race out. He drew an outside post and with the layoff it was a little more than a training mile or a qualifier to tighten him up for his Hawthorne start.

Burrow should have his hands full tonight moving from he pole position to the six-slot in a seven-horse field with two-time local trot winner Simply Swan (Joey Swan) to his right after a two-week rest.

Burrow opens as the 5-2 second choice from post six with Simply Swan, with the seven as the 2-1 first flash odds.

Burrow will have to contend tonight with his recent stable mate Double A Goldrush, in from Ohio where raced very well. The now eight-year-old has been a fixture in the Ross Leonard stable for years while raking in over $350,000 for Illinois owners Michael and Laura Lee (Bridgeview) and Terry Lee Leonard (Harvard).

The Elegant Man gelding managed to land the pole position and while the trotter has raced almost exclusively in Indiana through the years, he’s made a trio of appearances at Hawthorne, the last in 2019, and came away with a pair of Open victories. 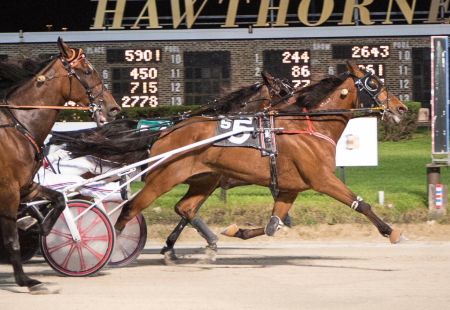 The veteran trotter Double A Goldrush makes a rare Hawthorne appearance tonight in the third race Open Trot. We last saw the Ross Leonard trained trotter in 2019 when he came away with a victory in our Open. (Four Footed Fotos)

When I saw the 15-1 opening odds on Double A Goldrush I choked on my coffee.

The trotter has the most career earnings in the field ($352,491), the fastest lifetime mark mile (1:53 flat), the favorable inside post and, has shown a likeness for a big track and didn’t make the 300 mile trip to get a look at the nearby Cicero, IL waste management plant.

Later in the evening (race eight), the five-year-old mare Maggie Rhee, trained by her driver Todd Warren), has her sights set on her seventh consecutive Hawthorne Open.

Last week’s rather easy triumph for Maggie Rhee came in her season debut after being on the sidelines for more than three months. The Jereme Jet mare was assigned the outside eight-slot but the way she has dominated at Hawthorne it likely won’t matter.

Too Fast:  Illinois champ He’zzz A Wise Sky (John Delong) was parked out to sizzling 26.3 first quarter in last night’s $30,000 Miami Valley Open and faded to eighth in his Ohio debut that went in 1:51.2.

Park Official (Kyle Wilfong) came flying down the lane in Hawthorne’s Open II Friday feature and popped at 10-1 0dds for owner and trainer Britany Dillion of Greenville, Michigan.  Jojo’s Amadeus (Mike Oosting) held on for second, beaten one length in the 1:56.3 mile contested on a” good” track.