Homepage
You are here: Home1 / Mike Paradise2 / No Moaning or Groaning from this Man

All of us at various times in our life meet with people who spend too much of their time whining.

You’ve heard them: “It’s too hot. It’s too cold. It’s too humid. The track’s too hard. My horses always draw bad.” If it wasn’t one thing it was another.

One of those people in our industry who definitely isn’t that kind of person is the Hawthorne based trainer John Hughes.

“You won’t ever hear me complain,” the Mississippi native said in a recent phone interview. “Not from me. I appreciate everything I have and I’ll keep working hard to make things even better for my family and myself.”

Maybe Hughes has such a positive outlook on life because he’s already been through rougher issues that most of us have never had to endure, or for that matter, even think about.

Hughes spent 19 years serving his country in the United States Army and while most of us never ventured more than a few feet from a television to watch clips of the endless wars in the Middle East, Hughes was thousands of miles away helping protect our freedoms and often doing so in “Harm’s Way.”

“I served two tours in Iraq,” said John, who is better known as “Man” by most everybody who knows the 42-year-old horseman. “The first tour was for 16 months and the second for 18 months.”

After 19 years of service Hughes was given a honorable discharge from the Army for “medical reasons,” explained the father of six (four boys and two girls). “I was shot in the leg and later I was diagnosed with Post Traumatic Stress Disorder.”

After hours and hours of therapy to deal with PTSD Hughes began working and driving harness horses and fell in love with horses doing it. “Horses have become my therapy,” said Hughes. While this is only his second year as a professional trainer, he has been involved with Standardbreds in his home state for several years. 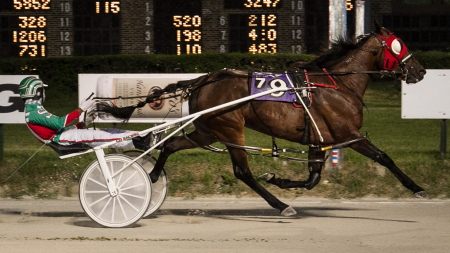 One of Hawthorne trainer John Hughes’s winners at the Hawthorne meet was the mare Full Of Laughs, showed here drawing off with Cordarius Stewart a couple of weekends ago. (Four Footed Fotos)

“We would all go to a small track and race for “bragging rights,” explained Hughes. “The horses are classified in races by age and gait and usually we would throw in 20 bucks each and race with the winner taking all. It’s a lot of fun and I’ve done well doing it in Mississippi. My horse Rockin Robert owns just about all the track records there.’

“Man” doesn’t have any secrets for his post military success. “I always told my kids to just go out and do your best no matter what you’re doing. I train my horses hard and I work hard.

“Some people have asked me why I’m already doing well at Hawthorne with my horses and I’ve told them it’s because I keep them as sharp as possible for their races. Make the money while you can. You never know if this Covid virus is going to affect us once more and maybe close us down again,” added Hughes who resides in Forrest, Mississippi.

Thus far at the meet Hughes has sent out 15 horses and only once (in a Hawthorne Open) did they come back to the barn without earning a check. He’s had three winners, four seconds and a trio of thirds. Last year, his first outside of Mississippi, Hughes sent 172 horses to the gate and they delivered 20 first and second place finishes each and 19 thirds.

“(Trainer) Jamaica Patton has helped me a lot since I’ve come up to Hawthorne. I like the place and the people here. I’ve gotten to know Cordarius (Stewart) better. He’s a young talented driver who is doing well now that he has gotten more good horses to drive.

“Last year Cordarius was almost always driving long shots. I told him over the winter I was going to have some horses at Hawthorne for him to drive that would be going off more like odds of 5-2 or 3-1.”

On June 19th Stewart brought home both Hughes’ Illuminati Hanover at 4-5 odds and his three-year-old Final Prize at 8-1. Two nights later another “Man” sophomore pacer Full Of Laughs won at even-money with Cordarius.

Hughes is the type of horseman you find yourself rooting for. You can’t help but love his upbeat infectious attitude.

I know I speak for many of us in our industry: Our heartfelt thanks for your service “Man.”

Springfield Takes Over: Races will be held at the Illinois State Fairgrounds in Springfield on July 7, 14, 21 and 28 with a noon post time. These events replace the races that won’t at Illinois county fairs in July.

Conditions for the July 7, 14 and 21 races are for ICF 2- and 3-year-olds that staked to the Illinois county fairs and for horses that staked to the Topline. IHHA races will also be held. All owners, trainers and drivers must be members of the IHHA.

The conditions for the July 28 races have yet to be announced.

Races Continue in July at Springfield John Hughes: A winner in his new career
Scroll to top