Homepage
You are here: Home1 / Mike Paradise2 / No Shortage of Cardinal Freshman Hopefuls

The earliest date for the Cardinal for ICF 2-year-old pacers since it was inaugurated by the Illinois Department of Agriculture back in 1984, didn’t put a damper into the number of entries for the Friday night stake.

With 17 Illinois bred pacing colts or gelding entered, the Cardinal has been split into a pair of $24,100 divisions, with the first going as tonight’s opener and the second as the seventh race.

Since this will be the pari-mutuel debut for all the Cardinal freshmen, it’s anybody’s guess who will make that first baby step towards a successful first season of racing and perhaps an appearance on the Night of Champions in September. 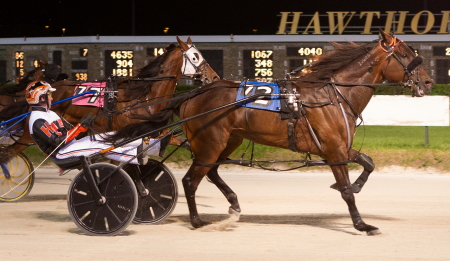 Terror Of The Nite, trained by his driver Kyle Husted, won a division of last week’s Open III Paces and tonight will seek his fourth victory in six starts at the meet in the fourth race Open II division. (Four Footed Fotos)

Hawthorne’s morning line favorites are Broken Halo (5-2), Fox Valley Minime (3-1) and Holden Steady (Kyle Wilfong). My price shot (programmed at 12-1), is Gary Rath’s Mooss despite his outside 8-slot. The colt finished nicely (28.2), in his Hawthorne qualifier.

The seventh race second Cardinal split looks like the tougher of the two divisions. The Ken Rucker Stable’s The Bucket should get a lot of play at the betting windows with the pole position after a game effort in his 2:00.2 qualifier at Hoosier Park.

Casey Leonard chose to drive the Sagebrush colt over the Erv Miller Stable’s Meyer On Fire (pp 7, Kyle Husted)) owned by the Marty Engel stable of Buffalo Grove, Illinois. Another son of Sagebrush, Meyer On Fire paced in 1:57.2 in his Indiana qualifier and he’s out of his owner’s broodmare Sleazy Babe. That makes him a full brother to Slzburgerslzburger (1:51.4) and Sleazeburgernfries, who took the same mark when he competed in Illinois a few years ago.

Both the Bob Sanders trained Sports Drama and Ryan Out Loud, from the barn of trainer Tim Simmons, come off winning events. Sports Drama won his qualifier at Hawthorne on May 31st in 2:02.2, coming home in 28.2. Ryan Out Loud debuted at Springfield last Sunday and posted a 2:03.3 first place finish with a 28 flat last panel. 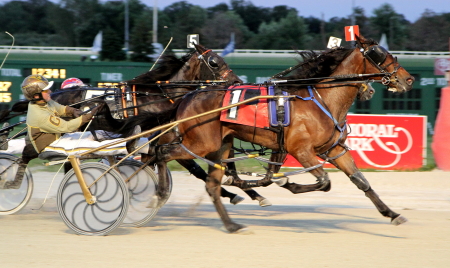 A Rosy Picture? A pair of $8,300 Open II paces will spruce-up the Friday’s Hawthorne card and they’ll go as races four and six.

The sixth race Open II will see the Hawthorne return of the 6-year-old Illinois bred pacer Royale Rose, who is now in the barn of Perry Smith. The Crete, Illinois horseman claimed the former ICF stakes champion for $35,000 last week at Hoosier Park.

Royale Rose is having a banner year. He’s raked in over $53,000 already and his win last week lowered his mark to 1:50 flat. As a 2-year-old Royale Rose proved best in a Hanover at Balmoral, the Cardinal at Maywood and the Springfield championship.

We last saw the Ashlee’s Big Guy gelding at Hawthorne on the 2016 Night of Champions when he finished second in the $100,000 Carey Final for trainer Lyle Scurlock.  Royale Rose then left for Hoosier Park and has raced in Indiana and Ohio since.

Another “old face” coming back to Hawthorne tonight is the Nelson Willis Stable’s Parklane Official (Juan Franco).  Last season as a 2-year-old, he posted all three of his wins at Hawthorne. This year he’s spent most of his time in Ohio where he has competed in some Ohio sire stakes.

Terror Of The Nite, trained and driven by Kyle Husted, popped at 12-1 when he rallied to win last week’s Open III Pace. It was the gelding’s third triumph in five starts at Hawthorne.