The filly and mare finalists for next Saturday’s Night of Champions were determined last night at Hawthorne with elimination races in three Illinois bred stake divisions.

However, the star of the program was the meet’s leading driver Kyle Wilfong who brought home seven of the ten winning horses on the card.

First up in the Night of Champions eliminations was the $12,000 initial division of the Fox Valley Flan for two-year-filly trotters and most eyes were on the overwhelming 1-9 public’s choice Marvelous Mystery, winner of her first eight career starts and the bridesmaid in the recent state fair championships at Springfield and Du Quoin.

Don’t let the Curt Grummel talented filly’s one length victory fool you. Marvelous Mystery ($2.10)) won under a hold by Kyle Wilfong after strolling to leisurely fractions of 30.2, 31 flat, and 30.1 before being asked to put a little more effort into the last quarter (28.3) of her winning 2:01.1 mile.

The 95-longshot Lou Sangreal was second best in Saturday’s opener. It was far back to the third-place finisher Lous Lexi Lou.  Also making the Fox Valley Flan $120,00 final were Dawn Of Creation and Mariah Lou. 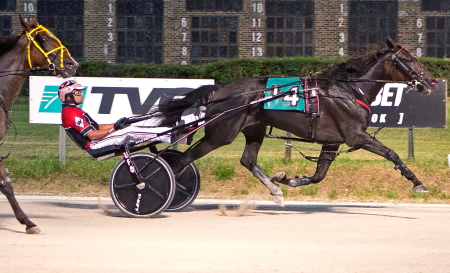 Marvelous Mystery, a daughter of Lou’s Legacy, is owned by Curt, Craig, and Leo Grummel, all of Carrolton, Illinois.

The second Fox Valley Flan grouping saw an end of the “chalk” brigade of winning horses when Radiant Diamond at 8-1 won a nose decision over the 37-1 longshot Zena Lou (Travis Seekman). The heavy 1-9 choice Fox Valley Shania (Atlee Bender) went off stride and will miss the championship.

Zena Lou got to the front on the backside and coasted to a modest 1:02.1 first half with Radiant Diamond in the middle of the pack. The pacesetter looked good half-way down the stretch, but the Rick Schrock trained Radiant Diamond grinded her way past in time for her proprietors Jodi Peacock (Cantrall, IL) and Carol Reynolds (Springfield, IL).

The Revenge Shark filly finished almost five lengths ahead of runner-up One R Andis Star for her Springfield, Illinois owners Lori Searle and Mike Brink. Also advancing to the $180,000 final were The Magical Woman, Some Dancing Star, and Ashlee’s Lil Angel.

My Daddys Revenge ($2.20) grabbed command at the quarter mile (29.3) pole, relinquished it to One R Andis Star, and came back to retake the lead at the 58.3 half. From that point it was a race for second place as the recent Du Quoin State Fair champ pulled away for her sixth win in nine career starts.

Rona Mae (Todd Warren) knocked off the 1-2 favorite Fox Valley Kia in the second “Tillie” elimination. The Mike Brick trained winner came from almost nine lengths back at the 58.2 half to race side-by-side with Fox Valley Kia down the lane before pulling away for a one and three-quarter length win in 1:53.3 for Joplin, Missouri owners and breeders Hugh Lake and Susan Lacey. 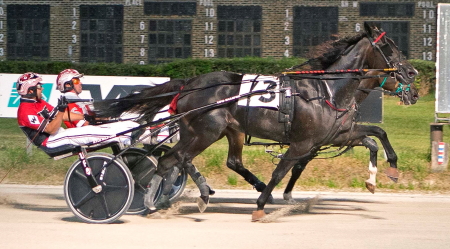 Wilfong picked up his seventh winner of the night when the 2-5 favorite Funky Wiggle overcame the second tier start and crushed her field in the Beulah Dygert Memorial elimination for ICF sophomore trotting fillies by more than six lengths in 1:55.2.

Wilfong did a heady job of driving the Curt Grummel trained filly, keeping her two lengths off the front row of horses at the start, dropping into fifth, and them coming out on the backstretch and mowing down the pacesetting and runner-up Ironclad Creation in the lane for breeder and owner Patrick Graham of Lockridge, Iowa.

Three Night of Champion prep races were sprinkled throughout the Saturday program.

The well-balanced Tony Maurello Memorial field for state-bred fillies and mares, age three and up, saw the Gregory Kain trained Scorecard Dandy ($6.80, Kyle Wilfong) put on furious rally to gain a half-length victory in 1:53.1; the Carl Becker Memorial trot for ICF aged mares went as expected to Annas Lucky Star (Kyle Wilfong) in 1:55 flat. The 1-5 favorite led from get-go and was never challenged in her 54th career victory; the Plum Peachy prep was the final race on the card and the three-year-old filly event was captured by Apple Valley ($5.20, Travis Seekman) with a 1:53.1 clocking.

Which Gals will Advance to NOC Finals? Like it says, “you just never know.”
Scroll to top