Homepage
You are here: Home1 / Mike Paradise2 / Not all ICF Stakes Worthy of Watching? 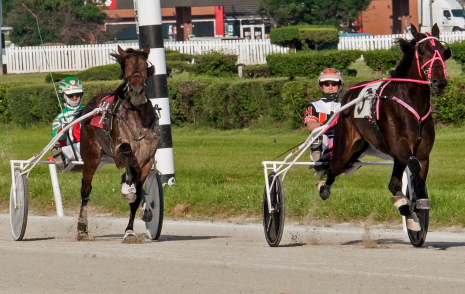 How competitive have the Illinois bred sophomore trotting categories been thus far? Well, so competitive that both the filly division as the colt and gelding class has produced three different winners in as many stake events.

In the opening round of the Beulah Dygert Fox Valley Extacy nailed down her maiden victory in the filly’s first start under the care of trainer Hector Herrera.

On the other hand, in the recent Violet trot divisions it was Steve Searle’s Bee Cee and Celone Hall, yet another Brink trainee who took co-championships.

Just what trotters this time around will prevail in Sunday’s second round of the two Dygert stakes is anyone’s guess.

Sunday’s Erwin Dygert was split into a pair of $12,500 divisions carded as races two and three last year’s Night of Champions winner Crooked Creek (Mike Oosting) a likely heavy favorite in the first split off his game 1:57.4 win a week ago. 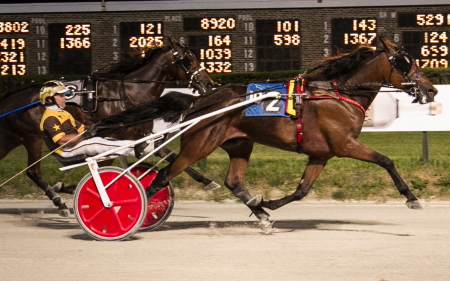 The Tom Simmons Fox Valley Quest (Casey Leonard) is the trotter too beat in the second division when he seeks his twelfth victory in 17 career starts. Desert Sheik (Brandon Bates), a first round winner of the Erwin Dygert, should also get good play.

There are also two $12,000 second legs of the Beulah Dygert to be contested tonight for sophomore state-bred fillies. The Violet one-two finishers Bee Cee (pp 1, Kyle Husted) and Tropical Rosie (pp 4, Cordarius Stewar)  head-up the sixth race second division, a state-bred stake you can watch and bet on.

It’s too bad you can’t watch and wager on the first division.

The first Beulah Dygert division is going as a non-wagering race before the regular betting program and is only available to be viewed by “essential” backstretch license horsemen. The only owners currently allowed on the backside are those who are also the horse’s caretaker.

So we’ll all miss seeing Princess Poprocks, She’s Got Moxy, Fox Valley Extacy, Lous Abigail, El Oh Govner and Celone Hall slug it out. Also hidden from view will be the initial legs of the ICF two-year-old trotting stakes, the $17,500 Fox Valley Flan for fillies and the $17,500 Kadabra for colts and geldings, both seven horse freshmen fields.

I’m deducing the track’s decision makers don’t see the trio of Illinois bred stakes as “wager worthy” enough has some of the fuller fields of open company events on the 14 race betting card.

Since Sunday’s three non-betting ICF only races begin at 6:30 pm, couldn’t we have kept that same first post time and made it a 17-race wagering program? The distributed purse money would be the same and the start and finish times wouldn’t change, either

Does anybody really believe keeping current owners from watching and wagering on their young Illinois bred equine investments is going to help the future of Illinois harness racing?

Princess Mooss (Kyle Wilfong) also closed with a rush to be second, beaten a half-length while the pace-setting Cleary The Bomb held on for third.

Connie On The Go is a home-bred daughter of Sportsmaster owned and bred by Ron Phillips (Athens, IL) and John Carver (Rock Island, IL).