By Mike Paradise
With the Governor’s Cup behind us and the third and last leg of the Night of Champion Incredible Finale series another week away, this is a quiet weekend for the majority of the top ICF pacing colts and geldings.

Most of the youngsters are getting the week off and being pointed for the Friday, September 13th final leg of the Incredible Finale series, to avoid competing on four consecutive weekends of racing that concludes with the Saturday, September 21st at Night of Champions finals.

However, for various reasons, some of the potential finalists will be slugging it out in Thursday’s first race and that’s the quartet of Canadian Mountie (Casey Leonard), RJ Wulfy (Ridge Warren), He’zzz A Wise Sky (Robert Smolin) and Western Perch (Travis Seekman).

Both Canadian Mountie and RJ Wulfy didn’t compete in the Governor’s Cup, so they had last week off and will use Thursday’s start as a prep race for the last Incredible Finale leg. They’ve also earned enough Incredible Finale series points (75 each), to have sewn up a starting berth in the championship. 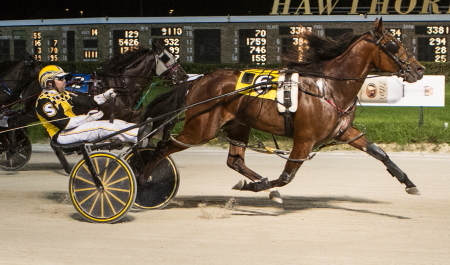 The Triple Zzz stable’s He’zzz A Wise Sky, captured the Governor’s Cup in come-from-behind fashion in only the homebred colt’s third lifetime start, so he has the “fresh legs” to race four weekends in a row. Thursday’s start will give the Yankee Skyscraper colt another beneficial race under his belt.

While his freshman foes began their racing careers in June or early July, He’zzz A Wise Sky didn’t qualify at Hawthorne until July 29th and he made his pari-mutuel debut on August 2nd where he showed potential, dropping a scant nose decision while pacing a 26.4 last quarter.

In his next start He’zzz A Wise Sky finished fourth and came home in 26.3.  Smolin gave the youngster a great trip in the horse’s third try, a winning 1:55.2 mile. Next, was last weekend’s Governor’s Cup, where the colt basically circled the field, coming from seventh at the half, some eight and one-half lengths behind, and drew off by one and one-half lengths over the heavy favorite Fox Valley Ren, again in 1:55.2.

Filomeno explained why He’zzz A Wise Sky got a later start than planned.

“He trained down perfect and was all ready to go when he got sick. The colt got a bad case of EPM. We had him treated at the track but that didn’t work. We decided to take him down to the University of Illinois vet school. They worked on him and got the infection cleared up.

“They told us the colt wouldn’t be able to race until the end of the year at the earliest. Instead he came back in six weeks and did it all on his own. I told Bobby (Smolin) in the colt’s first start to just use him at the end since the horse was coming off his sickness and he did just that. He can use him any way he wants now that the horse is perfect.”

Western Perch (Travis Seekman), is making his eighth career start for trainer Alan Bowen. The freshman finished third in the Springfield Final and fourth in the Governor’s Cup and he didn’t have to be used hard in either race.

While Canadian Mountie and RJ Wulfy have clinched a starting berth in the Incredible Finale final with 75 series points earned with a win and a second each in the first two rounds, a high finish in next week’s last leg is a must for He’zzz A Wise Guy and Western Perch if they are to advance to a six-figure championship.

Only the top ten series point earners will vie in the $120,000 (est.) championship. It’s a big drop money-wise to the stake’s consolation where $15,000 in purse money will be on the line.

Western Perch is currently listed 12th in points earned with 12, while He’zzz A Wise Sky is 14th with 8. Listed below are the current Incredible Finale point standings.