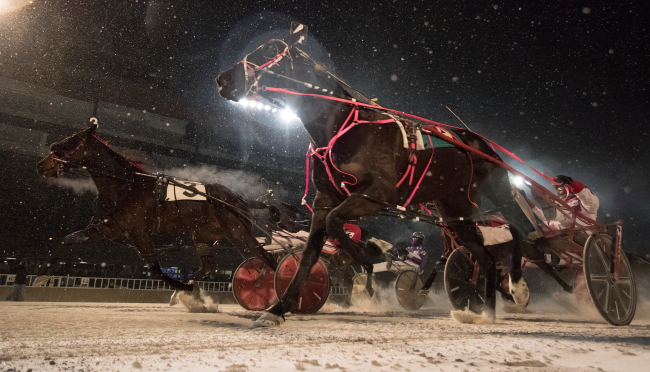 Last week’s filly and mare Cicero Claiming Series winner Her Royal Hotness (outside No. 3) and Fox Valley Bailey (inside) were noses apart at the end of their mile. They’ll tangle again Sunday night in the $12,000 Final. (Four Footed Photo).

Trainer Payton Ode is off to a terrific start at Hawthorne’s winter meet and Sunday night sends out major threats in both $12,000 Cicero Claiming Series Finals for horses that raced earlier with $6,000 price tags.

“It’s all about classification and I’m fortunate enough to have a good barn of horses for all levels at the winter meet”, said the 39-year-old Ode.

The stable’s Maserati Seelster opens as the 2-1 early favorite in the $12,000 Claiming Series for male paces. Kyle Wilfong is back to handle the Artistic Fella gelding who moved to Ode’s barn for the winter meeting.

“The owner of Maserati Hanover contacted me before the meet opened to see if I was interested in taking the horse to Illinois for the winter,” said the native of Silvis, Illinois who now resides in Anderson, Indiana. “I told him that I thought his horse would be a real good fit on Hawthorne’s bigger track in their $6,000 claiming series and he’s shown that he is” 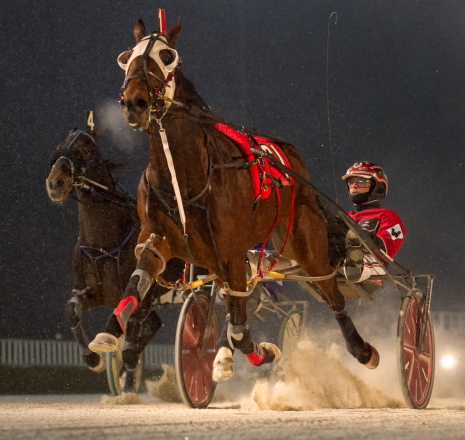 I wasn’t the only one surprised that Maserati Seelster wasn’t claimed in either of the first two rounds of the series, first for $6,000 and then for $7,500 in the second leg considering the success the pacer had last summer at Hawthorne at higher levels.

“We were too,” said Payton. “Maserati Hanover didn’t race well at The Meadows and his lines showed some breaks so that may have scared some people off. But he’s a much better horse on a big track. He doesn’t race well in the turns on smaller tracks. Those tighter turns tire him.

“He was claimed like four times last year at Hawthorne and at higher prices than he’s raced at this meeting. The horse has more back class than the other horses in the series and he showed it last week when he crushed them.”

“(Owner) Grant Wilfong called me and asked me if I would take a couple of his horses for Hawthorne’s winter meet. One of them was Her Royal Hottness, I looked at her lines and I thought she could be good in Hawthorne’s $6,000 claiming series for mares.

“Her Royal Hottness had never raced at Hawthorne and I got her right before her first start here. That first time she raced at Hawthorne she was looking all over at things and didn’t have her mind on racing. She made a break on the backside but when she did get back pacing she finished pretty good.

“After a week of jogging her on the track she got used to the surroundings. I thought she would be a lot better in her second Hawthorne start and she was (nosing out Fox Valley Bailey).”

Can You Bank On It? Sunday’s feature is $10,000 Open Trot where the 9-year-old gelding Banker Volo (p 7, Kyle Wilfong) looks to make a return visit to Hawthorne’s winner’s circle. The Angie Coleman trained trotter was assigned the outside post by the Hawthorne Race Office.

A Sparkling Performance: Narcian Jewel (Todd Warren), at 11-1 the longest shot in the $10,000 Open Pace for fillies and mares, drew off by almost three lengths to capture Saturday’s $10,000 feature for the Frank Petrelli Stable.

Wimple’s Dimple finished one length behind in the 1:58.1 mile while the 8-5 public’s choice November Rain came from seventh at the half mile pole to grab third in the second leg of the ICF series.

In other Saturday Late Closers, the 1 to 2 favorite Susie’s Soul (Todd Warren) was much the best in the first race Late Closer (#7), pulling away by more than six lengths in 1:55.1 for trainer and owner Jason Miller of Wabash, Indiana.

In the seventh race Late Closer (# 8) the prohibitive 2 to 5 favorite Rockin Praline ($2.60) won her second straight leg in the filly and mare series for trainer Tom Simmons and owners Red Barn Stable of Morrison, Illinois.

Driver Sam Widger pulled Rockin Praline out of third before the half and raced her first up through the last turn. The mare took command in the lane but had to go all out in the 1:55.1 mile to hold off a determined bid from the 30-1 longshot Beautiful Brew.