Homepage
You are here: Home1 / Mike Paradise2 / One Big Night to Go for Mississippi Native Tandem

By Mike Paradise
It’s already been quite a memorable year for the driver Jamaica Patton and trainer Roshun Trigg and the Mississippi native team would love to cap the season off with a victory on Saturday’s Night of Champions at Hawthorne.
After last week’s remarkable Thursday evening they certainly look like they have the ICF trotters to do it.
Jamaica was at the lines of all three of Roshin’s two-year-old trotting stake winners and they came in the first three races on the card. First Lousciper showed his heels to the opposition in first division of the Kadabra for freshman colts and geldings.
One race later the filly Lou’s Credit report stamped herself as one of the major threats in the $100,000 Fox Valley Flan Final when she pulled away in a fourth leg “Flan’ division. Then it was Lougazi who got his nose in front for the winning Patton-Trigg tandem in the second Kadabra division. 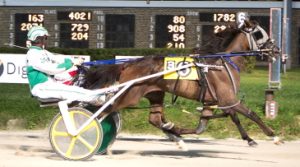 Lougazzi (Jamaica Patton) put it all together in time to earn a start on Saturday’s Night of Champions. (Four Footed Photo)

Lougazi went into last Thursday on the “outside looking in” as far as making the Kadabra Championship.
Lougazi was tied for 21st place going into the fourth and final leg series and needed a win to vault into the Top Ten and make the championship. The youngster did just that when he overtook the heavy favorite Polar B in the final stride of their meeting.
“You have to give Roshun a lot of credit for what happened last Thursday. He’s done a great job with those young trotters. He has them sharp and ready for me to drive,” said Jamaica.
All three of the Trigg trained winning freshmen are owned by their breeders, Flacco Family Farms of Alexis, Illinois.
“Last Thursday at Hawthorne will be a night I’ll always remember, that’s for sure,” continued Jamaica.
I asked the 35-year-old driver to give me his thoughts about the trio of Night of Champion two-year-old trotting hopefuls, all sired by Lou’s Legacy. 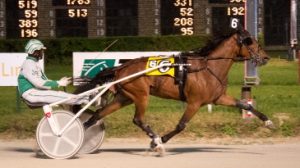 Jamaica Patton will be back at the lines of the the Roshn Trigg trained filly Lou’s Credit Report in Saturday’s Fox Valley Flan Championship. (Four Footed Photo)

“The filly Lou’s Credit Report likes to sit in the pocket and then scoot home. Hawthorne’s long stretch suits her”, he replied.
Lou’s Credit Report goes into the Fox Valley Flan Final with five victories in her first eight freshman starts while stable-mate Lougazi will carry a three-race winning streak into the Kadabra Final and is 6-for-12 in his first season.
“Lougazi is one of my favorites and I’ll drive him in the Final,” continued Jamaica. “He has gotten good at the right time. He’s one of those horses that can be kind of scary and hyperactive but he always has shown he has ability.
“He made a break in the first series leg at Hawthorne so we decided to take him to the fairs where he might get some wins that could build up confidence.”
That strategy certainly has worked out for Lougazi.
“Louiscipher is like the Cadillac of the trio,” added he native of Jackson, Mississippi who now resides in the village of Rochester, Illinois which is part of the greater Springfield, Illinois area. “He’s the easiest to drive. He likes to close and has done very well in his first season for Roshun.”
Louiscipher has been a model of consistency in his initial. Only once has the youngster finished worse than third in his 12 starts and he’s been one or two in 9 of those races.
Jamaica does have a history of doing well with “the ladies,” specifically those with four-legs who get around by trotting.
Patton is a two-time winning driver of the Lady Ann Reed 3-year-old-filly trot on Super Night at Balmoral Park, first pulling off a huge upset in 2008 with the 40-1 longshot My Birthday, a Herman Wheeler trained filly, and then in 2011 taking the big prize in 2011 with Joe Mullins’ Maplegrove Shaelyn.
“This has been a very good year for me,” said Patton.
And it’s not over yet Jamaica.
http://harnessillinois.com/wp-content/uploads/2021/03/ihha_logo_white_wtext_v2-300x130.png 0 0 Mike Paradise http://harnessillinois.com/wp-content/uploads/2021/03/ihha_logo_white_wtext_v2-300x130.png Mike Paradise2016-09-07 12:54:192016-09-07 12:54:19One Big Night to Go for Mississippi Native Tandem